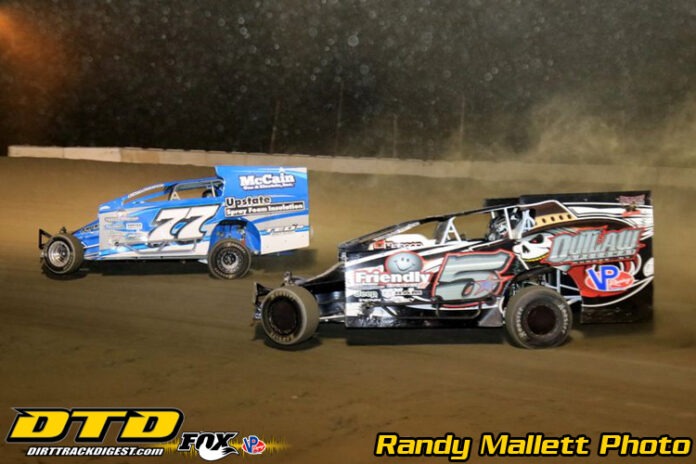 CENTER LISLE, NY –  Alan Barker and Corey Cormier stood tall on the opening night of the 2021 season at Thunder Mountain Speedway on a crisp, cool night.  Barker captured the Modified win, while Cormier took the honors in the DIRTcar 358 Modified main event.  Other winners on the night included Alan Fink in the DIRTcar Crate Sportsman, Steve Deinhardt in the Wheeler’s Excavating Street Stocks, Jared Green in the 600cc Modifieds, Mike Morse in the Pop’s Automotive Factory Stocks, Johnathan Fowlston in the Budget Sportsman, and Dom Kurchberger in the Junior Slingshots.

Barker was able to take the lead from Chris Jordan at the start of the 35-lap Modified feature while Nick Nye moved past Jordan two laps later to take second.  Brandon Walters also moved into contention, taking third on lap 9 as Tyler Siri ran in fourth.  Nye nearly spun in turn two and dropped back several spots, leaving Walters and Siri to battle for second, with Siri getting the spot on lap 14.  Siri chased after Barker in traffic, but a spin by Chris Curtis on lap 30 cleared the way for a five lap shootout.  Siri got the lead from Barker, but the pass was nullified by another caution, and in the final run to the checkers, Barker held off Siri for the win and a $1,992 payday.  Shaun Walker got by Walters in the final laps for third with Ryan Jordan rounding out the top five.

In the 30-lap DIRTcar 358 Modified main event, Alan Barker and Colton Wilson battled hard for the lead in the first half of the event, running several laps side by side until Wilson was able to drive away.  Tyler Meeks was part of a second group behind the leaders, battling hard with Shayne Spoonhower, Corey Cormier, and Glenn Forward.  Cormier picked his way past them as Barker fell back into that battle.  Cormier caught Wilson and they battled until lap 26, when Cormier was able to get underneath Wilson and then pull away for the victory.  Billy Dunn made a late race charge and snagged third from Barker on the final lap, with Spoonhower rounding out the top five.

Alan Fink started the DIRTcar Crate Sportsman feature from the 7th spot, moving up to take the lead from Hunter Lapp on lap 9 of the 25-lap event.  Tom Collins Jr was not too far behind Fink and the two fought for the lead through lapped traffic till a multi-car incident brought out the yellow on lap 20, which took Jamie Kamroswki and Brian White out of the event.  Fink withstood the challenges from Collins Jr to bring home the checkers, with Lapp barely holding off a hard charging Rich Talada for third.  Jake Mason took the fifth spot.

The 20-lap Wheeler’s Excavating Street Stock race went the full distance with no caution flags.  Deinhardt started on the pole by virtue of a redraw and distanced himself from a battle between Lasnon Albanese and Jerry Lobdell Jr for second that lasted past the halfway point.  Albanese was able to wrestle the runner-up spot away and in the closing laps showed a nose under Deinhardt a couple of times, but had to settle for second behind the pole sitter at the checkers.  Lobdell Jr, Damon Decker, and Don Russel rounded out the top five.

Jared Green led all 20 laps of the 600cc Modified feature, but it was far from easy for him to earn the win, with several top runners battling to run him down in the second half of the race.  Brett Gray emerged from the pack to close in on Green in the final three laps, but the young driver maintained his poise and brought home the win over Gray, Justin LaDue, Jake Waibel, and Dana Davis.

In the Pop’s Automotive Factory Stocks, Mike Morse was the dominant car, drawing away from the field at the start and pulling out a full straightaway advantage in another non stop feature event.  Josh Towner, Jason Rhodes, Buck Mills Sr, and Shawn Sabo completed the top five.

The 15-lap Budget Sportsman contest was led wire to wire by Johnathan Fowlston, as he paced Jeremy Hamilton, Jordan Millard, and Eric Winsor to the checkers.

The 10-lap Junior Slingshot feature was a great race between Dom Kurchberger, Evan O’Hara, and Liam Zacharias, with Kurchberger holding off repeated challenges from O’Hara for the victory, with Zacharias taking third spot.

Racing continues at Thunder Mountain Speedway on Saturday, May 8th with a regular race program.  For more information, visit www.thundermountain.net.