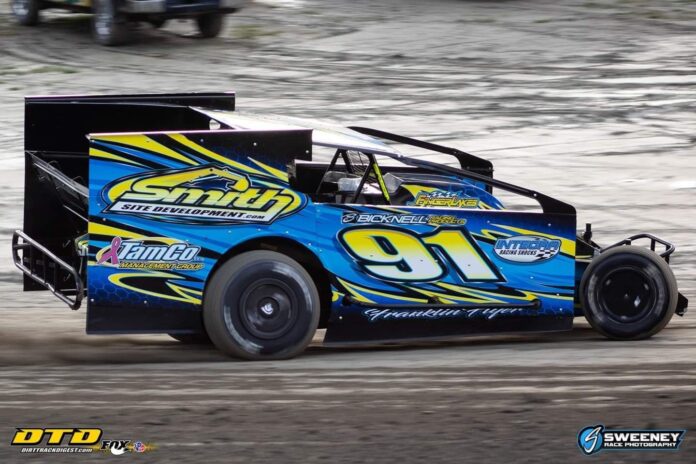 CENTER LISLE, NY – Billy Decker and Larry Wight visited victory lane at Thunder Mountain Speedway, winning the Modified portions of the night’s program. Decker claimed his triumph in the Open Modified 35-lap feature after a late charge by Shawn Walker, while Wight took the checkered  in the DIRTcar 358-Modifieds after a fight with Rusty Smith.

Jeff Taylor held command over the field through the first handful of laps in the Open Modified main, but a quick moving Walker slid into second from seventh early. On lap 8, the lead went to Walker, with Alan Barker and Kenny Hammond following through.

Decker was making some headway, sliding by Hammond for third on lap 14. Up front, Walker held steady over Barker, the lead fluctuating some depending on lapped traffic. Decker was a fair bit of space back in third, but a lap 24 yellow condensed the leaders.

On the restart, Decker jumped up top, instantly disposing of Barker for second. With Walker down low, Decker stayed married to the cushion, tracking down Walker and grabbing the top spot on lap 27. From there, Decker kept his foot down, leading the final seven circuits en route to the Open Modified win. Walker brought it home second, followed by Barker, Nick Nye, and Hammond.

In the DIRTcar 358-Modified division, the 30-lap main was headlined by a Wight and Smith battle that lasted the entire distance. Wight got the jump on Smith from the outside pole, which set up their fight.

After being moved back a spot following a jumped start, Smith wasn’t putting tough pressure on Wight for some time, but by halfway, Smith had turned up the wick. A couple late yellows kept the leaders out of traffic, but that didn’t give Wight any breathing room, as Wight beat Smith to the finish by under two-tenths of a second. Behind them, Colton Wilson, Dave Marcuccilli, and Jeff Taylor.

“We were definitely off in the Open Modified by quite a bit, but the 358 was good enough,” Wight said. “I think Rusty was definitely better than us, but when his jumped restart was given back to us, that gave us control of the race again. I think I just missed it a little on the new surface, we weren’t as quick as we were when we were here last season, but good enough to grab one win.”