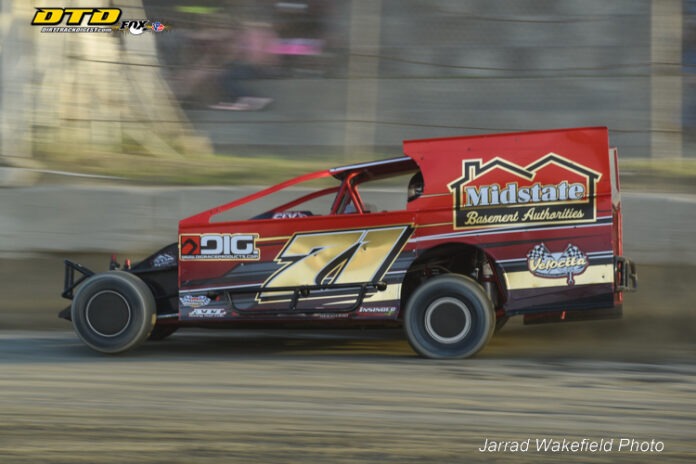 CENTER LISLE, NY – A number of drivers picked up their first wins of the 2021 season on a warm, summery Saturday night at Thunder Mountain Speedway.

The 35-lap Modified feature was led by Chris Jordan for the first four laps until Landon Cummings slipped by to take the top spot.  As Cummings led, Jimmy Zacharias worked his way to the second spot on lap 12 and chased him down, battling him for several laps.  When Nick Nye dropped out on lap 28, that moved Alan Barker into the top five and put him hot on the heels of Kenny Hammond and Darren Smith.  The leaders got into lapped traffic in the final five laps, and Zacharias used it to slide under Cummings and take the lead in turn one of the final lap.  Cummings broke on the backstretch and did not finish as Zacharias was followed by Ryan Jordan, Hammond, Smith, and Barker.

In the DIRTcar 358 Modified feature, Billy Dunn rocketed past Glenn Forward on the first lap of the 30-lap race and pulled a full straightaway lead over a battle between Forward, Shayne Spoonhower, Jordan McCreadie, and Tommy Collins Jr.  Only one caution flag slowed the pace when Corey Cormier’s car stopped in turn 4 on lap 14, which put McCreadie alongside Dunn for the restart.  Dunn once again pulled away and took his first win of the season, with McCreadie holding off a late race charge from Forward for second.  Collins Jr bested Spoonhower in the race for the 4th spot.

Cody Jackson led the early stages of the 25-lap DIRTcar Sportsman feature until Jordan Millard passed him on a restart.  Todd Heyward moved into third, but was passed near the halfway point by Daryl Krebs, and Heyward’s steering failed at the halfway point, knocking him out of the event.  Millard extended his lead over the final laps for his first win of the season and his first in the DIRTcar Crate Sportsman category.  Krebs was second, followed by Jake Mason, Mike Austin, and Alan Fink.

The 600cc Modified feature began with Devon Green taking the lead, but Doug Windhausen came from his 6th starting spot to take the lead on lap 6.  Green spun in turn two one lap later.  A fierce race-long battle between Justin LaDue, Chris Jordan, and Tom Donahue was joined in the late stages by Brenton Miller.  Donahue eventually grabbed second and had a chance on a lap 16 restart at the leader, but the 2020 track champion was up to the task as Windhausen became the 5th different winner in the division this season.  LaDue nabbed third behind Donahue, with Jordan and Miller following in fourth and fifth.

In the 20-lap Wheeler Excavating Street Stock feature, contenders fell by the wayside early, with former winners Lanson Albanese and Steve Dinehardt out by lap 5.  Mike Wilbur led the rest of the distance and held off repeated challenges from Damon Decker for his first win of the year.  Tommy Paige, Doug Stack Sr, and Doug Stack Jr rounded out the top five.

Mike Morse again had a dominant car in the Pop’s Automotive Factory Stocks, jumping into the lead before one lap was complete and motoring away to another win.  Buck Mills Sr, Josh Towner, Shawn Sabo, and Shane Moshier completed the top five.
Eric Winsor held off Jeremy Hamilton for 14 of the 15 laps in the Budget Sportsman feature.  Hamilton made a pass attempt in turn 3 on lap 13 only to spin, but kept going.  Winsor cruised to the win, his first ever, followed by Tres Palmer, Steve Schrader, Johnathan Fowlston, and Hamilton.

Evan O’Hara traded the lead with Andrew Decker in the Junior Slingshot feature, with O’Hara regaining the top spot on lap 8 to capture the win.  Logan LaDue outran Tyler Paige for the Junior 600cc Modified honors.  Special thanks to Casper’s Diner of Groton, NY for providing additional cash awards for the divisions’ heats and features.

Saturday night, June 11th, racing continues at Thunder Mountain Speedway with all of the regular divisions in action.  Tuesday night, June 15th, is the first midweek special event at Thunder Mountain, sponsored by Snake Creek Marine, as the Modifieds compete in the “Mr. Ford” Mike Colsten Memorial, a 51-lap feature event paying $5,100 to the winner.  The DIRTcar Crate Sportsman and Budget Sportsman will also be in action.  For more information, visit www.thundermtnspeedway.net .