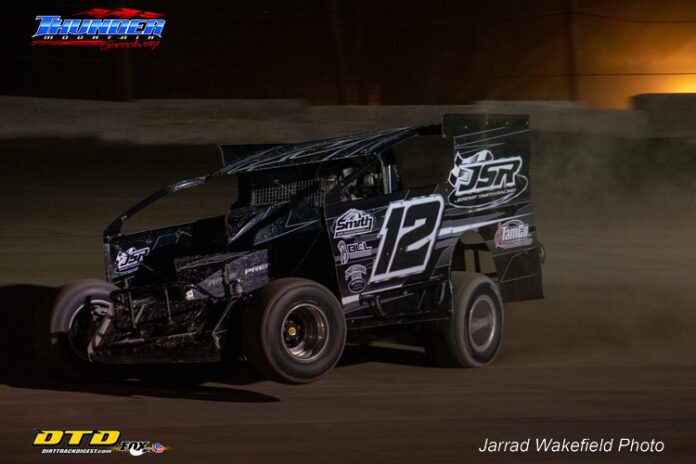 CENTER LISLE, NY – The Mike Colsten Memorial at Thunder Mountain Speedway is a great reminder why the name of a driver isn’t written on the winner’s check until the checkered flag falls. While Sheppard seemed to be cruising to the win, a last-lap spin meant Darren Smith took a trip to victory lane.

Smith was the man in control through the first half of the 51-lap feature event, with Cory Costa hanging within shouting distance. Behind Costa, a pair of fast cars were making moves, with Sheppard battling Eric Leet for third, and Billy Decker steadily making his way through the pack. By lap 20, Sheppard had solidified third, while Decker was working on Leet.

Once Decker got by Leet on lap 30, the race kicked into high gear. Both Sheppard and Decker quickly caught Costa, with Sheppard pulling a high-low crossover to take the runner-up spot on lap 35. Decker followed suit right behind to snag third, but Sheppard had already exited that battle. Smith didn’t have much of a buffer between himself and Sheppard, and with lapped traffic looming, Smith had his work cut out for him if he wanted his biggest win yet.

Sheppard caught Smith, and after a couple laps of analysis, Sheppard chose the top and powered to the front on lap 42. From there, Sheppard throttled down, opening up a solid lead in a hurry. As the white flag waived, Sheppard seemed to have the win bagged, but entering turn one, Sheppard’s rear end appeared to lock up. Sliding in front of a lapped car, contact was made, and Sheppard’s left rear tire went flat. With Sheppard facing backwards, the caution waived, and Smith regained the lead.

With a one-lap dash, Smith nailed the restart, crossing the line ahead of teammate Decker to score a Jeremy Smith Racing 1-2 in Thunder Mountain’s first big show of the season. Costa claimed third, with Rusty Smith and Alan Barker completing the top five.

“We had a good car all night, but that was something,” Smith said, seemingly a bit in disbelief of the finish. “I know my dad Jeremy is watching this one, I hope he liked that. Tonight was a good reason why I’d rather be lucky than good, and we got lucky a few times tonight.”

Rusty Smith was asked by Kinser Hill’s team to drive their DIRTcar Crate Sportsman, and he returned the favor by starting from 16th and avoiding an opening lap wreck that damaged several cars to take the lead from Jordan Millard on lap 19 of the 30-lap feature and cruise home for the win.  Millard, who led the first segment of the feature, was the runnerup, with Corey Cormier holding off a late race charge from Kreg Crooker to take fourth, while Grant Hilfiger finished fifth.

In the 20-lap Gary’s U-Pull It Budget Sportsman feature, David Dickey too the lead from Johnathan Fowlston to take a wire to wire win.  Fowlston, a three time winner in the division, dropped out with a steering issue while running second on lap 9.  Steve Schrader then got the second spot and held it to the checkers behind the winner.  Eric Winsor, Dylan Hartman, and Ethan Decker rounded out the top five.

Racing action continues at Thunder Mountain this Saturday, June 19th with all the regular divisions in action.  For more information, visit www.thundermtnspeedway.net .