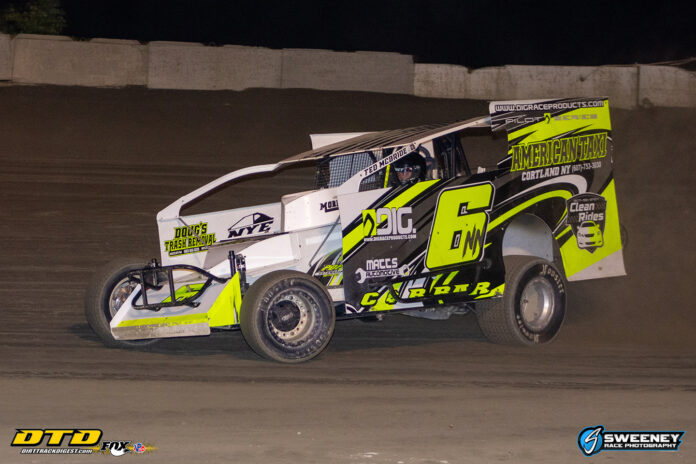 Lance Willix led the opening few laps to the 358-Modified feature, but a high-flying Matt Meade took the top spot just three laps in. After starting 7th, Dunn methodically but quickly picked off cars, sliding by Willix and into second on lap seven. By the time Dunn got to second, Meade was already a full straightaway ahead.

By halfway, Dunn had nearly erased the lead, and began applying pressure to Meade. With Meade continuing to chug along up top and Dunn down low, the lanes lapped cars would run had a major influence. With the first lapped car sliding high, Dunn was able to use the lapped car as a pick and slip by Meade on lap 20. Once out front, Dunn pulled away, cruising to his second win of the year at Thunder Mountain. Meade finished second, with Willix, Glenn Forward, and Colton Wilson rounding out the top five.

“I wasn’t too sure if I could chase him down,” Dunn said. “He was rolling the top and I was on the bottom, and in the heat race I felt like I was the best car on the bottom. We were better on the better part of the track when it mattered. We’ve been good here recently, we found some speed, but it’s been a little tough elsewhere so hopefully this gets us pointed the right direction.”


With one Modified race complete, the next rolled on track. Larry Mekic showed the way at the start of the Open Modified main, with Eric Leet in tow. Things didn’t stay stagnant up front for long, as on a lap four restart, Nye went to the cushion and drove from fourth to the front by the time the leaders exited turn two. Mekic settled into second, but Nye pulled away during the following green flag run.

A couple quick cautions during the middle portions of the race gave Mekic and Leet a few swings at Nye, but Nye held tough on all restarts. Unfortunately for the rest of the field, as the laps clicked off, Nye only got quicker. Mekic remained close enough to see Nye, but from Leet on back, Nye was a memory. With the checkered flag waiving, it was Nye grabbing his first win of the year over Mekic, Leet, Ryan Jordan, and Kenny Hammond.

“I’m not sure how much better the car could’ve been there, it was pretty hooked up,” Nye said after his first win of the year. “We just got out front early and let them battle it out behind us and set sail. After getting out front it was pretty smooth sailing. I have to thank Bicknell, Dig Race Products, and all my sponsors for getting this car so good.”

Hunter Lapp led the entire 25-lap distance in the DIRTcar Crate Sportsman feature, but it was far from easy for him, as he had to hold off point leader Alan Fink over the last 10 laps of the event.  Lapp maintained his poise and held his line to take his first win of the season, with Fink literally on his back bumper as they crossed the line.  Cody Jackson was a distant third, with a stellar drive turned in by Brandon Carvey, who started 20th and made it to fourth at the finish, with Rich Talada in fifth.

The 600cc Modified feature was led by Aiden Miller for the first five laps, but Jake Weibel slipped under him on lap 5 to take the top spot.  While Devon Green and Justin LaDue battled, Brenton Miller came from the 12th starting spot and diced his way past all of them to get second on lap 9.  Miller and Weibel diced the rest of the way, with Miller making the winning move coming off turn two on the final lap.  At the checkers, Miller became the division’s first repeat winner of the season, with Weibel a close second.  After post race inspection, Weibel was disqualified, which moved Devon Green to second, Justin LaDue to third, Jared Green to fourth, and TJ Smith to fifth.

Don Russell was the leader at the start of the 20-lap Wheeler Excavating Street Stock feature, but it didn’t take long for Steven Deinhardt to move past him and motor away to a win.  Russell held off Jerry Lobdell Jr for second, with Tom Paige finishing fourth.  Lanson Albanese roared back after an early spin to round out the top five.

The 15-lap Pop’s Automotive Factory Stock contest saw Jason Rhodes get some redemption.  After leading most of a feature earlier this season, only to have the car break coming to the white flag, Rhodes went the distance to take his first win of the year over multi-time winner Mike Morse.  Josh Towner took the third spot, followed by Buck Mills Sr and Jason Beebe.

Eric Winsor was in the right place at the right time when race long leader Steve Schrader tangled with Jeremy Hamilton a few laps from the finish, and he held off Chris Clemons for his second Gary’s U-Pull-It Budget Sportsman win of the year.  Ethan Decker, Josh Akshar, and Mike Goodwin rounded out the top five.

There will be two days of racing at Thunder Mountain on 4th of July weekend.  Saturday, July 3rd is the ‘Red, White, and Blue’ Special with a $1,776 to win event for the Modifieds, plus the other regular classes will be in action, and there will be a fantastic Fireworks show.  The following day, Sunday, July 4th, will be the Randy Decker Street Stock Shootout, a 50-lap affair paying $2,500 to win.  The DIRTcar 358 Modifieds and 600cc Modifieds will also be on the card.  For more information, visit www.thundermtnspeedway.net .