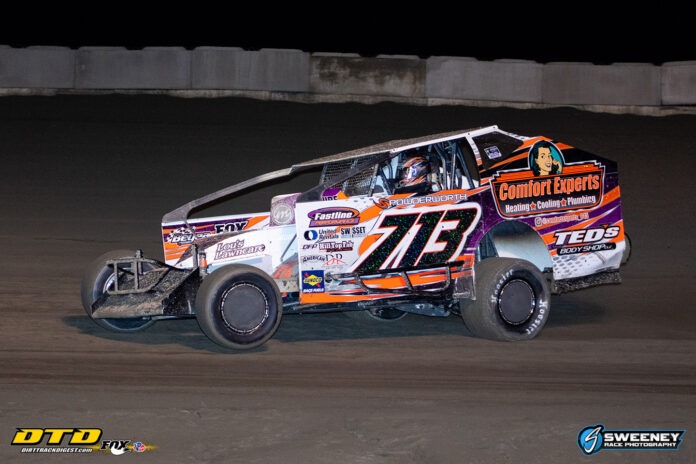 CENTER LISLE, NY – On a sunny and warm 4th of July, Thunder Mountain Speedway celebrated America’s birthday with the running of the Randy Decker Shootout for the Wheeler Excavating Street Stocks. 48 cars attempted to qualify for the 50-lap feature event.

Damon Decker led as the green flew in the 50-lap Shootout feature, but just one lap was completed when Lanson Albanese spun out of third in turn one, collecting several contenders, including Steven Deinhardt, Glenn Whritenour, and Jimmy Grant. Though Albanese and Whritenour charged pack through the pack, both of their races had ended by lap 10, with Whritenour pulling off and Albanese having contact with Mike Wilbur that knocked him out of contention.

Damon Decker and Kurt Decker continued to hold the top two spots and Adam Depuy, CJ Guererri, and Dylan Cecce fought it out, but Depuy spun on lap 18. Cecce slowed to bring out a yellow on lap 24 as Jimmy Grant went pitside after charging back through the field from the lap 1 incident. As Damon and Kurt Decker battled for the lead, Deinhardt slipped past Guererri to take third before a lap 33 cuation for Doug Stack’s spin. Deinhardt’s charge was nullified when he slowed to bring out a yellow on lap 36 just after taking the second spot. That put CJ Guererri into third, but he could not catch the speedy Decker cars at the lead of the pack, as Damon bested Kurt by a car length at the finish for the $2,500 payday. Behind Guerrri, Eric Boynton came from 21st spot to four, with Mike Morse fifth.

Connor Sellars took the lead at the start of the DIRTcar 358 Modified feature, with Tom Collins Jr slotting in behind him. Collins grabbed the lead on lap 5 and started to pull away as Billy Dunn and Jordan McCreadie closed in. Dunn battled Sellars for several laps before taking second from Sellars on lap 13, with McCreadie moving past as well. Dunn tried to chase down Collins in the final laps of the race, but Collins was able to navigate traffic very well and motor home for his first DIRTcar 358 Modified win…but Dunn and McCreadie’s nights went sour when McCreadie slowed on lap 33 and pulled to the infield, and Dunn had a problem and slowed to a stop in the backstretch on the final lap. That shuffled the order at the finish with Colton Wilson, Alan Barker, Marshall Hurd, and Sellars rounding out the top five.

Two time winner Brenton Miller led the first 12 laps of the 600cc Modified feature, but was passed by young Devon Green on a restart. Green spent the rest of the race trying to fight off Miller for the lead while Ali Scutt closed in from third and made it a three way battle for the win over the final 10 laps. Green, who just turned 12, had the moxie and the skills to hang on for a one car length margin of victory over Miller and Scutt, followed by Mark Golden and Justin LaDue.


Racing action continues at Thunder Mountain this Saturday, July 10th with all the regular divisions in action. For more information, visit www.thundermtnspeedway.net .