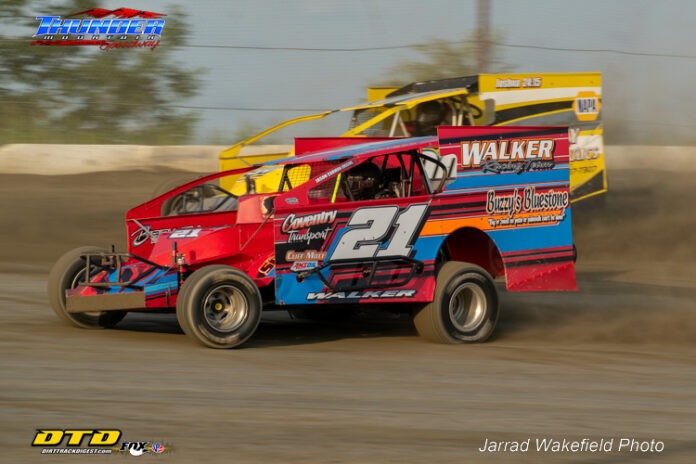 CENTER LISLE, NY – It was a night of first of 2021 wins…and first ever wins…on a beautiful Saturday night at Thunder Mountain Speedway.

Bailey Boyd charged into the lead from the front row in the 35-lap Modified feature and pulled away from the field while Darren Smith battled Shaun Walker for second. Smith got by Walker on lap 12 and the field was slowed by a yellow for a stopped Jim Zacharias on lap 15. Under that caution, Smith had a problem that sent him pitside, putting Walker back into second. Walker took the lead on the restart as two time winner Alan Barker moved into second on lap 17. Barker spent the rest of the race trying high and low to get by Walker, who held on for his first win of 2021. Barker had to settle for second with Nick Nye grabbing third from Eric Leet late in the race. Boyd held on to take his first top five of the year with a fifth.

Lance Willix took the lead from Shayne Spoonhower at the start of the DIRTcar 358 Modified feature and was never headed in the third straight caution-free affair for the division. Matt Meade made a strong run at leader Willix in the first half of the event, but Willix had a stronger car and pulled away in the final 10 laps to take his first win of the year. Meade outran Tom Collins Jr. for the second spot with Jordan McCreadie taking fourth and Colton Wilson finishing fifth.

Will Eastman was passed by Kinser Hill on lap 2 of the DIRTcar Crate Sportsman feature as Brian White and Alan Fink fought for the third spot in the early going. Hill built a big lead, but it was erased by a lap 18 yellow for Cody Jackson’s stopped car. On the restart, Hill again pulled away as Fink finally made his way past White for second with less than five laps to go. Fink battled furiously with Hill over the final two laps, but Hill held the point leader off for his first win of the year. White finished third behind Fink, with Jake Mason and Eastman completing the top five.

The 600cc Modified feature saw a multi car crash happen at the end of lap 2 that saw Tracey Oliver’s car flip over and catch fire. Fortunately, fire crews were at the ready and helped Oliver escape. When racing resumed, Ali Scutt took the race lead from Chad Mason and didn’t look back, pulling a half straightaway advantage by halfway and moving through some late race lapped traffic for her first-ever win. Jared Green battled with Brett Gray most of the race, with Green taking second at the finish, with TJ Smith and Jake Waibel rounding out the top five.


The Wheeler Excavating Street Stocks ran a caution-free 20-lap feature event with Damon Decker building on the momentum from his Randy Decker Shootout win to outrun Steven Deinhardt for his second win in 6 days at Thunder Mountain. Lanson Albanese took third, with his second car taking the fourth spot with Jerry Lobdell Jr. at the controls. Tommy Paige’s car began to falter in the final laps, but he was able to hold off Matt Roberts and Don Russell to take fifth.

It looked like Mike Morse was on his way to another win in the Pop’s Automotive Factory Stock feature as he took the lead on lap 2 of the 15-lap contest, but one lap later his car coasted to a stop in turns three and four. That put Josh Towner into the lead, but he had his hands full with former winner Jason Rhodes hot on his heels. The two battled hard over the remainder of the feature distance, with Towner holding on by two car lengths for his first 2021 win. Buck Mills Sr, Shawn Sabo, and Luke Mills.

Dylan Hartman led till lap 6 of the Gary’s U-Pull-It Budget Sprotsman feature when he spun out of the top spot, giving the lead to multi time winner Johnathan Fowlston, who held off Steve Schrader the rest of the way to take another win. Eric Winsor, Chris Clemonas, and Ray Reynolds rounded out the top five.

Evan O’Hara passed Avery Decker on a lap 2 restart and won another Junior Slingshot feature, with Decker holidng off Trevor Houghton for second, followed by Dominic Kirchberger and Liam Zacharias.

Racing continues with ‘Fan Appreciation Night’ coming up on Saturday, July 17th at Thunder Mountain. The night will feature a regular racing program plus a driver meet and greet and some special surprises and giveaways. For more information, visit www.thundermtnspeedway.net .