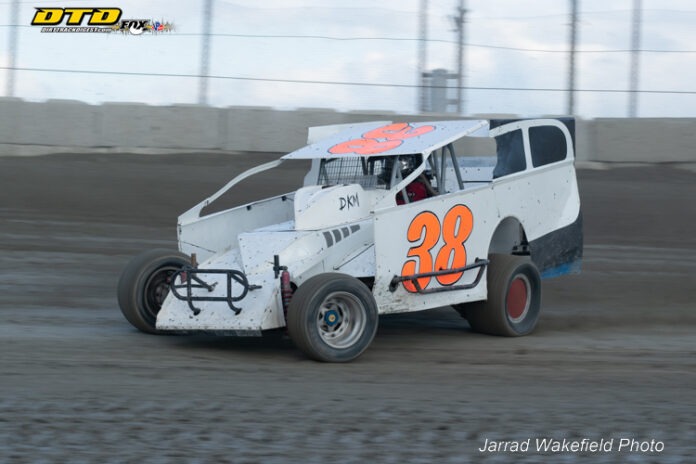 Landon Cummings and Jeff Sheely led the field to the green in the Modified feature, with Cummings pulling out a lead while a ferocious battle raged mid-pack with Jimmy Zacharias, Shaun Walker, Nick Nye, Alan Barker, and Ryan Jordan going two and three wide.  Jordan, who started at the back of the field, used the outside groove to power his way past them all and break into the top five on lap 10.  Up front, Cummings and Sheely had spaced themselves out from Darren Smith in third.  Jordan’s charge continued as he moved past Smith, but the lone yellow flew on lap 28 when leader Cummings broke and Jesse Velez spun in turn two.  That gave the lead to Sheely, who held off the challenges from Jordan for his first win at the track since the 1990’s.  Jordan, Smith, Shaun Walker, and Alan Barker rounded out the top five.

In the 30-lap DIRTcar 358 Modified feature, Shayne Spoonhower led the first half of the feature event, pulling out a bit of a lead before Lance Willix and Jordan McCreadie closed in and began battling with him.  On lap 14, McCreadie took to the outside, passing Willix for second, then passing Spoonhower one lap later to take over the top spot.  McCreadie then pulled away as Willix got by Spoonhower on lap 20.  McCreadie pulled a full straightaway lead at the finish to collect the win in the non-stop affair.  Willix and Spoonhower were followed by Colton Wilson in fourth and Tom Collins Jr in fifth.

Early leader Cody Jackson was passed on lap 4 in the DIRTcar Crate Sportsman feature by Jake Mason and the pair traded the lead again a couple of times before Mason had the lead outright.  Alan Fink, who got caught in a lap 5 yellow, had powered his way back into the top five and continued to move forward while Jackson slid back out of the top five.  Brian White managed to move into second spot in the second half of the race, but could not catch Mason, who cruised home for his first win of the year.  White and Fink settled into second and third, with Will Eastman topping Brandon Carvey for fourth after several laps of side by side racing.

Doug Windhausen led from the outside of the front row in the 20-lap 600cc Modified feature and held it till Tom Donahue blasted past on lap 8 to take the top spot.  Windhausen had a bobble with five to go and lost the second spot to Tyler Smith, but Donahue was too far out in front and cruised home for the win.  Smith held off last lap challenges from Windhausen for third, while Justin LaDue spun on the final corner and fell out of fourth spot, bumping Brenton Miller to fourth and Jake Weibel to fifth.

The 20-lap Wheeler Excavating Street Stock feature saw early leader Don Russell have an issue on lap 8 and drop out, leaving Shane Wolff Jr to battle with Damon Decker and Steven Deinhardt for the race win. Wolff Jr pulled away to take the win, with Damon Decker five car lengths back in second at the checkered flag.  Deinhardt, Mike Wilbur, and Rich Green completed the top five.

In the Pop’s Automotive Factory Stock feature, Buck Mills Sr dueled with Jason Rhodes for the race lead and Mills was able to hold a gap on Rhodes over the final few laps to take the win.  Rhodes held off Mike Morse for second, followed by Shawn Sabo and Jason Beebe.
Johnahan Fowlston put in a flawless performance for another commanding win the the Gary’s U-Pull-It Budget Sportsman feature.

Josh Landers took the lead with a three wide move at the start of the Junior Slingshot feature and went the distance to take the win.  Liam Zacharias and Avery Decker followed Landers across the line.