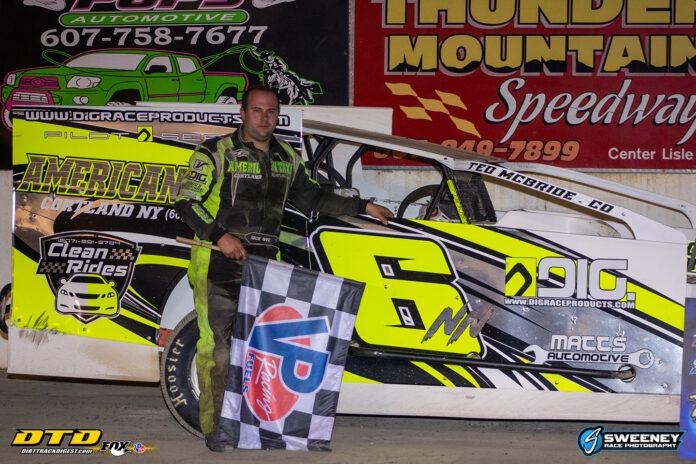 CENTER LISLE, NY…..The next to last point race of the 2021 season at Thunder Mountain Speedway was full of excitement and produced a first time winner for the season in the DIRTcar 358 Modified division, while one driver joined the select group of repeat winners in the Modified category.

Nick Nye took the lead to begin the 35-lap Modified feature with Jim Zacharias and Eric Leet battling with him almost to the halfway point, when the first caution flew for a two car tangle in turn two. After a couple of attempts to restart, racing resumed as Alan Barker shot past Leet to take third. Zacharias kept close to Nye and as they closed in on the Chris Jordan car on lap 31, Jordan had an issue, got tagged by Nye, and nosed into the frontstretch wall. Ryan Jordan could not avoid contact and slid into Chris’s car, with both sustaining heavy damage. Nye was able to again pull a couple of car lengths on the restart and held on for another win in the Modified division, followed by Zacharias, Barker, Leet, and Rusty Smith.

There was a first time winner of the season in the DIRTcar 358 Modified feature, as Glenn Forward took the Rushlow Racing entry to the lead two laps in and held on through the rest of the 30-lap distance for the win. Jordan McCreadie came from deeper in the field to move past Tom Collins Jr for second, but could not catch Forward at the finish. Collins Jr was third, followed by Shayne Spoonhower and Lance Willix.

The DIRTcar Crate Sportsman had a wild race with Jamie Kamrowski holding the early lead and some incredible three and four wide battles taking place behind him. On a lap 6 restart, Alan Fink finally broke through to take the top spot and from there went on to take his second win in a row. Brandon Carvey came roaring back through the field after a lap 2 spin to grab second, with Hunter Lapp in third. Mike Austin and Will Shields were fourth and fifth.

In the 600cc Modified feature, the first half of the race went clean and green with Justin LaDue and Jake Weibel pulling out run one two while Cameron Searles held third. A lap 10 yellow and restart wound up being a distaster for Searles, who spun out of the third spot to bring out the final yellow of the race. In the second half, while point leader Doug Windhausen was fighting in the back half of the top ten with point runnerup Brenton Miller, it appeared that LaDue was going to cruise to the win. However, one small issue getting around a lapped car on lap 18 was enough to let Weibel charge past and take the win over Ladue, with Bumps Scutt, Ali Scutt, and Tyler Smith as the rest of the top five.

Steven Deinhardt put on a dominant performance in the Wheeler Excavating Street Stock feature, going wire to wire to take the win and add to his point lead. Shane Wolff Jr and Damon Decker had a great battle for second late in the race, trading the spot back and forth in the final two laps, with Decker coming out with the runnerup spot. Wolff Jr, Jerry Lobdell Jr, and Mike Wilbur finished behind the top two.

The Pop’s Automotive Factory Stock race looked like it was well in the control of Jason Rhodes, who was holding off the duo of Mike Morse and Buck Mills Sr until one mistake with a few laps to go allowed Morse to charge past to take another victory. Rhodes had to settle for second with Mills Sr, Shane Moshier, and Shawn Sabo rounding out the top five.
Ray Reynolds held on through several restarts to take his first ever win in the Gary’s U-Pull-It Budget Sportsman over Chris Clemons, Johnathan Fowlston, Eric Winsor, and Ethan Decker.

Evan O’ Hara passed Dominic Kirchberger on the opening lap of the Junior Slingshot feature and went on to win over LIam Zacharias. Kirchberger took third, followed by Anthony Mancini and Avery Decker.