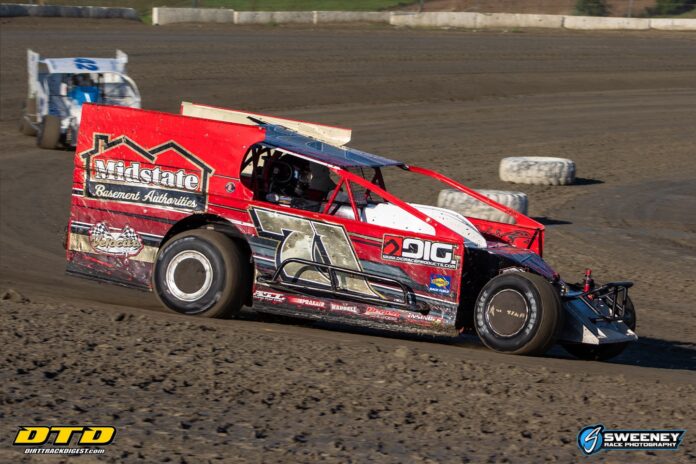 CENTER LISLE, NY – Jimmy Zacharias took the biggest win of his Modified career, taking the lead just prior to halfway in the 51-lap Wade Decker Memorial at Thunder Mountain Speedway and dominating the remaining distance for the $5,100-plus victory.

Darren Smith led the opening ten laps of the feature event before a hard-charging Eric Leet slipped by on a lap 10 restart. On a lap 15 restart, Zacharias got under Smith to take second, knocking Smith back to third. From there, the battle was on for the top spot, with Zacharias hounding Leet for the lead.

On a lap 21 restart, Leet chose the bottom, putting Zacharias up top. The pair spent a handful of laps door-to-door, with Zacharias nosing out front each time by the scoring loop. Eventually, Zacharias cleared Leet, switched to the bottom, and drove off into the sunset en route to the biggest Modified victory of his relatively short dirt career. Leet came home in second, followed by Alan Barker, Smith, and Ryan Jordan.

“I knew I had a car to win this in the dash race earlier,” Zacharias said. “I put it on the bottom and drove away from everyone there. We made minimal changes after the dash, other than a right rear shock because I hit the wall on the last lap and broke it. Other than that, it was gas and go because we knew we were good.”

Zacharias started seventh on the grid, picking his way past cars. Ironically, the car Zacharias passed for the win, Leet, started behind Zacharias in 10th.

“The double file restarts helped us a ton tonight,” noted Zacharias. “I feel like I had the right lane every restart, and I could pick off a car or two every early yellow. The restart where I got the lead, Eric (Leet) switched from the top to the bottom after he saw me there, he knows I like the bottom and he likes the top. But, I was on the top every restart before that and it worked to my favor, and it did there as well and we got the lead.”

The Wheeler Excavating Street Stock portion of the Wade Decker Memorial was led from the green by Kurt Decker, but outside pole sitter Steven Deinhardt moved past him on lap 8 to take the top spot as Glenn Whritenour moved into third.  Whritenour moved past Kurt Decker into second just before a lap 13 caution, then took the lead from Deinhardt on a restart.  Shane Wolff Jr was also on the move, grabbing second just after the halfway point, but he dropped out on lap 20 with a mechanical issue.  Whitenour pulled away on the last restart and cruised home for his second win in a Wade Decker Memorial event, with Kurt Decker third.  Mike Wilbur and Jerry Lobdell Jr fought hard for fourth and fifth in the final few laps, with coming away with the fourth spot by mere inches.

In the DIRTcar Crate Sportsman feature, Austin Germinio and Jordan Millard traded the lead early as Tom Collins Jr battled with Mike Austin.  Collins was able to get past Germinio and set his sights on Millard, taking the lead on a lap 13 restart.  Mike Austin was also able to move past Germinio and Millard into second at the lap 19 mark and put pressure on Collins but soon had to deal with Alan Fink, who had moved from 19th starting spot to third.  At the finish, Collins won by several car lengths over Austin, with Fink right behind him, and Germinio held off Hunter Lapp for fourth.
In the 600cc Modified feature, Devon Green held off repeated challenges from Jaek Waibel over the 25-lap distance and brought home his second win of the season.  Ali Scutt was able to move up froma mid pack starting spot to take third, followed by Justin LaDue and Brett Gray.

The final event of the 2021 Thunder Mountain Speedway season will be ‘The Unruly Race’ on Sunday, September 12th, which will also feature the CRSA 305 Sprint cars and the NY6A Sprint Tour.  For more information, visit www.thundermtnspeedway.net .