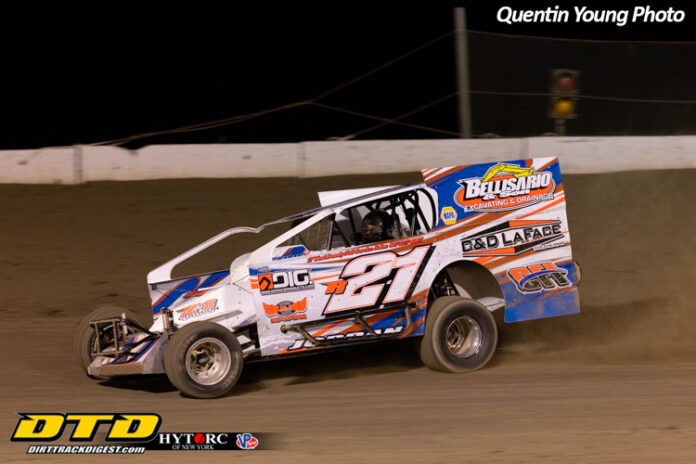 CENTER LISLE, NY – Ryan Jordan and Lance Willix scored the Modified division wins at Thunder Mountain Speedway, with Jordan winning the Open Modified event and Willix the DIRTcar 358-Modifieds. Jordan charged from deep and fended off a late run by Alan Barker in the sail-paneled Open Modifieds, while Willix was the man to chase for the duration of the Small Blocks.

Bailey Boyd was the early leader in the 35-lap Open Modified main, on a Saturday night cruise during the first run. Using the first restart of the night on lap eight, Jordan picked off some cars, then driving to second a lap later after starting 13th. Another yellow flew shortly after, and on lap 11, Jordan got by Boyd for the lead.

Barker found himself in third, working over Boyd for second. Just prior to halfway, Barker grabbed the position, but had some ground to make up to catch Jordan. Unfortunately, Boyd’s motor expired and he slowed for a caution, but it was the caution Barker needed. Following the yellow, Barker went to the bottom of the track, while Jordan went to the top.

Barker and Jordan ran door-to-door for the lead, but ultimately, Jordan was able to keep control of his spot. After clearing Barker, Jordan dropped to the bottom through turns one and two, then beginning to pull away with his newfound lane. After 35 laps, it was Jordan winning over Barker, Darren Smith, Rusty Smith, and Eric Leet.

“I joke around with my guys that I’m allergic to the bottom,” Jordan said. “I found some bite down there late, the track was great and two lanes for sure. I wasn’t sure where I wanted to be running, I made a lot of progress on the bottom early, but I always feel at home on the top. It could’ve went either way, it was a really fun race.”

After a brief battle at the start of the 30-lap 358-Modified feature, Willix secured the top spot over Rusty Smith. Smith did his best to follow in Willix’s tire tracks, but as the race neared halfway, Willix began to expand his lead. However, Smith didn’t go down without a fight, as in the closing laps, Smith closed in. Smith got within a car length in the late stages, but that was as much pressure as Willix would have. At the checkered, it was Willix winning his first of the year, with Rusty Smith, Darren Smith, Shayne Spoonhower, and Connor Sellars completing the top five.

“It’s hard to get a hold of this place, it was really top-dominant,” noted Willix. “When it gets like that, you have to make mistakes to really lose it. We did that last week and went from first to fifth, but no mistakes this week and the stars aligned. We did some different things and started to get tight around lap 25 and thought I was going to lose it, but we muscled it around and got the win.”