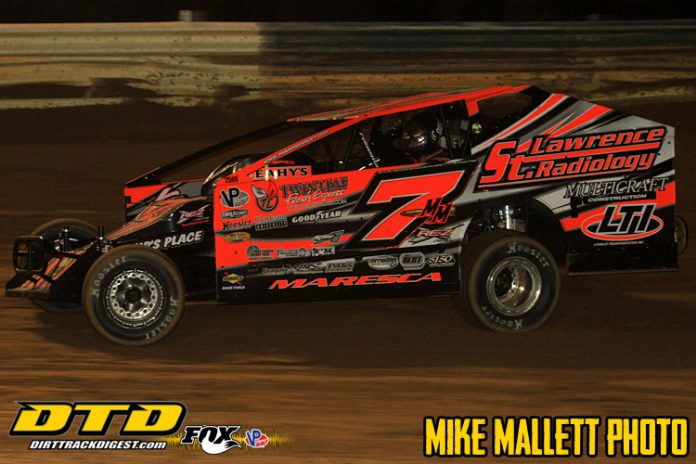 FRANKLIN, PA — Mike Maresca picked up where he left off two weeks ago, scoring the win in the Hoosier Tire Big Block Modified race at Tri-City Raceway Park. His prior victory came against the ULMS Late Models just two weeks ago. The former New Yorker now is calling Bristolvillle, OH home, while he learns the ropes from his good friend, Russell King. “I was sleeping on an air mattress at Russ’ house,” Maresca said, “but, after that first win (with the Late Model), he got me a bed.”

For Maresca, the day started with a planned trip to Eriez Speedway to race his potent Super Late Model again. But, a cancellation caused a shift in approach. “We were going to go to Eriez this morning and they canceled and we said why not come back to Tri-City, we had such a good time the last time we were here.” The decision almost had disastrous consequences, though, as Maresca narrowly avoided a major wreck early in the Big Block feature. “I got in there (turn four) and hit that hole wrong, and it about spun me around, and I hit the brake and that about looped me into that ute tire, so, somehow, I didn’t get hit and those guys did a great job to avoid hitting me.” Maresca did have another incident later in the contest, though, as he made some contact with Dr. Brad Rapp as they were fighting for the second spot.”When the track is that fast, you know, sometimes you gotta race people a little harder than you want to race them. I got side by side with him and I drove in there deep to try to seal the deal and I don’t know if we hit or what.” Maresca was apologetic, though, and he noted that “it’s tough to pass here when the track is fast in these kind of cars.”

Dr. Brad Rapp and Mike Maresca paced the field for the start of the 25 lap Hoosier Tire Big Block Modified feature. Steve Barr and Tom Glenn had row two, and Chris Haines and Kevin Hoffman had row three. Maresca took an immediate lead over Rapp, but the start was called back for a jump. When the green light flashed on on again, Rapp was ready and opened up a substantial lead over Glenn, Rasey, and Maresca.

After a brief stoppage, Jim Rasey assumed command, with Glenn holding down second, then Rapp and Maresca. In just a few short laps, however, Rapp and Maresca displaced Glenn to fourth. Meanwhile, Haines ran a steady fifth.
Maresca began to press Rapp for second as the race approached the halfway mark. On lap the books, Maresca and Rapp tangled in turns three and four, with Rapp spinning. He was able to rejoin the rear of the field with fifteen down.


Rasey jumped out front again on the restart, but Maresca worked hard on the inside line. His persistence paid off five laps into the stretch run. That was when Maresca made a bold move inside the leader to take the point. Rasey was disappointed, explaining afterwards “I just gave that one away, I hit a rut, and he slipped under me.”

Maresca began to stretch out his advantage over Rasey in the closing laps. Chris Haines cruised home in third, followed by Barr and Rapp. Kevin Green, Sid Unverzagt, Jr., Glenn, Shawn Kozar, and Kevin Hoffman were the top ten finishers.

Rocky Kugel and Justin Shea brought the Ultra Graphix RUSH Modifieds to the green flag, and they took up the lead positions. Garrett Krummert and Brandon Ritchey were close in the opening laps.

On an early restart Krummert shot into second. Another restart at the halfway mark enabled him to take the lead away from Kugel as the duo raced side by side through the first and second turns. Krummert explained, “it actually helped me restarting third right before that becasue I saw what Rocky was doing entering one, so I knew if I could just get beside him going into one, I would be OK.

Krummert began to pull away after the pass, but his trip to victory lane was slowed one more time, on lap 17. Despite that temporary setback, Krummert was the winner, with a fast closing Jeremy Weaver nipping at his heels. Ritchey crossed in third, then came the early leader Kugel, and Kole Holden. Completiung the top ten were Kyle Martell, Jeff Schaffer, Jr., Brian Schaffer, Jacob Jordan, and Blaze Myers.

Jacob Eucker jumped out front and was never headed in the World of Wheels Elite Modifieds. Despite several cautions and one red flag, Eucker had a substantial margin of victory over Josh Ferry. Taking third was Eric Wilson. Completing the top five were Kyle Miller and Josh Mueller. Brian Toto, Eric Reinwald, Nate Young, Steve Haefke, and Brad Blackshear were the next five across.

The Elite Modified division saw Josh Ferry and Kyle Miller take the top honors in their respective heat races.
Mike Potosky dominated the e-Mod feature run under the banner of Precise Racing Products. The field was decimated by a number of crashes, but, fortunately, no drivers were injured in the carnage. Joe Gabrielson chased down Randy Hall for the second position late in the feature. Hunter Hulley was fourth. Justin Carlson was scored in fifth.

Joe Gabrielson was triumphant in the heat race for the e-Mods.

Tri-City Raceway Park will be back in action on June 17, with the Father’s Day Shootout. It will be the first of three vistits to the Venango County oval for the thrilling 410 Sprint Cars! Also on tap will be the Bill Emig Memorial for teh
RUSH Late Models. The Bonnell’s Rod Shop RUSH Sprints will make their debut, racing without wings. Tyhe evnet will carry a raindate of June 24, if needed. General Admission will be $15 for adults, and $5 for students. Children (ages 12 and under will be admitted for free! Pit Passes will be $35, and the Family Pass.