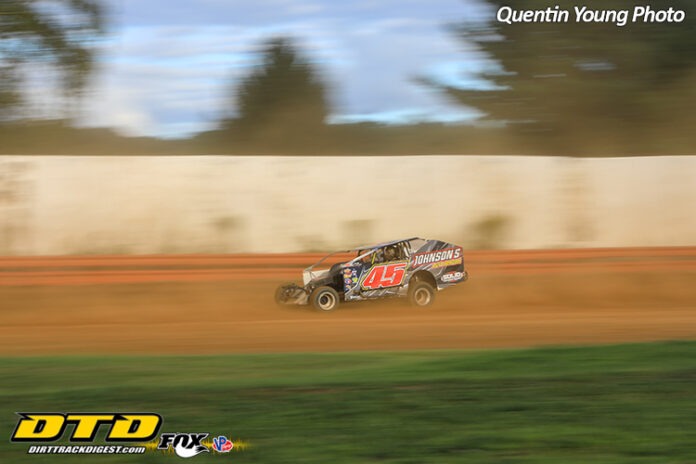 FRANKLIN, PA – Tri-City Raceway Park completed three of the four feature events on opening night before the rains came stopping the finale with just two laps in the books. So, the program this Sunday, April 25, will include the balance of the race for the 4 Your Car Connection Mini Stock class. Then, the racers will present a full, four-division Sunday Thunder card. Pit gates will open at 2 p.m. and the front gates will open at 4 p.m. Racing will begin at 6 p.m. at the track located at 3430 State Route 417, in Oakland Township.

Jack Sodeman, Jr., the defending track champion in the Shawgo Real Estate LLC 410 Sprint Cars, captured the checkered flag in both his heat and the feature event. Those wins staked him to an early lead in the point standings. New Yorker Matt Farnham remained within striking distance in the 25 lap feature race, and he sits second in the title chase. George Hobaugh closed the weekend on a high note, taking third less than 24 hours after he crashed his racer in Central Pennsylvania. Also getting top finishes were Brandon Matus, Carl Bowser, and Brandon Spithaler. They are expected back, along with Bob Felmlee who continues the revival of his stellar Sprint Car career after sitting out for several seasons. Darrin Gallagher, who scored a career first 410 victory at Tri-City last season, Brent Matus, Kyle Colwell, and many others will be on hand.

In the Krill Recycling LLC 358 Modifieds, Chad Brachmann likewise swept his heat and the feature. The Empire State veteran also snared the $50 Hard Charger bonus put up by Fisher & Father NAPA Auto Parts, of Cranberry and Clarion. Brachmann was the Pro Performer of the week by passing seven other drivers on his way to victory in the feature event. He fought hard with Jeremiah Shingledecker, of nearby Polk, PA. Jimmy Holden, Kevin Hoffman, and teenager Nathan McDowell had impressive top five finishes in their first outings of the season. They should all see action this weekend, along with more than a dozen other competitors.

Hometown favorite, Josh Seippel, fought off youngster Tyler Wyant to take the prize in the Hovis Auto & Truck Supply Pro Stocks. This highly competitve class is back as a weekly attraction at the Venango County oval. In addition, fans will see William Hurrelbrink, Michael Miller, Doug Iorio II, Patrick Fielding and many others racing wheel to wheel.

Nearly two dozen 4 Your Car Connection Mini Stocks signed in last week and all are expected back at the track. Their heat races were fast and furious, but the feature race was slowed, then halted, by the wet conditions that closed out the entertaining night of racing. So the last ten laps of the feature will be spun off before the regular racing begins.

Despite the extra action, the regular ticket pricing will apply. Just $15 will allow adults (ages 16 and up) to enter the facility. Seniors (ages 62 and up) will be admitted for $13. Students (ages 11-16) will enter for just a $10 bill. Children (ages 10 and under) will be free of charge. Or, take advantage of a Family Pass for $45, as that is good for two adults and two students. Pit Passes will be $30 for fans and participants of all ages. And, remember that parking is free and plentiful at Tri-City Raceway Park.

Mark your racing calendars for Sunday, May 2, when the All Stars Circuit of Champions will be in town to challenge the Shawgo Real Estate LLC Sprint Cars. Also in action will be the RUSH Sprint cars, which will provide lots of thrills as they race without the big wings customarily seen atop the open wheelers.

Additional information can be obtained by calling the track office, at 724-967-4601, by emailing tricityracewaypark2020@gmail.com, or by checking the website at www.Tri-CityRacewayPark.com.