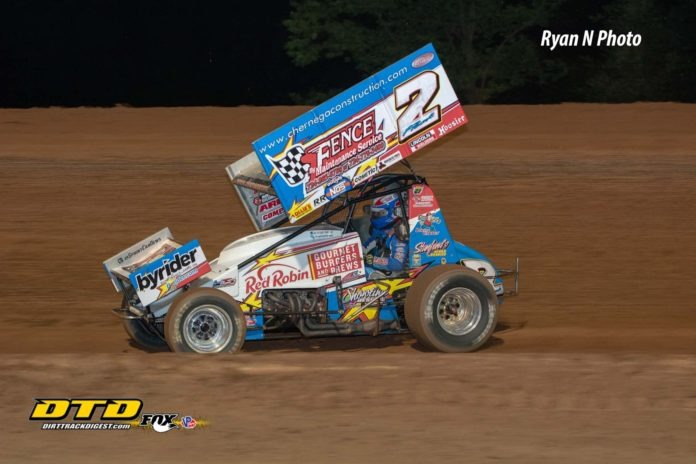 “This is great,” said a happy Kevin Hoffman after getting the much awaited win. “I am so happy for my family,” he added. Hoffman’s late brother, Jeff, was a force to be reckoned with at the track closest to the homestead. Hoffman’s father and daughter got to see the win. “I just wish my mother and wife were here to see this. They stayed home because it was too cold.”

Nick Joy and Kevin Hoffman brought the 358 Modifieds to the green flag. Defending track champion, Kyle Fink, and
Jimmy Holden were matched up in the second row. Newcomer Kyle Inman and Max Smoker were in the third row. Eric Beggs and Jeremiah Shingledecker were in row four. Nathan McDowell and Sid Unverzagt, Jr., occupied row five.

Hoffman sailed into turn one ahead of Nick Joy and then dropped to the inside line. Holden nestled into third, followed by Fink, Inman, Smoker and Beggs. While Hoffman was pulling away from Joy, Holden stopped inside turn one with a flat left front tire arising from some contact with Joy on the opening lap.

When racing resumed, Hoffman continued his lead over Joy, Fink, Inman, and Shingledecker. Joy slid out of the groove and lost two positions. Fink then began the chase of Hoffman, with Inman into third and Shingledecker up to fourth. Beggs spun out of contention for the top five just after taking the crossed flags marking the midpoint of the race.

That put Fink on Hoffman’s bumper for the restart. Fink tried to duck under Hoffman coming off turn two, but there was not enough room. He jammed on the brakes and skid up the surface, losing several spots in the process. That gave Hoffman some extra breathing room.

Hoffman polished off the final ten laps, with Inman holding off Shingledecker to get the runner-up position. Fink recovered for fourth with Joy heading north with a fifth place paycheck. Unverzagt shook off some bad luck to get sixth, followed by seventeen-year-old Nathan McDowell. Veteran Kevin Green was seventh in his first run of the new year. Dillon Barr and Tyler Clark were ninth and tenth.

Joy and Holden were the heat winners. There was no B Main.

In the Shawgo Real Estate LLC 410 Sprint Cars, A.J. Flick and George Hobaugh led the way. In the second row, it was Dan Shetler paired up with Greg Wilson, in from Ohio to tune up for the All Stars invasion next week. Carl Bowser and Bob Felmlee started in row three, with Brandon Spithaler and last week’s winner, Jack Sodeman, Jr., in the fourth row. Ninth and tenth in the starting line-up were Kyle Colwell and Ricky Peterson.

Flick blasted out to the early lead with Hobaugh, Shetler, WIlson, Felmlee, and Bowser next in line. Flick was impressive, opening up a substantial lead over Hobaugh as the race progressed. Just before the halfway mark, though, Brandon Spithaler nailed the water barrels on the outside of the second turn. He was unhurt, but the leaking water caused a red flag situation for some track maintenance.

On the restart, Flick zoomed out ahead of Hobaugh again. But Sodeman rode the rim to take the third position.
Flick continued to pull away from Hobaugh, who also began to separate himself from Sodeman. Wilson cruised along in fourth with Shetler in his wake.

Flick swept under the checkered flag to get his first win of the 2021 season. He was more that three and a half seconds ahead of Hobaugh at the finish. Sodeman, Wilson, and Shetler followed. Brandon Matus perked up after the restart, moving into sixth by the finish. Felmlee, Peterson, Colwell, and Brent Matus completed the top ten.

Sodeman and Flick took the preliminaries. In the heat races, Leyton Wagner crashed in turn one, but he was not hurt. There was no B Main.

The heat winners were Seippel and Wyant. There was no B Main.

The 4 Your Car Connection Mini Stocks started the night with the balance of their twelve lap feature event. The racers completed just two laps before the track became too wet on opening night. Justin Bailey surged into the lead at the drop of the green flag and led the remaining ten laps. However, Dalton Speer came on strong in the second half of the race to chase him home. D.J. Mcrae finished third, followed by Pat Hanlon, Jr., Evan Sobieski, James Tasker, Chad Greeley, Gregory Kiehl, Brayden Seippel, and James Buchanan.

In the regular feature for the 4 Your Car Connection Mini Stocks, Dalton Speer came off turn four with a full head of steam to pass Pat Hanlon, Jr. Officials had to check where the transponders were mounted on the first two cars, as the margin of victory was a scant .003 seconds. Both transponders were in their proper locations and Speer was declared the winner in what was most likely the closest race in the history of the speedway. Justin Bailey was third, followed by Gregory Kiehl and D.J. Mcrae. Evan Sobieski, James Tasker, Chad Greeley. Kevin Wice, and Brayden Seippel were the next five to cross.

Heat winners were Kiehl and Hanlon, Jr. There was no B Main.

Mark your racing calendars for the big show next week. The All Stars Circuit of Champions Sprint Cars roll into the Venango County oval to finish up a three-race mini series in Western Pennsylvania and Eastern Ohio. That race will be presented courtesy of Krill Recycling LLC. There will ne RUSH Sprint Cars providing support thanks to Gary Glass Automotive. Remember that there will be no racing at Tri-City Raceway Park on Mothers Day, but everybody will be back on May 16 for a Sunday Thunder program and Military Night,