FRANKLIN, PA – As the mid-summer break comes to an end, competitors at Tri-City Raceway Park are anxiously awaiting the resumption of Sunday Thunder programming at the half-mile dirt track, which is one of the fastest and most exciting in the Western Pennsylvania area.

Why are the racers so intensely preparing for action? Not since the opening event of the 2021 season has the battle for points championships been so close! In three of the four divisions, just a handful of points–or less–separate the top racers. And each of these classes will be in action this Sunday, July 18.

Indeed, in one of the classes, the Hovis Auto & Truck Supply Pro Stocks, there is a new leader in the standings. William Hurrelbrink has been surpassed by Curtis J. Bish. Bish’s win in the last race propelled him to a four point advantage. But, if either of these racers take a look over their shoulders, they will see two other hungry challengers waiting in the wings. One of them is teenager Tyler Wyant, who is third in the rankings, just nine points out of first, and five points removed from second. And Josh Seippel is only eleven out of the lead, seven out of second, and two points out of third. These four drivers will be fighting hard for every position whenever their cars are on the track. One or two passes could shake up the standings, for sure!

But these four racers will also compete against a dozen or more Pro Stock racers, including Bobby Whitling, who now has two victories on the season. Veterans like Andy Buckley, Jason Johns, Rod Laskey, and Patrick Fielding will challenge for the win!

A number of the region’s best Pro Stock drivers are expected as this will be one of the last opportunities for racers unfamiliar with Tri-City Raceway Park to shake down the cars before the highly anticipated Penn Ohio Pro Stock Championship race coming up on July 25.

Dalton Speer has seen his lead shrink to just five points in the 4 Your Car Connection Mini Stock ranks. Justin Bailey snapped Speer’s three-race winning streak and holds down the second position. Speer had to start last in the most recent contest, and he worked his way into the top five before a mechanical failure knocked him out of the race. Speer wants to rebound and add to his margin, but nearly two dozen other racers will be ready to challenge him and Bailey for the win!

But Jack Sodeman, Jr. may be the most vulnerable of all of the point leaders at Tri-City Raceway Park. Only one point separates him from Brandon Matus. Matus is hotter than a firecracker. He has a win and a second in his last two races at Tri-City, while Sodeman is regrouping after two crashes in his Shawgo Real Estate LLC 410 Sprint Car.

Bob Felmlee and Brent Matus are also in a dogfight for the third position. There is a seven point spread between them.

Come out and cheer them on, along with a dozen or so other racers as they want to win the Sprint Spectacular. The top Shawgo Real Estate LLC pilot will take home an extra $500 this week!

The RUSH Sprints will be in action on July 18 as well. Can Gale Ruth, Jr. get his second win of the season? How about Chad Ruhlman, the winner of the first RUSH Sprint race this season? Gary Glass Automotive and Washington House will present the action in this highly competitive division.

And, last but not least, the future of dirt track racing will be on display Sunday at Tri-City. The Junior Sprints will compete on the big track. Most of the drivers in this class are just getting started in the sport and they would like nothing more than chalking up a win at Tri-City.

Regular ticket pricing will apply even though there will be five classes in competition. Adults (ages 16 to 62) can experience all of the action for just $15. Seniors (ages 62 and up) will receive a two dollar discount. Student (ages ten through 16) admission will be $10. Children (ten and under) are free. The Family Pass will admit two adults of any age and two students for just $45. The Pit Passes will be $30.

If you cannot make it to Tri-City Raceway Park for the Sprint Spectacular, plan to come out on July 25 for the Pro Stock championship race that will pit the Hovis Auto & Truck Supply regulars against the travelers racing under the Penn Ohio Pro Stock Championship banner. The Shawgo Real Estate LLC 410 Sprints, the Krill Recycling 358 Modifieds, and the 4 Your Car Connection Mini Stocks will also be on the card. 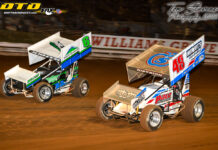 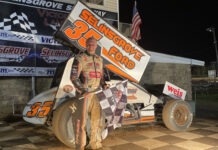