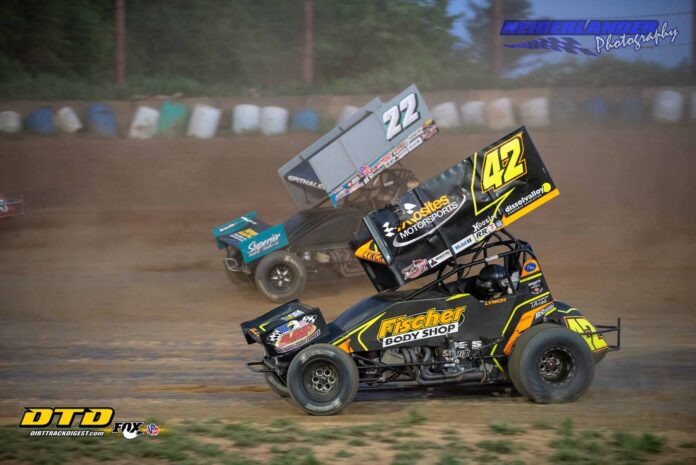 FRANKLIN, PA – Like a heavyweight title match that has come down to the final round, the regular season championships at Tri-City Raceway Park have come down to the last night of racing. Three of the four divisions are still in doubt and the action will be intense. You will want to be there to see who comes out on top when the checkered flags fall.

Fittingly, the closest match will be in the Shawgo Real Estate LLC 410 Sprint Cars. Jack Sodeman, Jr., the defending champ from North Jackson, OH, started out the season strong. But, he saw his points lead evaporate when he had a rough stretch in the middle of the season. In fact, his rival, Brandon Matus of Wampum, PA, took the lead for one week. However, Sodeman has outpaced the younger Matus in recent weeks and he has regained the lead. Just eight points will separate them when the final night of racing starts. Sodeman and Matus can earn points in the heat races and the feature, so every time one of them hits the track the pressure will be on.

Most other positions through the top ten in the Shawgo Real Estate LLC 410 Sprint rankings are fairly stable and not much change is anticipated there. However, those racers will be seeking the satisfaction and hefty payoff that a win will provide. So, expect to see the likes of Bob Felmlee, Brent Matus, Darin Gallagher, Brandon Spithaler, Logan McCandless, and Leyton Wagner giving it their all. Kyle Colwell, who has missed several weeks of action, may fall from the top ten if Carl Bowser, Bob McMillin, or Ken Rossey have strong showings.

In the Hovis Auto & Truck Supply Pro Stocks, it will be experience versus youth in the championship battle. But, this time, it will be three drivers contending for the top spot! Veteran Curtis J. Bish leads teenager Tyler Wyant by eight points as well. And close behind them is veteran Josh Seippel who is only seventeen points out of first place. All three of these drivers have scored wins this season and it just may take another victory for one of them to seal the deal.

But there will be plenty of other racers who will contend for the Hovis Auto & Truck Supply Pro Stock win. Darr Diegelman has been consistent. William Hurrelbrink was at the top of the standings earlier in the season before some bad luck caused him to drop back. Patrick Fielding will be looking for his first win of the season, as will Curt Bish, Doug Iorio, II, and Josh Blum. Bobby Whitling has a couple of wins to his credit, and could move ahead with another good showing, but his early season absences hampered his overall performance.

Three drivers may also have a shot at the championship in the 4 Your Car Connection Mini Stocks. Justin Bailey has control, with a twenty-four point margin over Dalton Speer. It seems like it was yesterday that the two were fighting tooth and nail for the top spot, but Speer lost ground when he started to have mechanical problems with his car. Chad Greeley, with two recent wins, is closing in from the third position. He is thirty-five points behind the leader and he could move up if he scores another win and if Bailey and Speer have misfortunes.

The 4 Your Car Connection Mini Stocks have been one of the strongest classes at the track all season, so don’t be surprised if there are two dozen or more competitors on Sunday evening.

The Krill Recycling LLC 358 Modified class has been dominated of late by Jeremiah Shingledecker. He won four in a row, and five overall, to build up a sixty-eight point advantage over Jimmy Holden. Shingledecker will be looking to rebound this week after having his winning streak ended. Many others will try to score the prestigious win, including Sid Unverzagt, Jr., who just had his best Tri-City finish ever, a second to New York invader Erick Rudolph. Kevin Hoffman, Kyle Fink, Lonnie Riggs, Max Smoker, Ryan Riffe, and many more local talents will be there to take on other New Yorkers like Nick Joy and Kyle Inman.

There will be no oval track action for the remainder of August. However, there will be a Renegade Monster Truck Show on Saturday, yes, Saturday, August 28. Racing will resume on Labor Day weekend with a night of practice followed by two nights of competition. That will be September 3-5. There will also be a bonfire and music after the races on Sunday night.