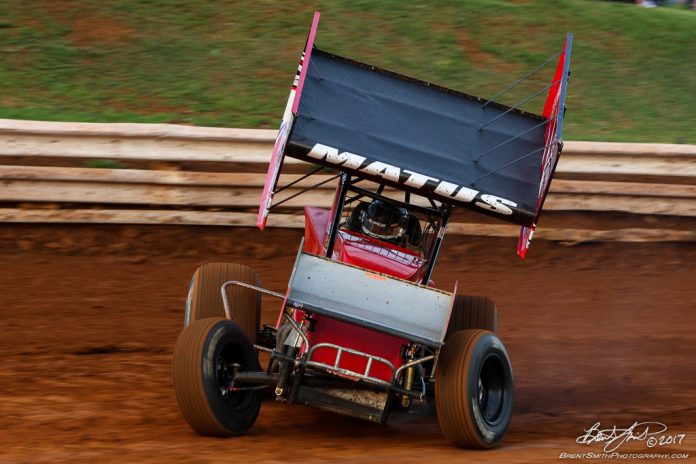 FRANKLIN, PA – It was a last lap pass that Brandon Matus will remember forever. He rocketed past race leader Carl Bowser on the backstretch to get the Shawgo Real Estate LLC 410 Sprint Car win at Tri-City Raceway Park and to gain four additional points, enough to change a two point deficit to a two point advantage in the championship tilt with the defending title holder, Jack Sodeman, Jr.

In other action, Jeremiah Shingledecker clinched the Krill Recycling LLC 358 Modified championship by starting the feature event, but then he led every lap to get his sixth win of the season. Bobby Whitling won his 100th career feature by sailing under the checkered flag thrown by his father in the Hovis Auto & Truck Supply Pro Stocks. Dalton Speer, who dominated the early season action before hitting a rough patch, came back to win the final point race in the 4 Your Car Connection Mini Stocks. Nonetheless, Curtis J. Bish and Justin Bailey secured their point championships in the Pro Stocks and Mini Stocks, respectively.
Bowser and Brandon Matus paced the field in the Shawgo Real Estate LLC 410 Sprints. Brent Matus and Logan McCandless drew the second row, with Clay Riney and Sodeman lined up in the third. Row four had Bob Felmlee and Brandon Spithaler, and the fifth belonged to Ken Rossey, Jr. and Mike Lutz, Jr. Rod Jones and his daughter, Vivian, made up row six.

Bowser took the lead at the start of the twenty-five lapper that would decide the track championship. Brandon Matus, who shaved two points from Sodeman’s eight point advantage through heat race action, slid into second. The race was slowed after just two laps due to debris.

Racing resumed again with Bowser continuing to lead Matus. But Sodeman did not enter the top five until lap five.

A spin by Roman Jones brought out the second caution. On the ensuing restart, Sodeman climbed to fourth. Had the race ended that way, there would have been a tie for the championship. But things were not finished yet.

At lap ten, the final caution was displayed, setting up a fifteen lap run to the checkers.
Bowser took the point, followed by Brandon Matus, but Sodeman was now up to third after passing Felmlee. That broke the potential tie and would have given Sodeman the nod with two points to spare.

While Brandon Matus hounded Bowser, Clay Riney and Bob Felmlee were swapping the fourth place behind Sodeman. Brandon Matus searched in vain, but could not find a way to get by Bowser, who won earlier in the weekend at another area speedway.

With the white flag waving and traffic looming ahead, Brandon Matus took the high line off turn two and moved past Bowser on the long back chute. The pass for position was critical, not only for the outcome of the race, but also the point championship.

The Wheelman got the win and his title by .904 seconds. It was his second victory of the season and third overall at the track. He was followed by Bowser and Sodeman. Felmlee held off Riney for fourth. Spithaler, McCandless, Gallagher, Rod Jones, and Bryan Salisbury rounded out the top ten.

A pair of heat races were presented by Donovan & Bauer Auto Group for the Shawgo Real Estate LLC 410 Sprint Cars. Taking the wins were Felmlee and Brandon Matus. There was no B Main.

After spending two weeks at the rear of the starting line-ups because of his string of successes, Jeremiah Shingledecker drew the pole for the twenty lap Krill Recycling LLC 358 Modified go. He had D.J. Schrader on his right. Behind them were Jimmy Holden and Lonnie Riggs. Nick Joy and Sid Unverzagt, Jr. were in the third row. Max Smoker and Tom Holden followed. Ryan Riffe and Kevin Green were in row five. Ryan Riffe started shotgun on the field.

The championship was determined when the green flag was shown to the field and, for all intents and purposes, so was the feature event. Shingledecker took the lead and only one caution, on lap two, would slow his progress.

He had smooth sailing over the remaining eighteen laps, winning by 3.412 seconds. Jimmy Holden took over second on lap six and held it the rest of the way. Riggs took third, matching his best run of the season. Joy was fourth, a season’s best for him. Unverzagt crossed in fifth, giving him top fives in consecutive weeks.
Schrader, Hoffman, Smoker, Riffe, and Green completed the top ten.

The Krill Recycling LLC 358 Modifieds needed two Donovan & Bauer Auto Group heats to set the starting line-up. Shingledecker and Joy scored the victories. There was no B Main.

Tim Bish grabbed the pole for the Hovis Auto & Truck Supply Pro Stock race. Bryan Daugherty started his first feature of the season in second. Curtis J. Bish and Curt Bish were in row two, followed by Whitling and Hunter Exley. Jason Johns and Tyler Wyant were in row four. Josh Seippel was paired off with Charlie McMillen in row five, then came Patrick Fielding and Darr Diegelman. Josh Blum was on the tail of the field.

Tim Bish took control for the first six laps, but an issue for McMillen slowed the pace.

Bish led the way again upon the display of the green, but Whitling was up to the challenge. He nosed ahead just before the second caution, this time for Daugherty.

Back to green, and Whitling was holding strong in the top spot. Tim Bish was challenged by Curtis J Bish, who took over second on lap twelve.

As Whitling took the checkered flag, there was a special family moment. His father had joined Todd Beichner atop the flag stand and he was allowed to wave it in celebration of his son’s landmark achievement. The win was Whitling’s one hundredth overall, and fifty-fifth at the track, with all but one of those coming in the Pro Stock division.

The 4 Your Car Connection Mini Stocks had Evan Sobieski and Daltin Speer on the fron row, Kelly Clark and Bodey McClintock in row two. The third row had D.J. Macrae and Justin Bailey, while the fourth belonged to Levi Maskal and Chad Greeley. Diezel Marvin and Michael Barr were in row five. Jesse Armstrong and Jamie Tasker were in row six.

Dalton Speer completed the dozen laps without interruption. It was his sixth win of the season, which was filled with ups and downs. He was hotter than a firecracker at the start of the season but a series of bad finishes in the middle of season dashed his championship aspirations. Although he needed only a top ten to claim the top prize, Bailey chased Speer home. Then came Greeley, Macrae, and Sobieski. Bodey McClintock, Maskal, Clark, Barr, and Tasker were the next five finishers.

The 4 Your Car Connection Mini Stocks contested two heats under the auspices of the Donovan & Baeer Auto Group. Topping them were Greeley and Dalton Speer. There was no B Main.

Remember that Tri-City Raceway Park will be dark on August 22. There will also be no racing on August 29.

The Renegade Monster Trucks will put on their awesome display on August 28, which is a Saturday.

Racing will return to Tri-City Raceway Park on Labor Day weekend. There will be a wide variety of racing, as eight divisions will be in competition. The activities will kick off with an open practice session for all classes on Friday, September 3. The Shawgo Real Estate LLC Sprint Cars will headline both September 4 and 5. The Krill Recycling LLC 358 Modifieds will be the undercard on Saturday, September 4. The BRP Modified Tour will be in for its only appearance of the season on Sunday, September 5. Five support divisions will also see action both nights. After the races on Sunday, there will be a bonfire and music.