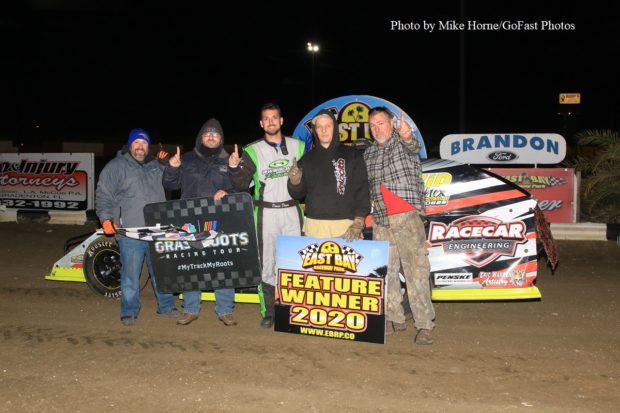 GIBSONTON, FL –  A chilly night greeted the hardy fans who attended the opening night of the 44th annual Winternationals at East Bay Raceway Park. On tap was a 25-lap main event for UMP/EBRP Modifieds and a 20-lapper for the companion Street Stocks.

A field of 45 Modifieds took to the track to qualify for a starting spot in one of the five heat events. When the final car had timed, it was Shane Burrows who stood in Victory Lane as the fastest of the group. Burrows had earlier forecast the outcome by being the fastest car in the hot lap session.

A pair of controversial B mains provided the last four spots for the feature. In the first event, contact between Clay Harris and race leader Curt Myers ended up with Myers stopped and Harris continuing. The rule dictated Myers to be sent to the rear, but he chose to withdraw from the event. Harris claimed the win with Travis Varnadore earning a feature spot.

In the second B-main, Tait Davenport pulled out to a dominant win, but the drama came from a second-place battle between Jeff Mathews and Donnie Moran. Mathews went high into the final corner and swopped down on Moran as they crossed the finish line. Moran ended up in the frontstretch wall and the damage to his car prevented him from starting the A main.

A field of 22 were able to answer the call to the green flag. Kevin Adams and Lucas Lee picked different lines with Adams going high and Lee choosing the bottom. Adams would gain the early advantage and a great run by Anthony Slusher kept him in the early conversation. Devin Dixon went to the high side as he crept into the top five and found himself gaining on Adams. A slight shift in attack worked for Dixon, who took the lead on lap 11. The caution returned three laps later. On the restart, Adams regained the lead, but Dixon was able to squeeze ahead again before another yellow on lap 21. While it looked like Adams might pull away, there was no denying Dixon. He powered out to the eventual victory to open the week.

Richie Stephens, who captured Street Stock wins in the 2019 Winternationals, got back on track by winning his heat and the 20-lap feature with a new car. David Barwick got back to his winning ways with a heat win.