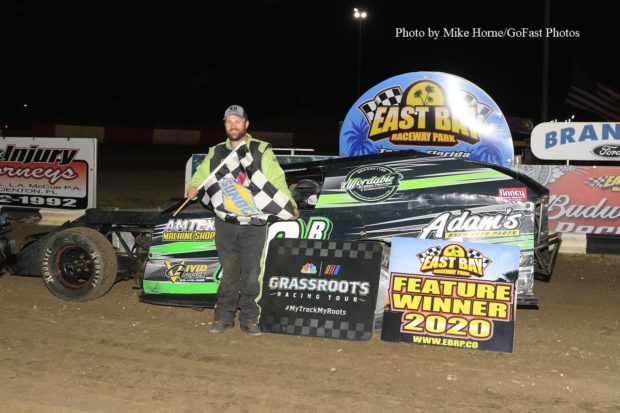 GIBSONTON, FL –  For the second night in a row, drama prevailed in the running of the Modified A Main as the outcome wasn’t decided until the last lap. On the second night of the action, the winner would take the top prize by a half car length at the checkers.

Shane Burrows went wire-to-wire in the 25-lap main, but not without challenges. The biggest challenge came from Oklahoma racer Jason Hughes, who broke from his own early race battle with fast qualifier Lucas Lee to put himself in a strong position. Hughes and Lee were battling for third behind Tuesday B feature winner Tait Davenport, but both were able to advance on lap 7. Hughes followed the line of leader Burrows in hopes of gaining ground and was able to steadily chip away.

The leaders hit lapped traffic on lap 18 with most of the cars in front of them steering clear of the lower groove. With just a lap remaining, things would get a little closer, but lapped traffic yielded, allowing the lead duo to duel it out. On the final lap, Hughes made an inside move in turn four, but just could not get the needed momentum to bypass Burrows. Shane Burrows gathered his second career Winternationals feature victory and became the second local winner in as many nights.

The initial start was called back for a Tod Neiheiser spin. The race stayed green for 10 laps until the caution flew as Roger Crouse was off the pace and could not get into the infield because of racing action around the entire track. From there, the race ran caution free.

Burrows opened his night by capturing the eight-lap heat event to start the racing program. Hughes, Lee, Davenport and Bryan Bernhardt were winners of the preliminaries. Neiheiser and Clay Harris advanced to the A main with B feature wins.

Richie Stephens made it back-to-back wins in Street Stock action, claiming the win in a 20-lap feature that was plagued with caution flags. Stephens and Nick Hebrank won heat events in the division.

Racing action continues tomorrow (Thursday, Jan. 23) with Street Stocks and Modifieds. A field of 46 Modifieds was on hand to contest tonight’s event.