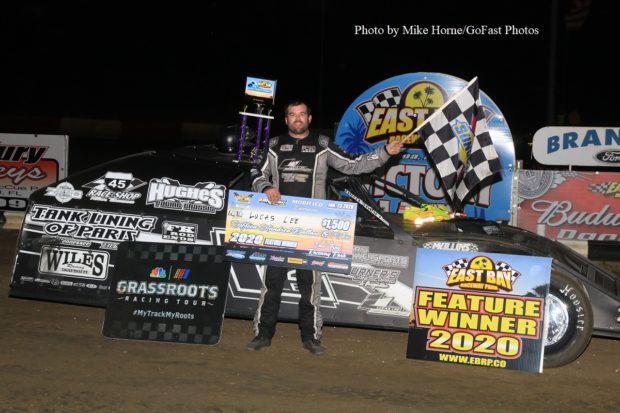 GIBSONTON, FL –  The third night of the 2020 Winternationals saw the third different feature winner in the Modified ranks. Tennessee racer Lucas Le held off all challengers in the 30-lap to record the victory.

Lee, who had won the Saturday feature in the 2019 Winternationals, became the second driver to record a fast time and follow on the next night with a feature win.

The heat race winners made up the first five spots on the starting grid with Lee on the pole, flanked by Kevin Adams with Kyle Bronson and Todd Neiheiser in the second row. Heat four winner Tait Davenport would start in fifth.

Lee grabbed the early lead with Bronson in tow. The first caution came out for a Dale Kelley spin on lap three. By this point, fast qualifier Tyler Nicely, who had started 18th in the 24-car field, had worked his way to seventh. On the restart, Bryan Bernhardt found himself forced into the barrier and eliminated from competition. A few laps later, Travis Varnadore spun while third. Collecting Shane Burrows with Davenport narrowly avoiding major damage. Davenport rocketed to second on the restart and set out to hunt down Lee.

A long green flag period ended on lap 19 when Burrows spun again in turn two. Nicely had continued his advance and now found himself directly behind Lee. On restart, the man on the move was Tuesday night feature winner Devin Dixon. The #313 picked off four cars in four laps and moved into second place with only three laps to go. The pressure was on Lee, who coolly stayed on the bottom to hold off the charges and claim the win.

Both B mains, which qualified two cars each to the A main, were decided with last lap passes. Jeff Mathews shot past Spencer Hughes for the win in B Main 1 while Jason Hughes came from deep in the field to slip past Chris Wilson.

The fourth night of Modifieds and Street Stocks promises to offer unending excitement, leading into the Saturday finale.