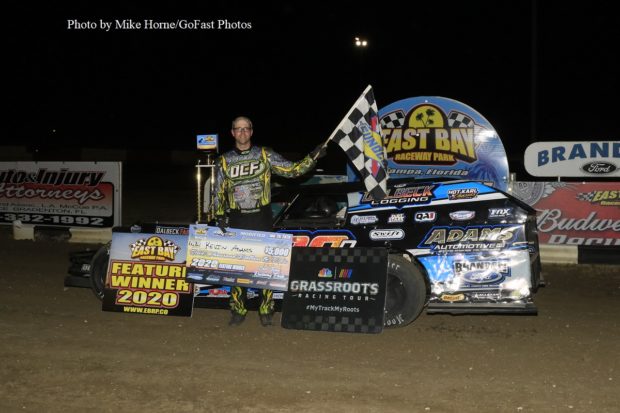 GIBSONTON, FL –  The fifth and final night of the first week of the 2020 Winternationals kept the theme of high drama to the end well in play. With longer distance features for Street Stocks and Modifieds, story lines played out to the thrill of victory and the agony of defeat.

The lineups for the Saturday night racing were set through the points accumulated through the first four nights. The top six cars in each division were automatically qualified to the night’s A main while the rest would work through heats and, in the case of the Modifieds, a pair of B features. There were 40 cars in the Modified pit area with some of the week’s earlier supporters opting for a day of extra Florida vacation or a headstart on a trip home. The Street Stocks came through with the highest car count of the week as 20 cars were in the pit area.

With the 24 qualified drivers and two provisionals offered, a field of 26 cars presented for Derek Powell’s green flag for the 75-lap Modified A main. Kevin “Buzzy” Adams took the early lead from the second row with Tait Davenport and Jason Hughes in tow. The first caution flew on lap 4 for a single car spin. The top three stayed the same until lap seven when Spencer Hughes vaulted to third. He slipped back before the caution showed up again on lap 11. It took five restarts before the race could go green for a longer stretch. Devin Dixon shot to third, bringing Kyle Bronson to fourth. Dixon was able to get to second behind Adams and begin pursuit of the top spot. Tyler Nicely used the top line to put himself in position to claim second by lap 25.

Nicely was able to get the lead on lap 26, but he would keep it for just a few laps before Dixon became the third different leader. Dixon would hold it until the mandatory re-fuel break. On the restart, Adams moved back out front as the cast of characters behind him would change nearly each lap. On lap 50, it would be Dixon back in second. He set his sights on Adams and, six laps later, he moved directly in front of Adams to block his momentum and take the lead. With 10 laps to go, Adams was poised to make a move and he did so, taking the top spot from Dixon. The Tuesday night winner Dixon was not done but fell back behind Jeff Mathews. When the yellow flag came out on lap 74, the high drama was clear. Dixon put up a gallant effort to get past the race leader, but there was no room to go and Adams flashed across the line with a win by 0.195 seconds.

“I’ve lost a lot of these types of races>’ said Adams in Victory Lane. “Tonight, there were so many changes out there. This track changed three different times in the race.”

The winner, driving for Michigan logger George Dalbeck, related how the team had changed a motor for the night and praised the crew for the decision to get it done.