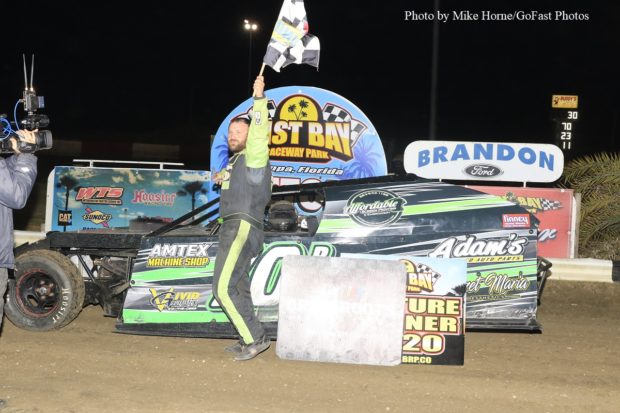 GIBSONTON, FL – Night number four of the 2020 Winternationals was a pivotal night for the racers in the Modified and Street Stocks divisions. When it was all said and done on Friday night, the top six in weekly points would be locked in with an automatic spot in the Saturday A-main.

After three nights of racing, Wednesday feature winner Shane Burrows was on the outside looking in, sitting in the seventh point position. He needed a good finish on Friday and there’s nothing better than the victory he gained in a thrilling race.

Kevin Adams took the early lead, holding a slight margin over Jason Hughes in the first two laps. The caution was displayed twice in the first five laps before the field could start to get momentum. The lap 5 incident was a multi-car pileup that left the racers idle on the track while safety workers addressed the multiple clean-up needs. When the race went green, Burrows began to make his move, vaulting to second by lap 11 and seeking the front from Adams.

The leaders encountered lapped traffic, forcing Burrows from the high line to follow the leader. As Adams approached Donnie Moran on the bottom, Burrows determined the best way to go would be back on the top. Adams had difficulty getting past Moran and that was all of the opportunity Burrows needed to grab the lead on lap 24.

Adams tried gamely to get the lead back after a couple of late race restarts with Spencer Hughes factoring in for his best run of the week. When the checkered came out, it was Burrows dashing across the line for his second feature win of the week.

The victory was enough to move Burrows solidly into the top 6 in points. Devin Dixon’s fifth place was enough to secure the top point spot. The remaining racers who graduate directly to the A-main are Adams, Burrows, Tyler Nicely, Jason Hughes and Tait Davenport.

A field of 18 Street Stocks gathered for the fourth night with the clear objective of stopping three-time feature winner Richie Stephens. Heading the assault was Thomas Pratt, a feature winner at East Bay in the 2019 season. On the initial start, Stephens wasted no time in moving to second from his third row starting spot. He was pressuring Pratt on every restart, but on lap six, Stephens spun in turn two. He was able to continue but another car spun for the return of the yellow. Since a lap was not completed, Stephens was put back in second. Pratt managed to run consistent lines and prevent Stephens from advancing, taking the checkered flag for the 20-lap win. Pratt and Tommy Hill were victorious in heat action.

Week one of the 2020 Winternationals will wrap up with the final night of racing in Modifieds and Street Stocks.