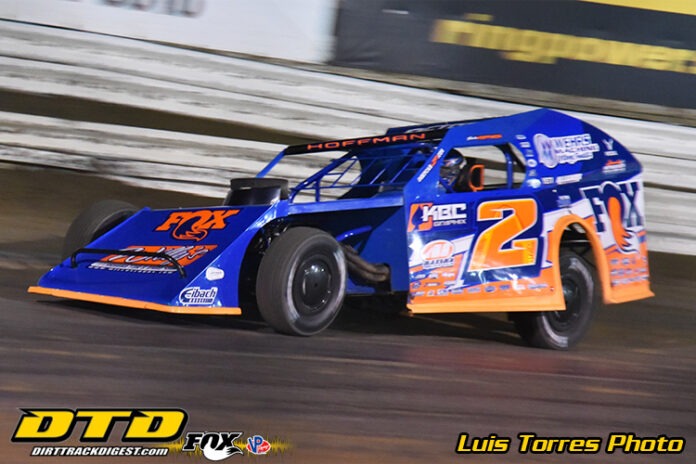 BARBERVILLE, FL – There was just no stopping the five-time and defending DIRTcar Nationals champion Tuesday night.

Nick Hoffman scribed yet another chapter in his big book of DIRTcar UMP Modified dominance at Volusia Speedway Park with his 18th Feature win in event history, making the pass on eventual runner-up Curt Spalding in the second half of the race after a restart to claim victory.

Chilly temperatures and a smooth, slick racing surface made for ideal track conditions for the two-time and defending DIRTcar UMP Modified national points champion to race on.

“Normally I suck earlier in the week here. It’s normally pretty fast and I’m just not as good in that condition. For it to be this slick already this early in the week, hats off to the track prep crew. It’s way easier on equipment and makes our week a hell of a lot easier when the track is slower,” Hoffman said.

Volusia’s track surface was just recently redone, which presented each driver with a new element to take into account as they selected tire compounds for the 20-lap Feature.

“I just went harder on tire than them guys around me, so that definitely paid off by the end of the race,” Hoffman said. “My cars just work way better on a harder tire, so it was kind of a no-brainer for me.”

Hoffman, of Mooresville, NC, put those tires to the test almost immediately, taking second from his fourth-place starting spot in just five laps. Spalding, of Watervliet, MI, had jumped to the lead from the outside pole and had a decent gap on Hoffman in the opening circuits, until Hoffman turned on the jets and closed the gap to just a car-length as they approached halfway.

A caution flag on Lap 9 reset the field gave Spalding his first test on the restart, which he solidly passed by keeping Hoffman at bay behind him, but only for a few more times around. Another yellow on Lap 13 put Hoffman right behind him once more, and Spalding knew what was coming.

Hoffman got a tremendous run to Spalding’s outside as they took the green on the restart, then blasted off again out of Turn 2 to complete the pass as they raced down the backstretch.

“I was able to roll down the hill and get the momentum on the front-straightaway, and I was actually just riding at [Spalding’s] quarter-panel, running at about quarter-throttle so that way, when he peeled-off to run the bottom, I could just gas-up and drive back by him,” Hoffman said.

Spalding was able to maintain second through the checkered flag while Hoffman cruised to the victory by almost five seconds. Despite giving up the lead in the second half, he was very pleased with his performance.

“We’re very happy,” Spalding said. “To unload with this caliber of cars and get the job done, we’re pretty happy.”

Tyler Nicely, of Owensboro, KY, crossed the line in third after a strong drive from fifth. The most recent Emil & Dale Reutimann Memorial winner found a hot rod early in the week with his new Longhorn by Loenbro chassis, as did fellow Loenbro pilot Steve Arpin, who placed sixth in his first race back in his own car at Volusia since 2008.

Polesitter David Stremme crossed the stripe in fourth after slipping back in the first half, but his Lethal Chassis cars looked strong, especially with fellow Lethal racer Spalding going runner-up.

The DIRTcar UMP Modified action continues from the 50th DIRTcar Nationals at Volusia Speedway Park Wednesday night with another 20-lap, $1,000-to-win program in race #2 of 7 for the division. Catch all the action live on DIRTVision!