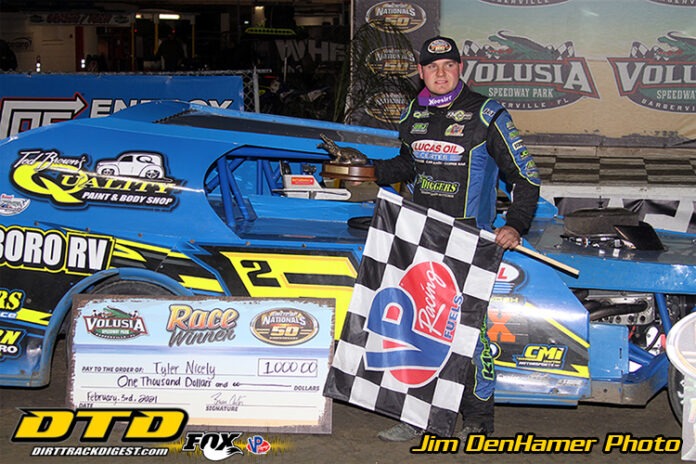 BARBERVILLE, FL – A grand total of 94 DIRTcar UMP Modifieds packed Volusia Speedway Park’s pit area Wednesday for night #2 of competition at the 50th DIRTcar Nationals, prompting a format change that called for two separate, 20-lap Features before the night was out.

Volusia’s reigning Reutimann Memorial winner Tyler Nicely, of Owensboro, KY, took advantage of another slick and smooth racing surface to grab the win in the first Feature, while the five-time and defending DIRTcar Nationals UMP Modified champion Nick Hoffman, of Mooresville, NC, did the same to score the victory in Feature #2.

Feature #1 – Tyler Nicely
Tyler Nicely seems to be picking up right where he left off at Volusia last November.

His then-brand-new Longhorn by Loenbro chassis powered him to his first career victory in the track’s marquee event, the Emil & Dale Reutimann Memorial, in November of last year. Less than three months have passed and he’s already back in Victory Lane. This time, making the pass for the lead on Lucas Lee and holding off another star-studded cast of competitors for his fourth career win in the event.

“All Speedweeks I’ve been trying to get this win; I’m glad it’s on this stage at Volusia,” Nicely said. “It’s always nice to win it with a bunch of cars, standing on this stage and getting a gator.”

Nicely’s been in action since the opening round of the Winternationals at East Bay Raceway Park two weeks ago and hadn’t been able to find Victory Lane through those five starts plus another last weekend at North Florida Speedway. But after a third-place finish in Tuesday night’s opener, Nicely cashed out with his momentum and advanced two spots higher to collect the $1,000 victory Wednesday night.

Nicely started on the outside of the front row and immediately went to work on polesitter Lucas Lee, catching him in open track and making the pass to his inside on Lap 5.

From there on out, it Nicely’s race to lose. Nobody seemed to have anything for the race leader by the end of 20 circuits as he crossed to collect the checkers. However, if there had been just one more caution later in the race, he may have had a familiar foe knocking on his door.

Kyle Strickler, of Mooresville, NC, may have gone though one of the most bizarre, painful, yet most successful runs to the front in DIRTcar Nationals history Wednesday night.

Earlier in the evening, Strickler was taken in an ambulance to a nearby hospital after severely cutting his left middle finger in the pit area while operating the lift his team uses to raise their car up.

“When I was in the ambulance after almost cutting my finger off, they told me, ‘it’s a hard no on you racing tonight,’ because that was the first question I asked them,” Strickler said. “We ended up going to the hospital, getting it stitched up and making it back here in time.”

Indeed, he did get back to the track on time. But only to tag the tail of Last Chance Showdown #1, where he snagged the final transfer spot into the first Feature. This set him up for a 23rd-place starting spot in that event, where he drove all the way back to finish third, making for what will surely be one of the most memorable nights of his career. 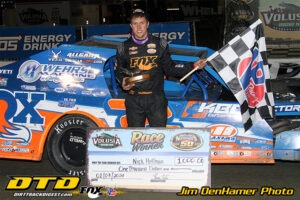 Volusia. That certainly showed again Wednesday night, as he took full advantage of it in collecting his 19th career DIRTcar Nationals Feature win.

Compared to the Feature event previous, Hoffman wasted even less time in moving to the front, making the pass on polesitter David Stremme on Lap 3. From there on out, nobody had anything for the two-time and defending UMP Modified national points champion as he crossed the stripe for the win.

He makes it look so simple on the DIRTVision cameras, but sometimes, much of the battle is won before the race even starts in the pit area. Like Tuesday night, it came down to a tire selection to help Hoffman pick up the win.

“I knew it was probably gonna latch-up there in the second Feature, so I went with the hard tire again tonight,” Hoffman said. “Once it started to latch-up, I got really tight and just couldn’t maneuver quite like I needed to.”

Hoffman’s Elite Chassis had yet another good showing with himself and Justin Allgaier finishing 1st and 3rd, respectively.

“I know every nook and cranny on that racecar, so that really helps. Just running my own chassis for the last eight years; we’ve got a really good balance, obviously, at this place. It just suits my style, momentum racing, and when it gets dead slick like this, it’s really where I’m the best,” Hoffman said.