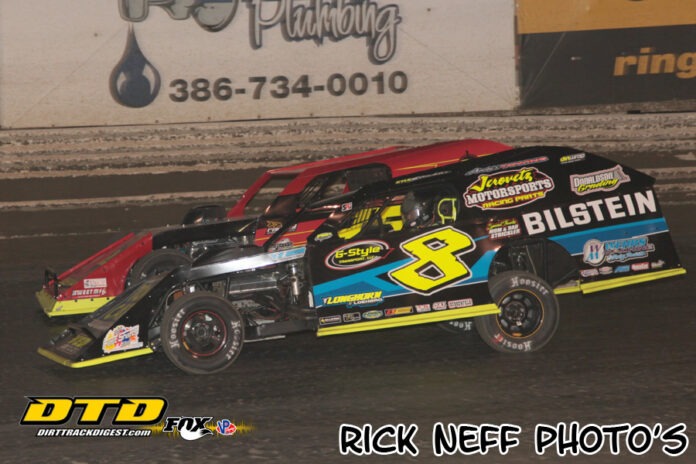 BARBERVILLE, FL – A new single-day record car count 96 DIRTcar UMP Modifieds signed-in to compete Thursday night at Volusia Speedway Park for Round #3 of the 50th DIRTcar Nationals and graced those in attendance with another double-shot of Feature racing action.

Jason Hughes, the Dirt Modified veteran from Westville, OK, made the move early on Wednesday night winner Tyler Nicely to hoist the gator trophy as a first-time DIRTcar Nationals winner in Feature #1. Kyle Strickler, with a bandaged-up finger and all, caught David Stremme in the thick of lapped traffic and made the move to win Feature #2. 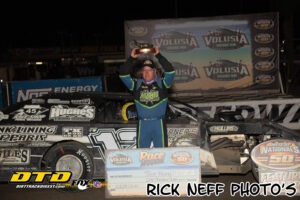 “I’m pretty happy, we finally got us a gator,” Hughes said. “I felt like we got one stolen from us last year, and to come back and get one this year is pretty good.”


Hughes started his journey to Victory Lane from the fourth position and wasted no time going forward, reaching the runner-up spot inside of the first five laps. Tyler Nicely, Feature #1 winner from Wednesday night, led the opening laps and looked to be the one to beat until an early caution flag stacked up the field with Hughes right on his tail.

The green flag waived and Nicely got a solid start, as did Hughes. They raced close for three corners before Nicely made a rare slip-up out of the groove in Turn 4, opening the door for Hughes down low to take the spot.

“[Nicely] got in there tight and shoved across the corner and I got turned underneath him, and that was what got us out front,” Hughes said.

Nicely, of Owensboro, KY, came back at Hughes to his inside just a few laps later but was unsuccessful. Hughes put it on cruise control after a few more restarts and took the checkered flag for his first time at Volusia, Nicely coming in right behind.

Steve Arpin, of Fort Frances, ON, bagged his first podium finish of the week and his first at DIRTcar Nationals since his championship year in 2007 with a third-place run Thursday night. Fellow Longhorn by Loenbro chassis driver Mike McKinney was scheduled to start third and was penalized to the tail for a late arrival to staging, but overcame the fault and made it all the way back up to eighth by the checkered flag.

Kyle Strickler went from the hospital, back to the track, from the Last Chance Showdown to the Feature and from 23rd to third in the Feature on Wednesday for one of the wildest nights in DIRTcar Nationals history. He backed that up Thursday night with his ninth career Feature win in the event, holding off longtime competitor Nick Hoffman in the process.

Fellow notable DIRTcar Nationals frontrunner David Stremme brought it home right behind them. Stremme, Hoffman and Strickler have become among the brightest faces of the UMP Modified division over the past few years, which Strickler made it a point to acknowledge in his Victory Lane interview on DIRTVision.

“These three cars here on the front-stretch here, we come down here and this Speedweeks means so much to us. We know who we’ve gotta outrun when we get here, and we all work really hard,” Strickler said.

Stremme kicked off the 20-lap Feature by jumping out to the lead in the opening laps, looking very strong and keeping Strickler and Hoffman at bay behind him. That was, until he hit lapped traffic.

Just past the halfway point, Stremme dove deep into a field of slower traffic, which gave Strickler and Hoffman the opportunity they needed to slip by. Which, they did, when Stremme got pinched a bit by a lapped car out of Turn 2 on Lap 13. Strickler got a great run out of the corner and drove firmly into Turns 3-4, sliding up in front of Stremme to complete the pass as they crossed the stripe.

“I was adjusting my driving style, and when we caught lapped traffic, it’s so tough when you’re the leader. So, that helped us out a bunch, and I think the track started coming our way too,” Strickler said.

Hoffman went with him one lap later to secure the second spot. A final restart appeared with 5 laps remaining but did not affect the running order; Strickler was just too smooth for anyone to catch.

The DIRTcar UMP Modified action continues Friday night at Volusia Speedway Park with one of the pit area’s favorite nights of the year – everybody runs a Feature! A total of five Feature races for the DIRTcar UMP Modifieds is preliminarily scheduled for competition, lined up by points totals after the already completed Features. Catch all the action on DIRTVision!