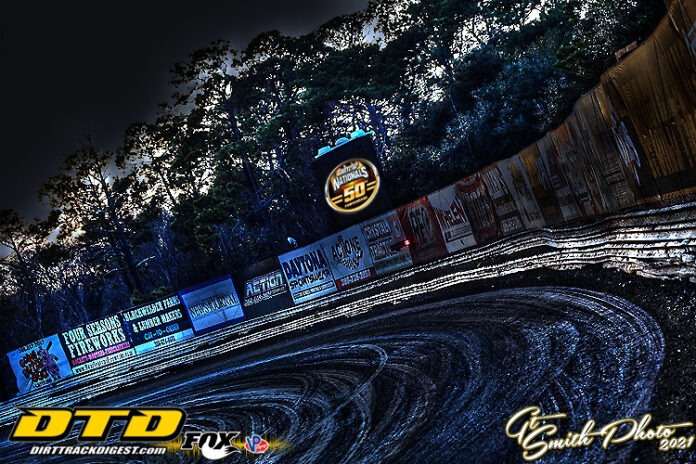 BARBERVILLE, FL – Ryan Flores built a UMP Modified with full intentions of racing it himself until an unexpected voice spoke up with interest in the ride.

Flores, a pit crew member for Team Penske, has been friends with Logano for several years, and Logano’s car chief Jerry Kelley helped him build the Modified. With the dirt race at Bristol Motor Speedway on the 2021 NASCAR schedule, Logano saw the opportunity to expand his dirt experience. Currently, that experience consists of two starts in the special Prelude to the Dream Late Model event at Eldora Speedway – finishing 20th and 13th, respectively.

“He probably pushed it along more, Joey did,” Flores said. “Joey is a pretty hard worker. What he does for a living is drive race cars. Now that there’s a dirt race, he wants to be well prepared for it. That’s the ultimate goal. We went and tested a couple weekends ago. The first question I had (for him) is if this is going to help him at Bristol or not. That’s the ultimate goal, and he said, ‘Yeah.’ He said he feels like it’s going to cross over really well. He’s like, ‘Why don’t we go run a couple of nights at Volusia if we’re going to be down there.’ We’ll see how it goes.”


To prepare for the event, Flores brought Logano to the 4/10-mile Friendship Motor Speedway in North Carolina. The track is D-shaped like Volusia, but a touch smaller than the half-mile track. Flores was impressed with what he saw from the rookie dirt racer and thinks Logano could have a good showing in his two races.

“He took to it pretty quickly,” Flores said. “He really did a pretty good job. We learned a lot of things we can do with it. We know the car is good because we have (Kyle) Strickler’s notebook. I’ve been helping Strickler forever. Honestly, every lap that that car has run, it set Quick Time at Charlotte, [Strickler] won the Heat Race and won the Feature. So, it’s an undefeated car. No pressure, right?

“That helps a ton. We know we have good equipment. That’ll help the learning curve pretty quickly. We’re just going to be down there getting laps. I think that’s going to be important for him to get comfortable.”

Flores has known Strickler – an eight-time UMP Modified winner at Volusia Speedway Park – since 2007, when he first moved to North Carolina. That’s led him to make multiple trips to Strickler’s shop and find a wrecked car in the back of it. He fed the idea of building a crate Modified with Kelley and the two go to work pulling it out of the weeds. They rebuilt the car, powder coated it, but a bunch of used parts from Strickler on it and had it ready for Flores to pilot. But two weeks before the Drydene World Short Track Championship at The Dirt Track at Charlotte, Strickler asked if he could run it.

Two weeks later, with Strickler’s #8 on the side of the black and white machine, they unloaded it for its maiden voyage. As Flores mentioned, the car won everything it entered.

Now, with Flores’ #15 back on the side, Logano will try his best against the best UMP Modified drivers around the World’s Fastest Half-Mile.

“First and foremost, it’s just going to be about getting comfortable with it,” Flores said about Logano’s learning curve. “But then having to line up to race, you just get four laps (of practice). I think that’s going to be the biggest difference for him. Then you’re qualifying and lining up for the Heat Race. Pulling tear-offs, things like that are going to be different for him.

“It’s like when Kyle (Larson) goes and races. It’s what they do. These guys are high-level guys. It’s a big difference when you work a 40 hour a week job and then go race, versus racing for a living at the highest level. They have a lot of resources. When Kyle Larson won at Port Royal (in the Late Model), he knows how to manage a race. He’s done it for 500 miles. To manage a 50-lap race, keep your tires on it, like he did the other night. These guys are pretty good.”