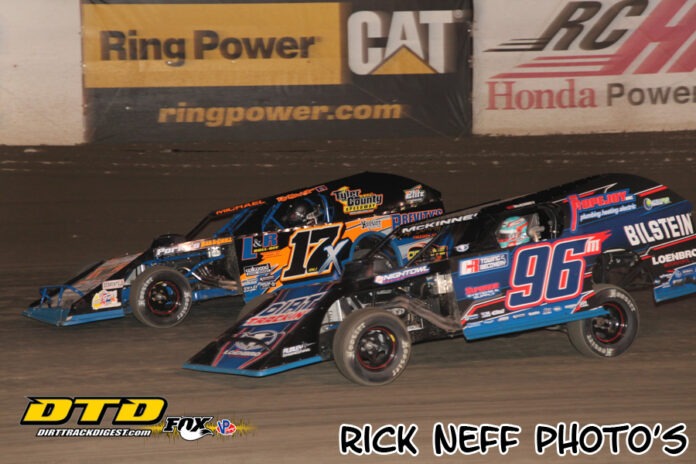 Night #4 of the 50th DIRTcar Nationals was all about appreciation for each and every one of the 96 UMP Modified drivers signed-in for competition; everyone got to form-up in the four-wide salute to the fans and race a 15-lap Feature for $700-to-win and a chance to stand in Victory Lane, front and center on the DIRTVision cameras.

Each race was lined up by the overall event points standings going into the evening, inverting both the top-10 starters in each race and the order the Features ran in. When all was said and done, four brand-new faces and one repeat winner from last year stood in Victory Lane, collecting their Volusia Gator trophies as DIRTcar Nationals Feature victors. 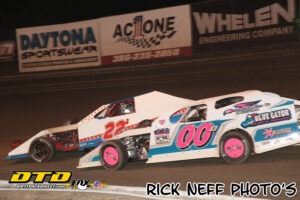 Feature night, setting the stage for his second act as Friday night’s only repeat winner of the five Features contested.


“We’re not in the race we need to be in, but it’s a far cry from dropping out nine laps into the Feature because we were terrible last night,” Reutimann said in Victory Lane. “Track’s a little bit different; they’ve done a great job. Track’s got a little moisture in it, so it was fun.”

Reutimann started 15th on the grid and advanced through the field rapidly, using the wrecks and restarts to his advantage to gain his first chunks of position. By Lap 3, he had already cracked the top-five and was hot on the trail of the leaders.

Reutimann finally reached the back of leader Taylor Cook as they got the two-to-go signal, and that’s when he pulled the trigger. A great run down the backstretch set Reutimann up for the pass on the high side coming out of Turn 4, which he executed perfectly to take the lead and the eventual win for his second career Volusia Gator trophy.

Crossing the stripe third was none other than the 2018 NASCAR Cup Series champion Joey Logano, making his DIRTcar Nationals debut in a UMP Modified. Starting dead-last 19th place on the grid, Logano avoided multiple wrecks in front of him and made several clean passes under green-flag conditions to grab the final podium spot in what was a very impressive first competitive start in a UMP Modified.

“I only got one gear, and it was to go,” Logano told DIRTVision pit reporter Chase Raudman in his post-race interview. “It was a good time, I finished third, that’s great, and learned a little bit. Got a little bit of damage to fix, and we’ll come back at it tomorrow night.”

Harris, a notable 602 Late Model driver, wasted no time, getting right to work on leader 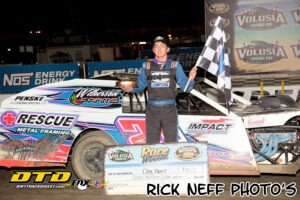 Troy Johnson from his fourth-place starting spot in the early going. He got a good run on Johnson on Lap 5, completed the pass and cruised home for the win after a late restart, despite making an error in car setup.

“We tightened it up for the slick and it ended up being hammer-down,” Harris said in Victory Lane. “We had a little hiccup, but we recovered and [the car] was awesome tonight.” 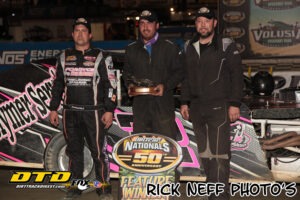 The third UMP Modified Feature was mostly a game of attrition and staying out of trouble. Chad Roush did this the best out of his 18 other competitors.

While several wrecks took out multiple cars before a single lap was ever completed, Roush kept his nose clean up front and wasted zero time, making the pass to go from third to the lead on Lap 2.

A few restarts were thrown at him with high pressure behind from names like KC Burdette and Tony Anderson, but Roush held strong out front to pick up his first career DIRTcar Nationals victory.

“We gave one away a couple years ago down here, so I had to redeem myself,” Roush said in Victory Lane.

In what was easily the best race of the night for the lead, Nick Allen squared off with three-time NASCAR Truck Series champion Matt Crafton and came out on top in the end for his first career Volusia Gator trophy.

Allen pulled out to a comfortable lead from the outside pole in the early going but was quickly met by a challenge from seventh-starting Crafton, who was a rocket ship on the bottom.

Crafton pulled up alongside Allen and took the spot away for two consecutive laps as the field eclipsed half-way; their side-by-side battle bringing those in attendance to the edge of their seats. Allen then cracked the whip on the top side and wrestled the lead back, fending Crafton off in the final laps and crossing the stripe first to collect the $700 check.

“I knew [Crafton] was good around the bottom; I just couldn’t hold the bottom like he could,” Allen said. “I was just trying to carry a little more momentum through the middle.”

With Strickler, Hoffman, Stremme, Nicely, Arpin, McKinney and Hughes all in the same Feature, Richard Michael Jr. knew he had to be on his A-game if he wanted to win his first Volusia Gator trophy from outside the front row Friday night.

When the green flag dropped on a re-do of the original start after polesitter Kyle Strickler hit the Turn 2 wall, taking him out of the race, Michael pulled that A-game right from out of his pocket and put it on full display, leading all 15 en route to his first DIRTcar Nationals victory in dominating fashion.

“This is probably the biggest one of my career,” Michael said in Victory Lane. “We used to come down here a lot; haven’t been down here in about eight years. Every time we came down here, we didn’t have any good equipment.”

Once he got the lead on the original restart, Michael took off and flat-out ran away with the win, pulling away from the stacked competition in his Elite Chassis, built by Nick Hoffman, who finished fourth.

“We just put this car together about a week and a half ago at Nick [Hoffman’s] place. I’ve just got to thank him; if it wasn’t for him, there’s no way we’d be in Victory Lane,” he said.

The first of the two Gator Championship qualifying nights for the DIRTcar UMP Modifieds hits the track Saturday night in Round #5 of the 50th DIRTcar Nationals at Volusia Speedway Park. Half of the field in attendance will race while the other half will have the night off and return on Sunday for their qualifier night, all helping to determine a portion of Monday night’s starting field for the $5,000-to-win Gator Championship finale.