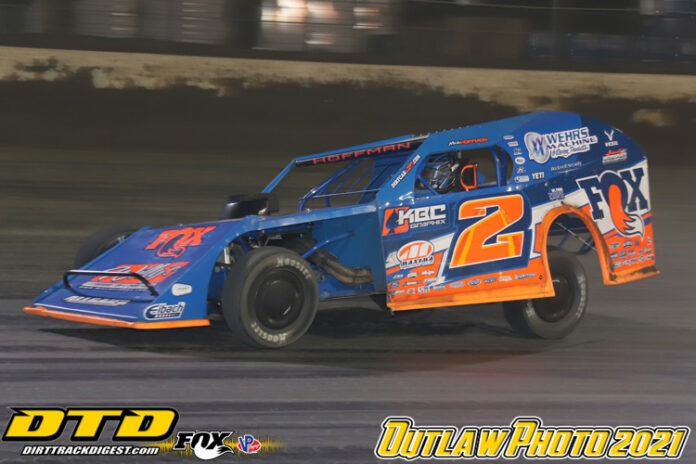 The first Gator Qualifier from the rained-out portion of Saturday night was contested immediately following the Sunday Qualifier and saw the return of a former DIRTcar Nationals champion to Victory Lane for the first time in 14 years. Steve Arpin, representing Longhorn Modifieds by Loenbro Motorsports, was presented with his first Gator trophy as a DIRTcar Nationals Feature winner after leading flag-to-flag in Gator Qualifier #2.

The top-10 finishers from each of the Qualifiers have now been locked into Monday’s $5,000-to-win Gator Championship Feature; the top-five will redraw for their starting spots before the Feature Monday. Everyone else will be placed into a Last Chance Showdown event to try and get one of eight remaining spots on the grid of the big show.


Nearly nine years ago, Nick Hoffman captured his first Gator trophy at Volusia with a Feature win, then an up-and-coming UMP Modified driver with no national championships, Summit Modified titles or Big Gators. Sunday afternoon, he stood in Volusia Victory Lane after his third victory of the week in the 50th DIRTcar Nationals, now a favorite to win the Big Gator a sixth time.

On the track, it was another giant helping of Elite Chassis dominance, not only by Hoffman who led all 20 laps nearly unchallenged, but by many of Hoffman’s Elite customers. Four of the top-five drivers in the official finishing order are Elite pilots, including Hoffman himself, Garret Stewart, Matt Crafton and Justin Allgaier.

Hoffman now has a shot for the pole on Monday as he’ll be one of ten drivers in the redraw before the $5,000-to-win Gator Championship Feature. Sunday’s Qualifier redraw could be a sign of things to come for the five-time and defending event champion.

“Tonight, I was on my game on the redraw to draw the one, and I think that was crucial just to get out and set the pace and control the race myself,” Hoffman said. “My stuff’s just really good when it cleans up like that.”

Regardless of where he starts, there’s plenty of time in the 30-lap Feature to get it done from almost anywhere on the grid. He’s got the car, confidence in the seat and success in the history books on his side as he chases another coveted trophy that he comes to Florida every year in search of.

“[The Big Gator] is one of the most prestigious trophies in all of motorsports, and I’m lucky enough to have a bunch of them,” Hoffman said.

The last time Steve Arpin was in Volusia Speedway Park Victory Lane, he was a 23-year-old Modified ace who had just claimed his first DIRTcar Nationals championship on the back of five-consecutive Feature wins. On Sunday night, he made a big trip down memory lane with a dominant victory in the second of two Gator Qualifiers. 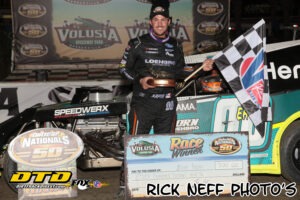 “Honestly, I have never in my life had such a proud moment in my racing career,” Arpin told DIRTVision pit reporter Chase Raudman after the race.

Arpin, the Rallycross racer and Longhorn by Loenbro pilot, started on the pole after a Heat Race win and cleaned-up in the Feature, leading all 20 laps for his first Gator trophy and first Volusia win since his event championship year in 2007.

Three of the top-six drivers in the Feature finishing order were Longhorn by Loenbro cars, including Nick Allen and Mike McKinney who have been fast all week.

“To have these Longhorn by Loenbro cars just so consistently fast for our first time out, honestly, the only thing I’m more excited about than standing here is coming back next year,” Arpin said.

McKinney did try and swipe the lead from Arpin on one corner after a restart, attempting a big slide job as they dove into Turn 1. He was unsuccessful and later faded back to sixth, one spot out of the redraw, but gave those watching on DIRTVision a bit of mid-race excitement.

The Longhorn by Loenbro bunch has been fast all week, notching several podiums, top-fives and top-10s. Arpin has been taking notice and expressed his gratitude for each of their new customers on the property.

“I remember when my dad was out here watching me in 2007, and I could just see it in his eyes how proud he was of me,” Arpin said. “I feel like that now watching Tyler Nicely, Brandon Green, all these guys coming out here.”

The seventh and final round of racing for the DIRTcar UMP Modifieds at Volusia Speedway Park goes down Monday night in the 30-lap, $5,000-to-win Gator Championship. Last Chance Showdown races will kick things off before the redraw; catch all the action live on DIRTVision!