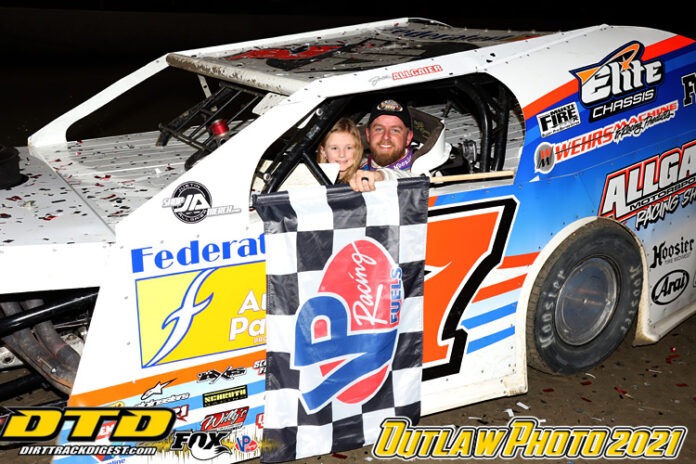 For his efforts, a $5,000 check in his pocket and one of the most coveted dirt track racing trophies in the world headed back to his race shop.

Over 100 different drivers entered at least one event over the seven-day stretch, and Allgaier has now topped them all. Including his car builder and the newly crowned six-time Big Gator points champion, Nick Hoffman.

“We’ve been coming down here for a number of years,” Allgaier said. “What this week means to all of us as racers… I really don’t think people understand what the DIRTcar Nationals is all about.

“To have over 100 cars here this week and just to grind it out and battle some of the best racers in the country is truly special.”

Hoffman started on the pole of the 30-lap main event and looked as strong as he ever had been before, opening up a solid gap over the other leaders until the lapped traffic hit on Lap 11.

“Then they were four-wide down the back-straightaway; I got tight getting into [Turn] 3, so Justin passed me, then [Michael] Altobelli passed me. I think [Spencer] Hughes was alongside me; luckily the caution came out and saved me right there.”

With Hoffman now in his rearview, it was Allgaier’s time to shine. He picked up the pace throughout the rest of the race, keeping Hoffman, Altobelli and eventual third-place finisher Mike McKinney at bay behind him through several restarts.

McKinney came from 12th on the starting grid and made big gains throughout the first half of the race, cracking the top-five by the halfway point.

“There was a mud ring down on the bottom and some guys just weren’t really hitting it right,” McKinney said. “Once I hit it, I’d just wait for those guys to push up out of the groove and I was already set up to pounce on it when they made a mistake.”

Hoffman tried mightily throughout the final laps to catch Allgaier after making his way back around Altobelli for second, but just could not muster the speed he needed to get by his fellow Elite Chassis driver in the end. However, he was proud to see so many of the cars be built have success at Volusia over the entire week. His sixth consecutive Big Gator points championship is just icing on the cake.

“It’s one of the best years that I’ve had down here, for sure,” Hoffman said. “Very consistent every night. To run second to one of my team cars is pretty cool. I couldn’t ask for a better person to run second to.”

In Victory Lane, Allgaier jumped atop his Elite Chassis #7 before the confetti cannon was even in position, displaying his excitement after winning one of the biggest and most meaningful dirt races of his career after so many attempts at it throughout the past several years.

“I was able to win a [little] Gator on multi-Feature night one time, and I knew how much that meant to me. But this Big Gator, to add our name to the list, to beat the caliber of drivers we had here this weekend… there were a lot of teams that put on an all-out assault to try and knock Nick off, and we just got lucky enough that we were the ones to be able to do it,” Allgaier said.

This concludes the DIRTcar UMP Modified action in the 50th DIRTcar Nationals, but the Late Models are just getting started. Night #2 of Late Model Week gets underway Tuesday night with the second show for the DIRTcar Late Models; watch all the action live on DIRTVision!