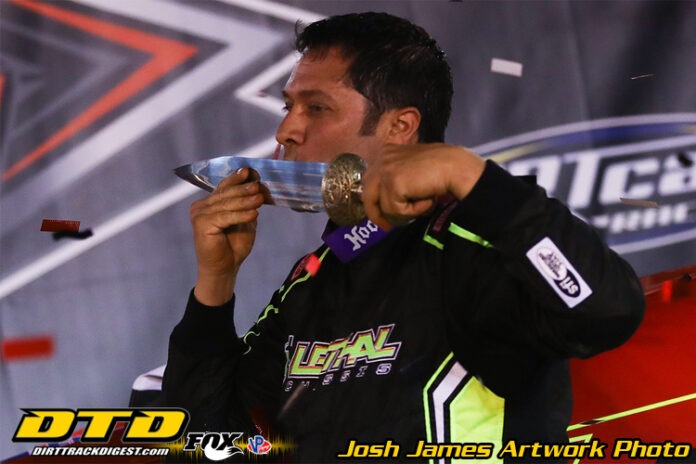 BRISTOL, TN – He’s been one of the fastest UMP Modifieds at Bristol Motor Speedway all weekend, and now he’s got the hardware to show it.

David Stremme wheeled his Lethal Chassis #35 to Victory Lane Friday night on the first race night of the World of Outlaws Bristol Bash in dominating fashion, leading all 20 laps en route to a $5,000 victory over Kyle Hammer and Ryan Ayers.

“I tell people when you walk in here, you gotta look around,” Stremme said. “To win here is pretty cool. Just to win at anything anymore is hard.”

It was hard to miss the Stremmes on the DIRTVision cameras through the night. David showed the way around the dirt-covered half-mile, setting Quick Time in Qualifying and made the winning pass on Hammer in Heat 3. His wife Ashley then worked her usual magic in the redraw and pulled the pole for the Feature.

At the drop of the green, Stremme wasted zero time making his presence felt, wrestling the lead away from Hammer on the low side as they rounded Turns 1-2. From that point forward, it was all Stremme’s race out front, as he piloted his #35 machine around the fast, high-banked track.

“I think the track crew did a great job. I feel for the amount of cars we have here, it was in a lot better shape than I thought it would be,” Stremme said. “You could move around quite a bit, and that’s all you can ask for.”

As a former NASCAR star on its concrete surface, Stremme has gotten to know Bristol’s high banks well since the start of his motorsports career. While the banking has been cut down to 19 degrees on the dirt, he said he’s been able to recognize the similarities between the two configurations and use it to his advantage.

“It still has the same characteristics – each corner is different. Obviously, I’m able to use that, and there is stuff there that I felt I could still do, whether it was in a [NASCAR] Cup car or Xfinity car,” Stremme said.

Hammer was solid up front all night long in his Elite Chassis #45. Initially, he lost second to Taylor Cook on Lap 7, after a restart, but regained the spot when Cook ran into issues and dropped out with five laps left. Even with the solid runner-up, Hammer still wants to be better for Saturday’s finale.

“Definitely learned we need to be a little stiffer on the right-front,” Hammer said. “At these speeds, these things really upset our cars.”

Ayers had a great showing in his Lethal Chassis #6, coming all the way from 11th to finish third. With a wreck on the initial start and a great run down low on Lap 1 to get by cars, Ayers was already in fifth as he crossed the line to complete the first circuit.

After gaining two more spots before the home stretch, Ayers was forced to play some tough defense for a moment, as a hungry Nick Hoffman was putting the pressure on from behind for the third spot.

Hoffman ultimately slipped on the high side in the end but showed Ayers a better line in the process.

The DIRTcar UMP Modifieds are back in action Saturday night, April 10, for the $10,000-to-win Bristol Bash finale alongside the World of Outlaws Morton Buildings Late Model Series – catch all of the action live at the track or on DIRTVision presented by Drydene!