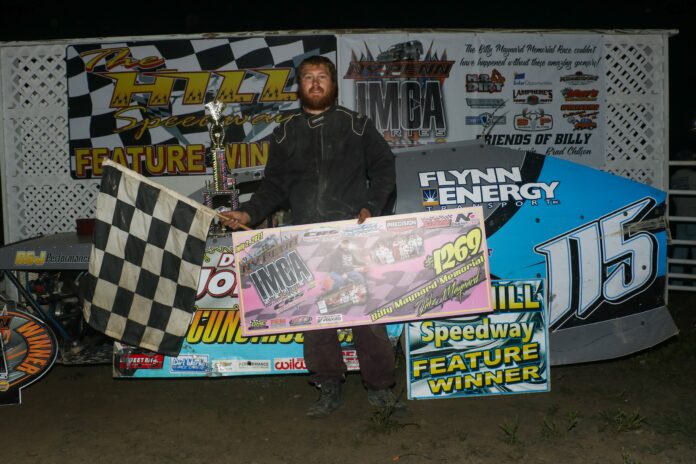 Though only two races had been completed in the NY Penn IMCA Modified Series 2021 season, luck had not been on the side of Brad Sites. Although he entered the Billy Maynard Memorial at The Hill Speedway on Friday, July 9th as the points leader, the previous two races went far from smooth. While leading in both previous races, he would find himself backwards, having to climb his way back to the two top five finishes that helped propel him to the top of the standings. At the end of Friday night’s race, he would once again have to overcome adversity to claim his first series checkered flag.

Sonny Terry and Rick Watt would lead the field of 18 to the green flag at the Monroeton, PA bullring, with Terry jumping to an early lead of the 30 lap feature. Racing would not last long as Rodney Morgan would come to a stop in the middle of the field in turn three, causing cars to scatter but everyone would continue on. When the green flag resumed racing, Terry would again take off with the lead, but he would closely pursued by the third place starter, Brad Sites.

Sites had barely made the start of the race, as a broken coil at the end of his heat race. The problem nearly sidelined him for the evening as he and his team scavengerd the pit area to find a replacement. Overcoming the issue, Sites would chase down Terry for the opening laps until Terry slowed and went pitside, his night ending and relinquishing the lead to Sites.

Over the course of the first 10 laps, drivers such and Jake Maynard and Rick Watt would also find themselves out of the race with issues. Caution flags would sprinkle themselves throughout the event foe spins, as the cream would start finding way to the top. The series’ most recent winner, Keith Jack Lamphere would find himself moving towards the front, but would spin out of the second position, moving him back in the field.

As laps clicked off, Sites would continue to lead, getting challenges from Shawn Bruce and Eddie Sites over the course of the race, but would not give way. Lamphere would carve his way back throught the field and once again challenge Sites for the top spot as he worked the top side. Late race cautions would keep Lamphere from making his way around Sites, who took the checkered flag over Gary Lamphere, with Keith Jack Lamphere rounding out the podium. The win puts Sites on the ballot for the IMCA Supernationals All Star Race, as well as gives him a guaranteed redraw spot for the season finale at Penn Can Speedway on September 25th.

The next race for the NY Penn IMCA Modified Series will take place at the Afton Motorsports Park on Friday, July 30th. 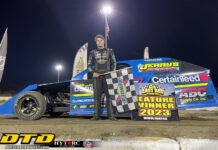 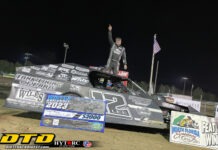