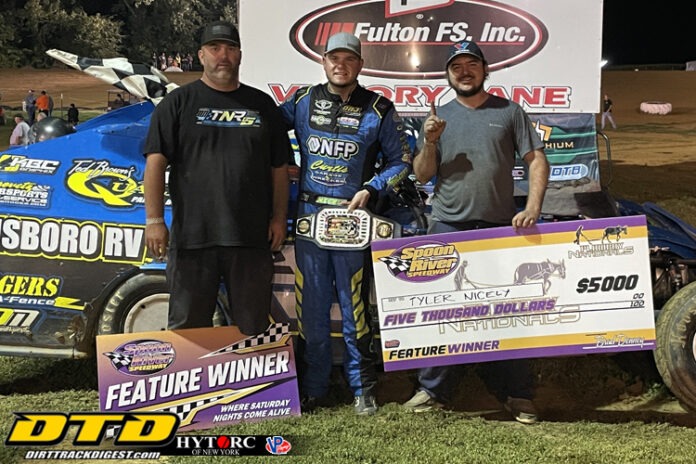 LEWISTOWN, IL – Tyler Nicely emerged from his Elite Chassis #25 in Spoon River Speedway Victory Lane to celebrate, checkered flag and Plowboy Nationals belt trophy in-hand. He cracked a smile to show his joy in winning one of Illinois’ biggest UMP Modified races, but couldn’t help from thinking about his longtime friend, competitor and car builder Nick Hoffman, recovering in the hospital from a serious traffic accident Friday morning.

“I really just wanted to get this one for Nick,” Nicely said, reflecting his thoughts after the race. “I know how bad he wants to be here, and I wish he could be here with us.”

Hoffman, Elite Chassis owner/founder and three-time DIRTcar national champion, was slated to compete in each of the three Illinois Labor Day Weekend events. One day after visiting him in the hospital, Nicely went out and bagged a solid third-place at Fairbury Speedway on Saturday, then backed that up with a win in the 32nd annual Plowboy Nationals on Sunday.

It’s Nicely’s 11th DIRTcar-sanctioned victory of the season and his first in the prestigious Plowboy Nationals event. He bagged the $5,000 grand prize and a big boost of confidence in a neck-and-neck UMP Modified world.

“It feels great,” Nicely said. “Any time you can win a big UMP Modified race right now, I feel like you’re doing something. There’s so many guys, and it’s just gotten so competitive and everybody’s so close.”

Nicely, of Owensboro, KY, took the green from inside Row 2 and ran securely in the top-three for the opening laps. He made the move past Trevor Neville for second on Lap 5 an began to run down leader Josh Allen before an incident shook up the field with the first caution on Lap 10.

A three-car spin erupted right in front of the leaders in Turn 1, which Allen got a piece of in the melee, damaging his car and sending him to the work area. By coming to the work area under yellow, Allen was forced to give up the lead, handing it to Nicely.

Now in control of the field, Nicely was able to set the pace of the race. With the lightning-fast and tacky track conditions after the rain delay, he took advantage of the hammer-down speeds and defended the lead with distance, never letting his competitors get close enough to make a pass.

“I usually like just going green flag, but tonight with how the racetrack was – it was dirty from the middle up – so it just made it a lot easier when the cautions fell,” Nicely said. “We never really go into lapped traffic.”

Nicely defended the lead through multiple restarts over the next 40 laps, holding off a hungry Mike McKinney, who pressured him for over half of the race.

“I felt like we were the same speed there, I just wasn’t any better than him,” McKinney said. “I’m pretty sure [Nicely] was on a harder tire, and at the end, my tire wasn’t sticking like it needed to.”

McKinney, the 29-year-old former DIRTcar national champion from Plainfield, IL, had a trying weekend up to this point, posting back-to-back finishes outside the top-10 on Friday and Saturday. After a 1st-to-3rd slip in his Heat Race Sunday, he and his father David went to work on the car and found a good combination, just in time to bag a runner-up finish.

“After that Heat Race, we were really dejected, so we’re just happy to bounce back,” McKinney said. “We tried a bunch of stuff all weekend, taking a big swing at these big shows and it didn’t really pay off. I’m just happy to end the weekend on a good note.”

Crossing the stripe in third was Longhorn Chassis UMP Modified house car pilot Ethan Dotson. The 23-year-old Californian surged through the top-10 from his eighth-place spot on the starting grid, using the high line momentum to make passes in his first big event at Spoon.

“I was just running the top, kinda buzzing it where they weren’t,” Dotson said. “It was kinda one-laned around the bottom. We’d get lucky every once in awhile and then sometimes it would bite us whenever somebody would break our run.” 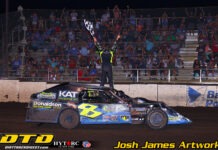 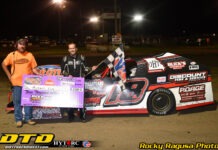