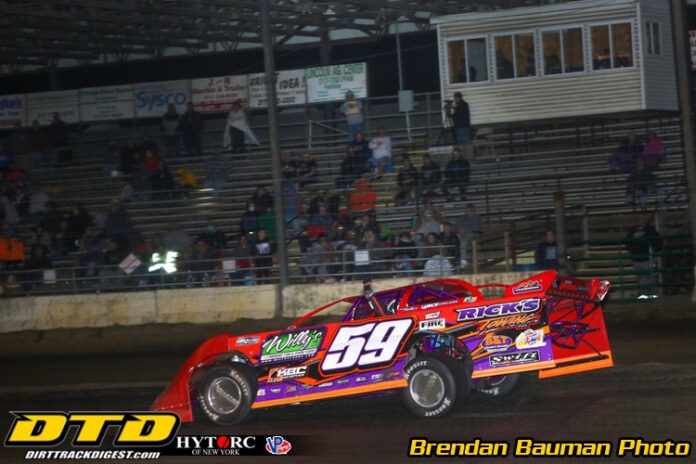 LINCOLN, IL – The 39th season of weekly DIRTcar Racing is officially in the books. Another stacked roster of 118 cars across five different divisions packed the Lincoln Speedway pit area Saturday night and closed out the regular season with five entertaining Features.

Making the haul all the way from Lake City, MI, to compete, 2022 DIRTcar East Region champion Eric Spangler came to Lincoln for one reason – win. Time was wearing thin on his quest to move up in the national points standings, and he made the most of the opportunity.

By the end of the 25-lap Feature, not only had he won the race – he dominated. Spangler set the fastest lap of the night in Qualifying, won his Heat Race and led all 25 laps en route to his first career DIRTcar Fall Nationals Feature victory.

Donny Walden crossed in second while another notable figure completed the podium behind him. In only his second race back from a five-year hiatus, Steve Sheppard Jr. crossed the stripe in third after a strong showing up front.

Climbing atop his Hughes Racing Chassis No. 24H in Victory Lane, a somber smile was painted across Mike Harrison’s face as he saluted the crowd, checkered flag waving in the air. He had won the race, and clinched his eighth DIRTcar national championship, but it was not all smiles and high-fives from the crew.

In Victory Lane, Harrison took time out of his interview and dedicated his final points win of the season to the late Rick Eshelman – announcer for the World of Outlaws Late Model Series and countless other DIRTcar-sanctioned events and series – whose passing was announced by the World of Outlaws & DIRTcar Saturday afternoon.

“Rick was a staple in our sport,” Harrison said. “He took care of all of us in the pits. He was always driving around. Not only was he a great announcer, he was a great man and a great friend to all of us in the pit area. It’s a major loss to dirt racing.”

On the track, Harrison dominated, leading all 20 laps for his first Fall Nationals victory at Lincoln. Though he had already clinched the national championship coming into the race, he placed the cherry atop the sundae with his 25th Feature win of the season and took a moment to reflect on the year’s accomplishments.

“We didn’t come into the year racing for points,” Harrison said. “Like I say all the time – we just come to race. We come to race and do our best and try to win races, and just let the results take care of themselves.

“You’ll have highs and lows, and we definitely had a lot of highs this year.”

It was one heck of a weekend for Aaron Heck, and by sheer willpower and skill, he managed to pull-off a victory.

“Yesterday after Hot Lap/Qualifying, I blew-up a motor, drove back to Mt. Vernon, put another one in with my two uncles and got back here 2:30 in the morning,” Heck said. “If you had told me I was going to do this tonight, I’d have called ‘em a liar.”

The 2020 national champion from Mt. Vernon, IL, claimed his third Fall Nationals Feature win in the last two years Saturday night, taking the lead late after two separate incidents with the first two leaders cost them their spots out front.

Polesitter Devin McLean looped it all by himself while in the lead on Lap 7, sending him retiring to the pits. Six laps later, Fast Qualifier Jose Parga made contact with a lapped car in traffic, spun him around and was sent to the tail for causing the incident.

This handed the lead over to Heck, who drove it the rest of the way for a big win to cap-off the regular season. Though there were 26 other cars to contend with, Heck was only interested in beating his longtime rival, Jose Parga.

“That’s the only guy I wanted to beat, just because he’s the champion this year,” Heck said.

In a wild ending to the Chevy Performance Crate-engine powered 20-lapper, BJ Deal walked away with the win after near chaos ensued in the final three laps.

Friday night winner, Guy Taylor, had led since the drop of the green and appeared to have the car to beat once again, until he slowed dramatically coming to the two-to-go signal and spun in Turns 1-2, collecting a few other cars in the process.

Taking advantage of Taylor’s sudden issues, Deal slipped past him into the lead before the melee unfolded and led the field back to the checkers on the ensuing restart to score his first career DIRTcar Fall Nationals Feature win.

“I just tried to take care of the tires and be patient,” Deal said. “I thought, maybe around Lap 5, that I was being too patient, so I picked it up a little bit.

“I was kinda waiting for the flagman to give me the five-to-go [signal] so I could start launching a little bit. When he gave me the signal, it was time to turn on the burners.”

For the second-straight year, Nick Johnson is a DIRTcar Fall Nationals Feature winner in the Sport Compact division.

Johnson, of Bartonville, IL, took advantage of an incident between the two leaders in the early going – Allan Harris and Dakota Schmick. He took the lead on Lap 4 and never relinquished it, leading the field back around the checkers to bag the win.