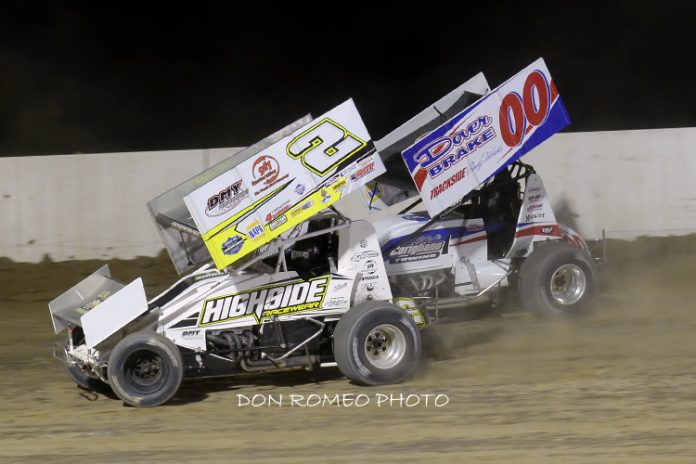 Some race fans can be quick to criticize or downplay a win when the driver starts on the front row. Some also say the quality of a race goes down when a driver leads every lap, and doesn’t have to face any ‘real’ challenges because they ‘don’t have to pass any cars.’ Don’t get fooled – Danny Varin showed everyone on Sunday night at the Weedsport Speedway why those statements are false, picking up his fourth Empire Super Sprints (ESS) win of the season and completing the weekend sweep. Two A-main events won in less than 24 hours? Not bad…

Varin finished second in his heat race and drew a front row starting spot for the second night in a row. Ironically, he and Jonathan Preston drew each other’s starting spots from the night before at the Fonda Speedway, this time with Varin at the point and Preston the outside pole. Almost a mirror performance of the previous night, it was all Varin from green to checkered as he again led all 25 laps on his way to victory, making it 50 consecutive ESS feature event laps led for the Dover Brake 00.

“We really did our homework this week. The draw was a huge help too,” Varin said. “Everything kind-of fell into our hands. It’s tough coming from the back to the front and we were just lucky enough to draw good positions this weekend.”

Varin was able to wheel his car around the top side of the speedway to get around multiple waves of lapped traffic, simultaneously fending off charges from fifth-place finisher Jonathan Preston in the early going, and runner-up Lucas Wolfe later in the race. Wolfe made the pass for second in turn one on a lap 13 restart, and started a charge for the leader. Varin was able to keep a good distance from the Pabst Blue Ribbon 5W until around lap 22, when Wolfe was noticeably gaining on him. Wolfe stayed within 5 car-lengths until the white flag, when he decided to make one last deep dive into turn one. But Varin was just too smooth on the top side, getting around more traffic and widening the gap down the backstretch, sealing the victory.


“The lap cars were treacherous. A couple times, I’d catch up to them, they’re running the top and I’d go to the bottom, and they’d go to the bottom right in front of me,” Varin said. “I know I’m losing a whole bunch of time. You just have to catch them at the right spot and last night I felt like I did, I caught them at the right spots and right times. Tonight, I feel like I really struggled. Every time I went to go make a move, I predicted wrong.

“I had to keep on lifting; I didn’t want to get pinched. I knew I was leading so I couldn’t take too much of a risk,” he continued. “I just had to lay back and just be as patient as I could.”

He may have just missed qualifying for the A-main at Knoxville on Saturday, but what dedication to sprint car racing Lucas Wolfe and his crew showed on Sunday, flying to New York from Iowa in the morning to be with all of us at Weedsport by the evening. Coming from the 12th starting position, Wolfe made a mid-race charge to the front, going from 12th to fourth in 12 laps. On a lap 13 restart, he made the pass for second going down the frontstretch and into turn one, putting him right behind Varin. Although unable to catch and pass the leader in the closing laps, Wolfe made a valiant effort to go from worst-to-first out of all the redraw cars.

“It was tricky. It was hard to make up much ground at any point throughout the race. The restarts were the best thing I had going for passing cars,” Wolfe said. “I was ultimately able to find my way in second, kind-of sooner than I thought. In a way, those two restarts went pretty good because I was struggling a little bit in traffic, trying to make up ground prior to that.”

Wolfe spent a decent number of laps chasing down the leader after taking second, using multiple grooves to try and get around the lapped traffic as well. He may have come up one spot short of the win, but was pleased with his overall performance.

“I tried a few different lines to move around a little bit and try to track them down, just was unable to make any ground up on any of those. We never really got into enough traffic that he [Varin] got delayed enough that allowed me an opportunity to close on him,” he continued. “At times, I got a little bit closer, but once he got clear of one it kind-of widened back out a little bit. All things considered, I just didn’t have enough on this particular occasion but coming from 12th to second is good at any point, so I’m happy with that.”

His qualifying efforts may not have gone exactly the way he planned, but Jason Barney made one heck of a drive to get the final spot on the podium in the closing laps of the feature event. Coming all the way from the 14th starting position, Jason said he was disappointed with his timed warmup and heat race efforts but credits his crew for making the right changes to the car to get him to the front in the end.

“We made some good adjustments on the racecar, just kept flipping through the notebook and doing a little bit more of what we did last year,” Barney said. “The car was really good, [my crew members] did a great job on the car. My guys just give me really good stuff, I’ve just got to do the right things behind the wheel.”

In fact, Barney was so content with his car setup in the feature that it became hard for him to decide which lane to run when he reached the front of the field.

“Once we got into clean air, I just had absolutely no idea what to do because the car was so good either way,” he said. “Laps click by here so fast on the racetrack and it’s so hard to really have a definitive line when the racetrack’s good and good on the top, and your racecar is so good.”

Barney said he hasn’t had the greatest last month-and-a-half of racing, but this third-place finish does give him a bit of confidence back.

“I was kind-of hoping for a caution with seven or eight to go, but it was what it was,” he said. “I felt like it was a good points night and it kind-of gave us a little confidence back – we’ve been struggling here. It wasn’t a great month of July and August hasn’t been that great either. But we’ve got another couple of weeks after this, and hopefully we can finish out August good.”

Two nights of racing, two good car counts. Another full field of 30 ESS sprint cars lined the pits for Sunday’s $2,000-to-win, 25-lap A-main event, while 31 were at Fonda the night before.

Recognize this top-three finish from another ESS event? If so, you’ve got a pretty stellar memory, because you’d have to go back to October of last season at the Utica-Rome Speedway to find the other ESS top-three finish of Wolfe, Varin and Barney. All three competitors have cars powered by Jimmy D’s Speed & Machine, making it back-to-back years for the Syracuse engine builder with an all-top-three podium. Jonathan Preston also sports a Jimmy D’s engine; he came home in fifth.