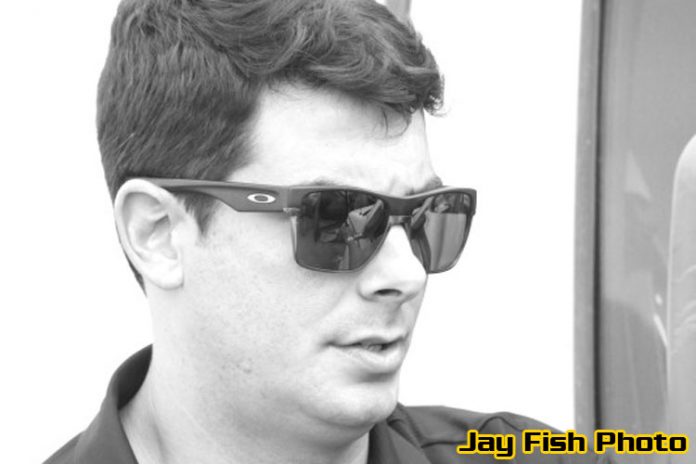 BECHTELSVILLE, PA – Stewart Friesen made the most of his opportunity to race at the Grandview Speedway on Saturday night.  The Sprakers, N.Y., driver and former regular, made the most of his rare visit to capture the victory in the VP Racing Fuels Bruce Rogers Memorial to pocket a hefty $7,500 payday.

Timmy Buckwalter took the lead at the drop of the green flag in the 50-lap brawl, taking off in front of Don Norris and Mike Gular. Gular got the best of the fight for second, and immediately went to work on Buckwalter. After a couple of laps of drawing even, Gular got the run he wanted off the bottom of turn four to lead lap 11. Two turns later, Buckwalter pulled to the infield with mechanical issues.

Gular took advantage of Buckwalter’s misfortune and established a solid advantage over a torrid battle for second between Norris, Friesen, and Craig Von Dohren. Lap after lap, Gular inched away while the trio battled top, bottom, and middle for second.


With 20 circuits in, Friesen finally cleared Norris for second, with Von Dohren following through for third. Two laps later, Brian Hirthler spun from a top ten spot to bring out the first caution of the race. Gular hung tough the next quick dash, before Matt Sheppard blew a left rear tire to slow the pace on lap 24.

“I used my tires a little bit early, so under that last caution I just let them come up to temperature,” Friesen said with a laugh, citing the temperatures that had dropped from 80 to a chilly 50 with a stiff wind throughout the night. “Mike (Gular) is a great friend of mine, known him a long time and we just had an awesome battle at the end. I tried to work that top, but it went away and the bottom came in at the end. It was a great race.”

After the next restart, Gular quickly established a big lead over Friesen and Von Dohren. Gular’s lead maxed out by lap 35, but then both Friesen and Von Dohren began chipping away as lapped traffic loomed. The first few slow cars Gular encountered pulled to the infield, but Friesen continued to close.

Much of the mid portion of the race saw the top three blasting the cushion, but Friesen and Von Dohren dropped to the bottom and picked up time. By ten to go, Friesen was within a car length, and at five to go, Friesen had caught Gular and Gular caught traffic. Even on lap 46, and to the lead on lap 47 was Friesen, rolling under Gular and around lapped cars.

Gular stayed locked to Friesen’s bumper, but Friesen slipped under one more car coming to the white flag that Gular could not match, giving Friesen the advantage he needed to collect the massive paycheck.

Polesitter Ryan Lilick took the early lead after a complete restart in the Sportsman feature with Jesse Landis, Brad Grim and brothers Brian and Kevin Hirthler, both doing double duty in pursuit.
Grim led the sixth lap, but that was short-lived as Lilick was back in front the next time by.
Lilick’s misfortune when his car broke on the 11th lap was beneficial to K. Hirthler when he now inherited the lead.
Grim made several runs on K. Hirthler, but each one fell short as the lead remained the same while B. Hirthler, Dylan Swinehart and Jim Housworth were in the wings hoping for one of them to falter.
K. Hirthler never surrendered the lead and scored his first win in the division followed by Grim, B. Hirthler, Swinehart and Mark Kemmerer, Kevin’s teammate for the night.