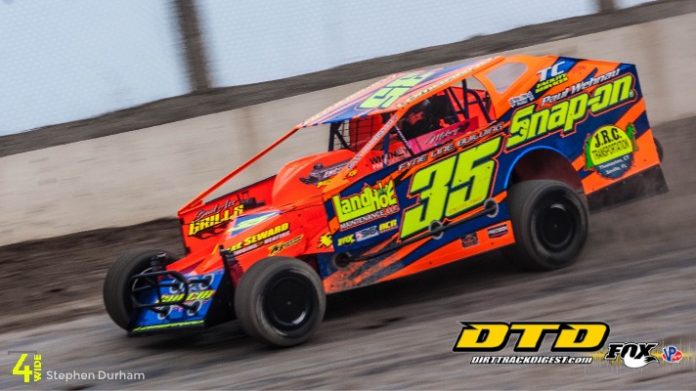 WEST LEBANON, NY  – Lebanon Valley Speedway roared back to life after falling victim to a rainout the week prior.  When the big-block Modifieds hit the track The “Connecticut Yankee” Denny Soltis who started on the pole was quickly challenged by Danbury, CT’s LJ Lombardo.

Over the 30 lap feature Lombardo would be challenged by Ketih Flach , Rob Pitcher and Kyle Armstrong who all took their shots as the race unfolded, but as the race unfolded it was clear that it was Lombardo’s race despite the heated battles around him.

Coming off an opening night that was less than what the Snap- On Tools #35 team hoped for, LJ was pleased with how week 2 unfolded for his team :

“Last night was the exact night we needed to bounce back from opening night. It was so unfortunate that we broke our new Billy The Kid Motor on opening night but Billy did what Billy does and that’s help his customers. He reached out to me and offered me his personal house Motor until my Motor is done being fixed. That’s phenomenal customer service in my eyes and that truly means a ton to me. Knowing that we had some serious heavy hitters starting around us last night that made me really start to think if we had a good enough car. Robbie Albreada and myself sat in the trailer for about 15 minutes throwing ideas back and forth at each other and we came up with the perfect attack. I’m truly blessed to have such an understanding crew that no matter what believes in Robbie and myself to make these last minute calls “even if the feature is already being called to the line”.

Crew Chief Robbie Albreada was also pleased with the victory,


“I cant be more proud of LJ and the whole team.  To win with a motor that we have never ran before and rebound from the bad luck on opening night is just awesome.  LJ’s guys that bust their butts every week in the shop are the ones who deserve the credit.  I do the car setup, but they are the guys who make it happen week in and week out.”

Lombardo also credits his team with the victory,

“This win means a lot to me and my Race Team. It is such a great energy booster to start this season and we truly believe we have a good enough car to get the job done each and every week. I’ve never in my career had a car drive off the corner like the 35 did last night. As long as I kept hitting my marks the car just got faster and faster on long green flag runs. So many people put so much time and effort into this operation during this off season. My Dad Lew Lombardo means the world to me. Without him I’d never have this great opportunity to do what I love. Paul Wehnau from Snap-On Tools has put so much effort into our Race Team this off season and it feels so good to get our first win together. JRC Transportation, LandHoe Maintenance, TC Facility Services, ACR Performance, Dig Race Products, Precision Hydraulic & Oil, Fyne Line Building, Ultimate Restoration LLC, and People’s Choice Mobil. I’d really like to dedicate this win to a great friend of ours who unfortunately passed away this off season Ed Chamberlain, he is so dearly missed by all of us at Lombardo Motorsports. tti set a blistering pace on his way to victory lane in the small-block Modified feature in his new Winchell Stone & Masonry No. 17, a car that will be surely be one to watch throughout the season.