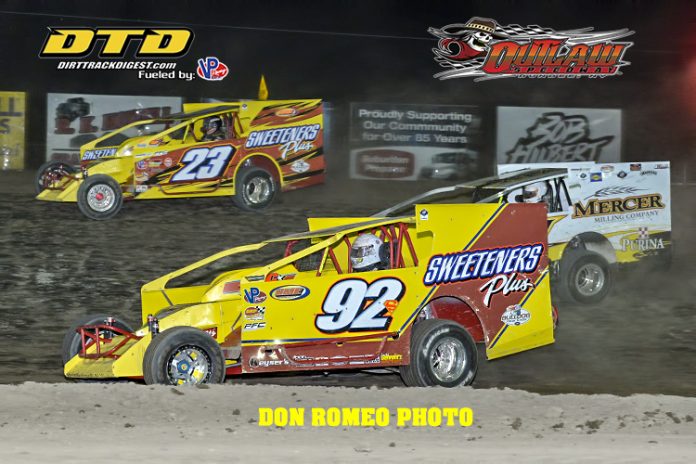 DUNDEE, NY – Outlaw Speedway has hosted two-day programs in the beginning and end of the season, but Friday night was the kickoff of the first two-day Scorpion Security Products Summer Nationals, with regular divisions joined by the 360 Sprint cars for the first night of racing action.  146 cars filled the pit area for Friday night’s program.

The 360 Sprint cars rain a pair of 15-lap ‘A’ features, with the winners of each locking into the front row of Saturday night’s ‘A’ Main.  In the first of the two events, Matt Tanner outdueled Danny Varin and Jason Barney in the opening laps to score the win.  Following Tanner across the line was Jeff Cook, Barney, Varin, and Billy Van Inwegen.  The second race found

Chuck Hebing pulling a crossover move on Steve Poirier on the first lap to pull away for the win.  Jordan Thomas, Poirier, Kelly Hebing, and Darryl Ruggles rounded out the top five.

The Friendly Chrysler Dodge Jeep Ram Outlaw Modified feature had a great battle for the lead between Steve Gray and Kyle Coffey for several laps, but Matt Sheppard came from the 12th starting spot to take the lead from the duo on lap 14 and once out front, Sheppard gapped out by a full straightaway to make a return to Victory Lane.  Kyle Coffey got the best of Gray in the battle for second, with Eric Fisher and Jim LaRock taking fourth and fifth.

In the Crate Sportsman feature, Chris Silvers led the first half of the featue as Karl Comfort and Tommy Collins Jr closed in as the race’s second half started.  Comfort took the lead on a restart, but Collins made the move to get by with four laps to go to take his second win in a row.  Comfort, Silvers, Brent Ayers, and Chris Fisher, who came froom 23rd starting spot, rounded out the top five.

Chad Homan and Brian Knowles ran side by side for the first few laps of the Crate Late Model feature, but Homan ulled away and took the win by almost half a lap at the finish.  Darrin Horton was third.

The Crate Late Model heat was won by Chad Homan.

In the Marion Decker Agency IMCA Modifieds, Rich Michael Jr made the move past Keith Jack Lamphere on lap 8 to take the lead while Lamphere was left to duel with Rodney Morgan, who picked up a ride in Ray McClure’s car after engine troubles sidelined his car after the heat races.  Michael was easily able to pull away for his second win in a row as Morgan took the borrowed ride to a second place fninish.  Keith Jack Lamphere held off Brandon Smith at the line for third with Keith Lamphere just behind them.

In the Street Stock main event, Glenn Whritenour came from the 10th starting spot to take the lead from James Kreidler III on lap 15 but a yellow on lap 19 put the chasers on his rear bumper for a one lap dash.  Whritenour held on for the win as Quinn Sutherland made the move on Jayson Smart for the second spot.  CJ Guererri and Kreidler completed the top five.

Multi-time 4 Cylinder feature winner Adam Austin passed Shawn Gleason for the lead on a lap 7 restart and then fended off challenges from Chris Woodard through several second half restarts to take the victory.  Ray Hyer nipped Shawn Gleason for fourth, followed by Scott Lehman Jr.

Saturday night, July 28th, the Summer Nationals continue with the second half of the 360 Sprint car program, including the

$6,000 to win ‘A’ Feature, plus the Friendly Dodge Chrysler Jeep Ram Modifieds go for a $4,000 to win payday.  The Outlaw Crate Sportsman Series, Street Stocks, IMCA Modified Empire Series, ‘Outlaw’ style 4 Cylinders, and Hobby Stocks will also be on the card.  Racing begins at 6:00 p.m.  For more information, visit www.outlawspeedwayllc.com.