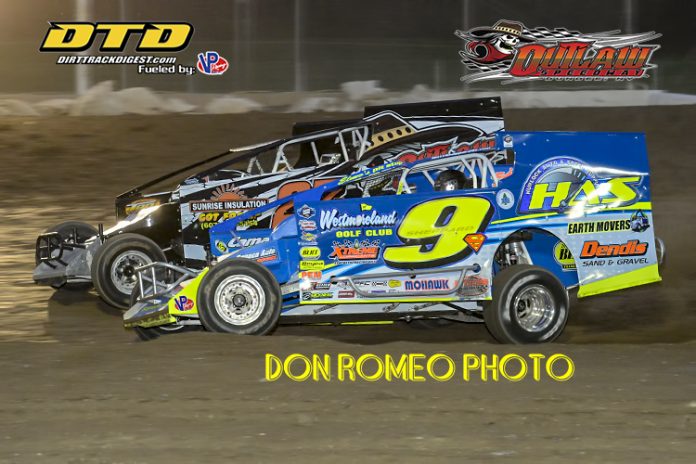 DUNDEE, NY – Matt Sheppard proved once again why he is the dominant force to be reckoned with at any race arena that he competes at in 2019.  Having won his earlier evening heat race, Super Matt made short work of the star studded Friendly Chrysler, Dodge, Jeep, Ram Modified feature event.  Moving to the lead on lap 5 from his third row starting spot, the Seneca Falls native and second generation pilot made quick work of the 30 lap feature affair.  Once out front all eyes were on the battle for second on back as The Doctor, Danny Johnson had his Tyler Siri owned machine dialed in to near perfection, but really had nothing for Sheppard and had to settle for second at the finish.  Hurricane Steve Paine continues to impress after picking up a huge win last month in the Dutch Hoag Memorial make-up by finishing third followed across the line by Boss Man, Tyler Siri with AJ Slideways, Alan Johnson rounding the top five.

The inaugural appearance at Outlaw Speedway on a weekly basis of the Dirtcar Hoosier Tire Sportsman Division found a respectable field take the opening green flag for their feature event.  In a huge upset, Cody Wolfe was able to pick up the big win over perennial champion, Dave Marcuccelli.  Will Sheilds came across the line in third chased there by third generation driver, Alex Payne.  AJ Lloyd rounded the top five.  It is anticipated that in upcoming weeks this popular Hoosier tire shod class will increase in car count numbers.

The Sunrise Insulation American Racer Tire Sportsman Division touted a strong field of some 27 machines in their first appearance in regular season action.

Brian Fish has been a mainstay in the division over the past several seasons at the Yates County oval and on this night he was not to be denied as he powered his way to a popular win on the American Racer Tires.  Pavement transplant, Jimmy Zacharias continues to impress as he finished in the runner up spot followed across the line by, 2018 Track Champ, Karl Comfort with Will Shields and veteran Donnie Lawson completing the top five.

Zacharias, Shields, Marcuccelli, Lincoln, Butler, Peckham and Potrzebowski all saw double duty in the American Racer and Hoosier Tire Sportsman Classes.  Unless geared with two machines it is a challenge for all pit crews involved having to make the necessary tire changes and chassis adjustments.

The Stan’s No Tubes Classy Street Stock Division once again provided the fans with their awesome performance of rubbin’ and racin’ coupled with outstanding driver talent and when the feature event was safely tucked into the record books it was Dylan Cecce of Addison picking up the win.  Cecce once again showed his mastery of the 4/10 of a mile clay oval by topping a stellar field of full fender competitors including the likes of veterans Willy Grant, Gene Sharpsteen, Gene Balmer and CJ Guererri who took the top five honors.

Rich Michael Jr makes the long tow from the western part of New York State several times during the season to compete at Outlaw Speedway in the Marion Decker Insurance IMCA Modified Division and whenever he does show up, he is the odds on favorite to win.  That was the scenario on this night as Michael of Ishua, NY came away with the win and even though the field was a bit limited on numbers it was a top notch field of machinery and drivers.  Following Michael across the line it was Bad Brad Smith, Rodney Morgan, veteran shoe Dick in the Dirt, Rich Karlnoski with Brandon Smith in the MOPAR completing the top five.

20 drivers took the opening green flag in the Mighty 4 Cylinder feature and when it was all said and done with weekly competitor, Joshua Oles picked up a convincing win over Scott Lehman, last year’s champ, Adam Austin, Jeremy Bunn and Bob Doolittle.

Steve Perkins II was the winner of the Winners Circle Deli Bandit feature.

Up next at Outlaw Speedway on May 17, 2019 it will be the return of the Lucas Oil Empire Super Sprints along with a Super 6 Show.

All gate times and admission prices can be found by going to www.facebook.com/OutlawSpeedway/.

There’s always plenty of room for free camping and kids under 12 are admitted free.