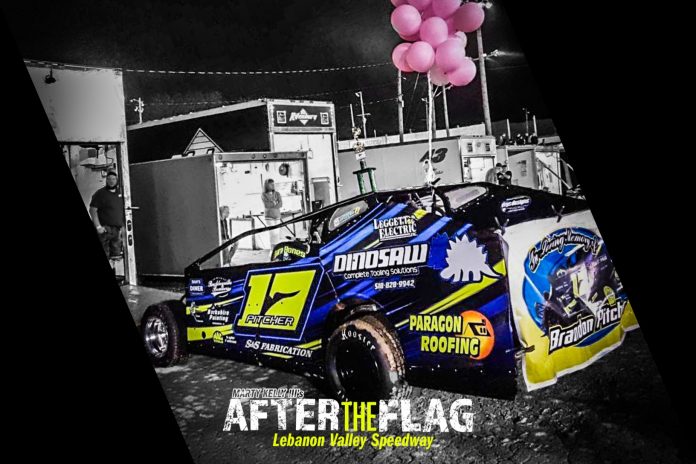 Kenny Tremont, Jr. of West Sand Lake, NY, inherited the lead on lap 13 from Brian Berger and cruised to victory on “Legends of the Valley” night on the high banks.

John Ruchel and Ricky Davis led the 21 car field to green for the 30 lap A-Verdi Storage and DMC Driveshafts modified feature, but it didn’t take long for Kyle Armstong, the fourth place starter, to follow his comeback trail to the point.  Armstong returned to the speedway this week in his backup car after a harrowing crash last week that saw his Newtown Pools number 11A car smack the turn 4 wall, barrel roll 3 times and burst into flames following a stuck throttle.

Chief starter Rodney Rescott threw the caution flag for the first time on lap two when Ricky Davis hit the turn two wall.
On the restart, Armstrong was out to the lead again with Brian Berger, Peter Britten, JR Hefffner and Tremont in tow. Berger sported a special purple #606 color scheme in a tribute to his uncle, Bruce on “Legends of the Valley” night.  Berger had that car digging on the bottom lane and ran side by side with Armstrong for the next five laps until the yellow flew again on lap seven for an incident in the west end involving Andy Bachetti, Marc Johnson and Eddie Marshall.
Five laps after the restart, Berger rocketed to the top spot, just before another yellow for Matt Pupello slowing on the front stretch. Under the caution, Berger hit the expiration date on the power plant under the hood, handing the lead to 13th place starter, Tremont. From there, “The Sand Lake Slingshot” handily led all remaining 17 laps to score the win over Peter Britten, JR Heffner, Kyle Armstrong and Keith Flach.
Tremont was all smiles following the victory which extended his points lead.
“Obviously happy with that,” Tremont said of a fresh Bedell engine in his S&S Asphalt Paving Bicknell Chassis. Driver #115 noted the racey track conditions and acknowledged all the “old timers” present for the special night that showcased the speedway’s past.
The small block race was 17 laps and paid $1700 to win in memory of the late Brandon Pitcher.  Brian Sanstedt held off JR Heffner for all 17 circuits to pull off the win. He later presented the trophy and flag to the Pitcher Family, who displayed Brandon’s car with pink balloons revealing the gender of Brandon’s baby expected this winter by his fiance, Brittany.
Many people wore blue Pitcher Racing shirts with Brandon’s photo on the back, the shirts were made special for Saturday and sold out before racing even began along with memorial decals which would be found on most every car in the pits.
“Brandon and I always ran side by side,” recalled Sanstedt. “He’s in our hearts, I miss having him come over to the trailer and talking with him.”
Rick Dempsey topped the pro stock field to win the “Old Buzzard 30” Jim Langenback memorial event. Nick Arnold and Jason Meltz shared the podium.
Ed Hatch and John Devine split the pure stock features.