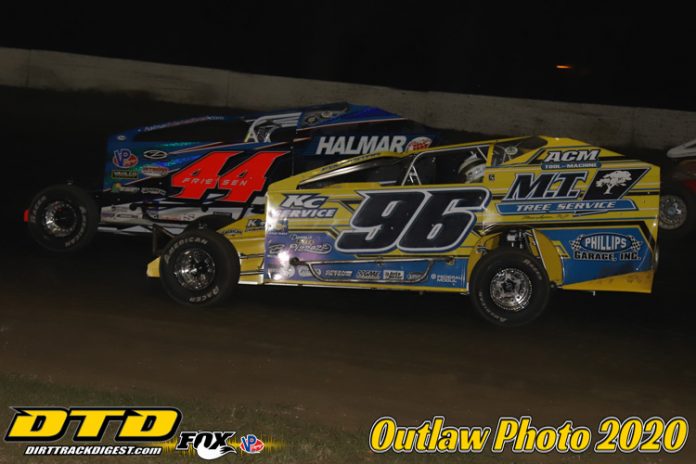 Well, the ‘Sunshine Swing’ is over and it was a grueling, tiring week, but it was a very interesting and fun event to cover.

Erick Rudolph might be considered a surprise winner as he came home with the $10,000 win while Stewart Friesen captured the point title.

The 50-lap finale might have proven to be well over an hour long, but it supplied drama with “should I change tires or shouldn’t I” strategy (for some that worked and for some came up just short) and Modified racing in February.

Rudolph went from fourth to first to take the lead on the 41st lap.

He noted that his week was interesting as “I pulled in the first feature, finished fifth the second night and in the finale I thought we could be top five, but not easily. As it played out the race went our way. I think we raced smart. I was concerned with tires, but as it turned out we had plenty left. I guess you could call this a high IQ race. We got to the top five quickly and they were all running about the same speed. I closed up on them or maybe they came back to me. I bid my time and wanted to save my stuff. I ran like a scared rabbit, but it paid off.”

Erick continued, “We had a Bob Brunneau big-block in this and we were probably one of the few drivers here to run with a big-block.”

Continuing he said, “We are down here for a good time and all my family is here. We get to spend time together and get away from the Western New York winters. We’ve been fishing and it’s been really nice. I think this will give me some momentum and confidence going into Volusia.”

Stewart Friesen captured the title and earned an extra $500 and rallied for the runner up spot after two pit stops.

Friesen explained, “We went in a couple of times. Once for a set of rear tires and the second for a right front. We survived some wild restarts coming back up through, but to win the championship is really cool. Two wins and a second isn’t all that bad. We gambled a bit, but we’ll take it.”

Third place at the checkered was Mike Gular who had the lead in the late stages.

The disappointed driver said, “I think that red flag really did me in. It cooked the tires and it just oversteered in the corners. It was a good run for the week we have had. Third really sucks, but it is so much better than the past two nights.”

Billy Pauch Jr. came home fourth and even though he appeared disappointed he reflected on his run.

He said, “I had watched videos of this place and knew it took rubber. We pitted for two rear tires and I really think it played in my favor. Coming back up through the restarts were a bit shady, but we were coming through in a hurry. This week we changed motors and hung in their with the best of them. We’ll get back to it in three or four weeks at Georgetown.”

Matt Sheppard was an example of consistency, but he would rather have wins.

Fifth place Sheppard said, “I couldn’t get the car to turn at all. It was never better or never worse all week long. I had a shot to win,but I actually had too good of a restart (as he chased down Gular). I needed Gular to beat me on a restart, but I got below the rubber and there was just no way I could get him.””

Continuing, Matt said, “I wanted to let the 2g go and slide in there and take a shot. I had to tell myself to let off and that is difficult for a race driver to do. I put myself in a bad spot.”