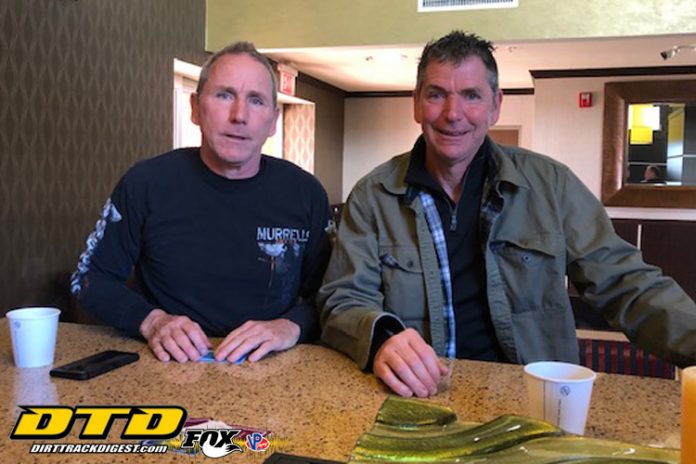 We spent some of our first day at All-Tech Raceway wondering what weather was coming for the track that night and it became clear during warm-ups that Mother Nature didn’t have racing in mind, but some very serious weather, heavy rain, winds and tornado warnings. It was enough to cancel the show and set up a double header for Friday night, the second night of the Sunshine Swing.

On Friday when the drivers gathered for their meeting before the show, Brett Deyo explained that he had never tried a double show before but thanks to track promoter, Wendall Durrance they did it and gave the drivers that towed all the way to Florida the three shows they were planning on with some big money payouts. DirtTrackDigest.TV broadcast all three nights of action plus driver interviews and believe us it takes a lot of planning and work to get that all together for those who subscribed. The behind the scenes crew of DirtTrackDigest.TV, Mel and Matt Thomas, Art Rorick, Gary Silverman, and Brad Ovens were busy setting up when we arrived on Friday but were still kind enough to give us a tour of their new production trailer they’ve been working on for the past few months. They all have full time jobs so much had to be done after hours. According to Mel, Art Rorick did much of the reconfiguring of the trailer to fit their needs and it took Matt and Art, 80 hours per week for six weeks to complete. Mel Thomas is the senior member of the team and well known for his awarding winning racing video productions. Mel said, “I started recording at Weedsport with Glenn.” Along the way, Mel brought his sons in making it a family affair. “This year, 2020, will be the first time a Thomas will not be shooting video at Weedsport.”

They will be busy on the road for DirtTrackDigest.TV, shooting weekly events at Fonda and following the STSS and more. Mel was born in Saranac Lake, N.Y., where he was bitten by the racing bug. Life took him into the Navy where he worked in communications in Vietnam during the war. After leaving the Navy he worked in several different industries where he provided his expertise in communications and did many training videos. If you tuned into DirtTrackDigest.TV for the Sunshine Swing keep in mind all the time and effort it takes to bring you an event like that. We were there so didn’t need to buy the service but we do believe it would be well worth the price.

The Sunshine Swing was full of sunshine and checkered flags for the Ballestero brothers and they loved the double header idea because they both took home a win in each of the 602 Crate Sportsman events on Friday night; $1250 plus bonus money. When we saw them at breakfast at our hotel the next morning they were still smiling and when we spoke with them at the track on Saturday, again, they were both still smiling. Michael won the first 25-lap event (from Thursday) and Tony won the Friday night 25-lap feature.

The Ballestero brothers are no strangers to Capital District racing even though they did take off about 10 years, returning last season. Before their 10-year hiatus the brothers enjoyed success at Albany-Saratoga, Fonda and Devil’s Bowl in Vermont. Michael is the all time winner in the Sportsman class at Albany-Saratoga with 32 wins and was track champion in 1998, 2001 and 2002. He has 14 wins at Fonda and four at Devil’s Bowl. Tony recorded 18 wins at Malta and is tied for sixth on the all time win list. He has two wins at Devil’s Bowl.

The Ballestero’s return to racing last season came about when Tony began reflecting on life and the number of friends that were no longer around. He bought a new Bicknell chassis and a Crate motor from Bernie Companion and raced at Albany-Saratoga. When he planned a trip to Ireland with his daughter he asked brother, Michael if he would drive the car for one night. The fix was in, and Michael was hooked once again. He chassis choice was a DKM and that turned out to be a good decision for him. After his win at All-Tech on Friday, Michael blew a motor and didn’t make it to the second feature. By Saturday Michael was back with an extra motor but both he and Tony didn’t have the previous night’s luck. We thank both Andy Hickok and Justin St. Louis for the Ballestero record stats. We can’t be in two places at once, so we didn’t make it to North Florida Speedway for the GRIT Series for 602 Crate Sportsman events, but a couple Capital District racers chose to take their talents there. Derrick McGrew, Jr., and Andrew Buff both raced all three nights of the series with Buff winning the first night and McGrew in fourth. Night two, McGrew, Jr., was third, Buff fourth; night three, Buff finished second and McGrew, sixth. Buff finished second overall and McGrew, fourth.

We missed the North Turn Restaurant beach parade on Saturday because we were in Lake City but on Monday, we were fortunate to have the Living Legends of Auto Racing beach parade pass right by our hotel on their way to the beach. Also on Monday we attended the annual Mark Krosky, Florida get together at the Sunrise Beach Club, once again, great food, friends and conversations. Our week is full this week so stay turned for next week’s recap.