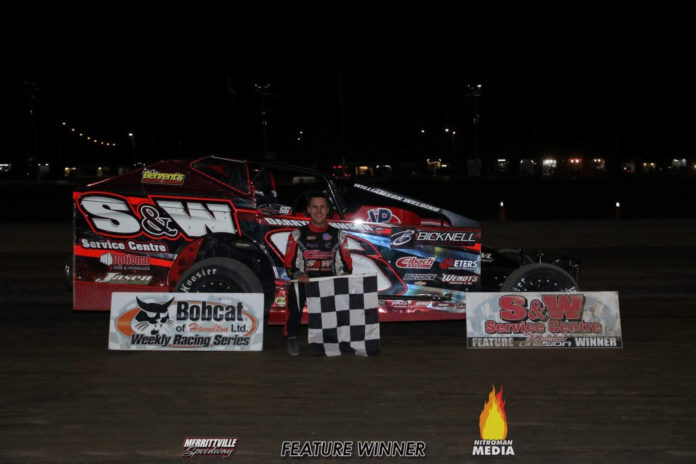 Mat Williamson started on the pole and lead every single lap in the 35-lap feature in the S&W Service Centre 358 Modifieds. Williamson stretched out to an early lead over Pete Bicknell who at one point was eating into the lead. Bicknell was never able to get closer than nine-tenths of a second. The race ran caution-free and Williamson notched another victory at his home track with Bicknell finishing in the runner-up position. Reigning track champion Gary Lindberg finished in third and was followed to the line by Scott and Austin Wood.

The 360 Sprints saw action at Merrittville Speedway for the 2nd night in a row. Tonight’s feature started with Chris Steele from St. Catharine’s, Ontario on pole with Brantford, Ontario’s Mitch Brown on the outside of the front row. Steele would control much of the race, lapping almost half the field. However, Steele would face a challenge late from Jim Huppunen. As the two sliced and diced through lap traffic, it came down to the last corner where Huppunen made a bold move on the outside to pull alongside Steele in turns three and four. Off turn four, Steele used the bottom lane to clear Huppunen and take the checkers. Mitch Brown, Cory Turner, and Ryan Turner would complete the top five finishers respectively.

Steve Shaw and Kyle Wert lead a 22-car field of Hoosier Stocks to green. Shaw took the lead early while Chris Hale, Mike Thorne, Ken Sargent and Rob Murray raced hard in the top 5. Dave Bailey, who started 18th after not finishing his heat race, battled his way up into the top 5, taking advantage of multiple yellow flags. Murray took the lead in the second half of the race and Bailey got as high as second. A late caution set up another classic battle between Murray and Bailey at Merrittville, but on the restart, Murray would drive away from the field to win. Chris Hale crossed the line in second, with Steve Shaw, Ken Sargent, and Dave Bailey completing the top five.

In Rona Doidge Building Centres Modified Lites action, Josh Sliter and Brent Begolo started from the front row. Sean Iftody spun after starting 5th, which jumbled up the field. Jeffery May who started alongside Iftody quickly worked his way up through the field and into the lead. May captured the win, while Tyler Winger got by Begolo late to finish 2nd. Begolo would settle for 3rd while RJ Pietz and Josh Sliter rounded out the top 5.

Lastly, Fabio Olivieri survived a wreck-filled Central Fabricating/Glo & Go Tanning 4 Cylinder feature. The race saw many of the top contenders involved in incidents including Austyn Werstroh who while battling for the lead, started a crash that involved 6 other cars and destroyed Werstroh’s 71 ride. Alex Riley and Leroy Buscomb also came together while battling for the lead, and another multi-car incident occurred when Dylan Llord and Kenny Hair came together while battling in the top 3. When the wrecking finally stopped, it was Fabio Olivieri taking the win over Riley, Hair, Buscomb and Matthew Moore.

Special thanks to Hoosier Tire Canada for their top five bonus program, giving extra bonus money to the top five Hoosier Stocks with Hoosier Racing Tires on all four wheels.

GForceTV will have the action from tonight on the channel Monday night, September 21st at 7 pm. After Monday, fans can watch it anytime along with all the races from Merrittville in 2020 just by heading to www.gforcetv.net

Fans can register for the lottery draw for admission tickets to the racing program by following the directions on the Merrittville Speedway Facebook and Twitter page. Fans can email donspiece.merrittvillespeedway@gmail.com between 5-9 pm on MONDAY, September 21st for the September 26 program. The emails must include names, phone numbers, and hometowns for each person in your group.

Did Not Start: Donny Lampman

Did Not Start: Aiden Maynard 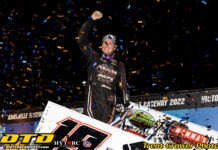