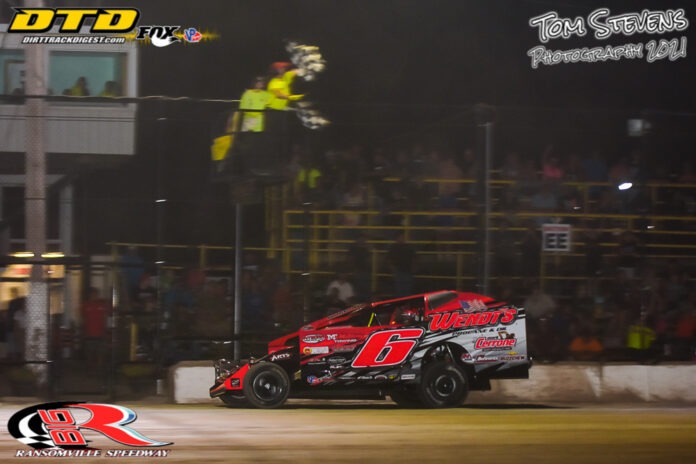 RANSOMVILLE, NY –  St. Catharines, Ontario’s Mat Williamson was victorious in the $2,000 to win “Super Fan” Joseph Scholtisek special for the Krown Undercoating Modifieds at the Ransomville Speedway Friday night. The victory was his fourth of the season. Dante Mancuso from Batavia, NY took home the checkered flag in the $500 to win Rick Scholtisek Memorial for the Sunflowers of Sanborn Mini Stocks for his fifth win of the season. Reigning Investor’s Service Sportsman track champion Brett Senek from Ransomville, NY picked up his second win of the season. Mike Kramarz from Niagara Falls, NY won his first KiPo Chevrolet Street Stock feature of the season. Jake Bansmer from East Aurora, NY won his fourth Kevin’s Carpet Cleaning Novice Sportsman feature of the season.

Erick Rudolph and Mat Williamson were on the front row for the “Super Fan” Joseph Scholtisek special for the Krown Undercoating Modifieds and it was Williamson taking the lead as Jonathan Reid, Robbie Johnston, and Rick Richner raced inside the top five early on. Ryan Susice would pass Greg Martin to take over sixth and would go after Richner for fifth place on lap four, as Williamson and Rudolph would pull away from the field. Susice would take over fifth place from Richner and would start to go after Johnston for fourth place at the races’ 1/3rd mark. Williamson and Rudolph would pull away from the field as Susice would look to the outside of Johnston and would complete the pass on lap 17 to take over fourth place. Rudolph would reel in Williamson, but it was too late as Williamson drove to his fourth win of the season.

The Rick Scholtisek Memorial for the Sunflowers of Sanborn Mini Stocks was brought to the front row by Dante Mancuso and Curtis Rung but it was calamity behind them as Brian Melcher hit the front stretch wall and Chuck Hughes rolled into the moat and landed on his side. All drivers were alright and climbed out of their cars under their own power. Dante Mancuso would take the lead from the drop of the green flag over Rung and Nick Tarnowski. Don Whiteside would start deep in the field and would move into fourth place and would challenge Tarnowski for third place, as Mancuso and Rung pulled away from the field. Rung would challenge Mancuso for the lead in the late going of the 20-lap feature, but it was Mancuso continuing to show the way. Mancuso would hold off Rung to claim his fifth win of the season. Rung was disqualified following post-race inspection.

Brett Senek and Zach George were on the front row for the Investor’s Service Sportsman feature event, with Senek showing the way over George, Scott Kerwin, Austin Susice, and Noah Walker racing inside the top five early on. George would look underneath Senek for the lead, however, the multi-time and reigning track champion was able to keep the lead. The lead trio of Senek, George, and Kerwin would pull away from the field, as Derek Wagner would close in on Austin Susice for fourth place. The battle for second heated up on lap 11 as Kerwin went to the outside and on lap 12, would complete the pass on Zach George to take over second place. Kerwin would slowly begin to close the gap on Senek as the leader encountered lap traffic. Senek would hold off Kerwin to pick up the win, his second of the season.

Mike Kramarz and Mark Loveland brought the KiPo Chevrolet Street Stocks to the green flag for their 20-lap feature event, and it was Kramarz showing the way. Anthony Guthrie would take over second from Loveland as Pat Dell and Jaren Israel raced inside the top four. Dell and Israel would battle with Guthrie for second as Pete Stefanski entered the top five after passing Loveland on lap 10. Israel and Dell would move into second and third at the halfway mark and the duo would reel in race leader Kramarz in the late going. Kramarz would drive off to his first career Street Stock victory.

Robert Henning and Brandon Close were on the front row for the Kevin’s Carpet Cleaning Novice Sportsman feature event, and it was Henning jumping into the lead. Qualifying heat race winner Jake Bansmer quickly took over the runner-up position and would go after Henning, with Close racing in third place. Close would hit the turn three wall to bring out the caution on lap five. Henning and Bansmer would bring the field back to the green flag with Henning continuing to show the way. Bansmer would take over the lead with six laps remaining and would pull away to pick up his fourth win of the season.

Ransomville is back in action for a doubleheader weekend on Friday, August 13, and Saturday, August 14. On Friday, August 13, we will be honoring and remembering Sean Letts and John Susice. The Sean Letts Memorial will be round three of the Western Region for the Investors Service Sportsman Super DIRTcar Series and the John Susice Memorial will take place for the KiPo Chevrolet Street Stocks. The Krown Undercoating Modifieds, Sunflowers of Sanborn Mini Stocks and the Kevin’s Carpet Cleaning Novice Sportsman will all be on the card as well as the rescheduled Autograph Night. Pit gates will open at 5:00 pm, grandstands open at 6:00 pm, and racing will get underway at 7:15 pm. The complete racing program will be streamed live on www.dirttrackdigest.tv The very next day, the Monster Truck Racing League will be taking over the facility for an amazing show! Contact the Monster Truck Racing League on social media regarding tickets and other information.

Did Not Start: Sam Hoxie