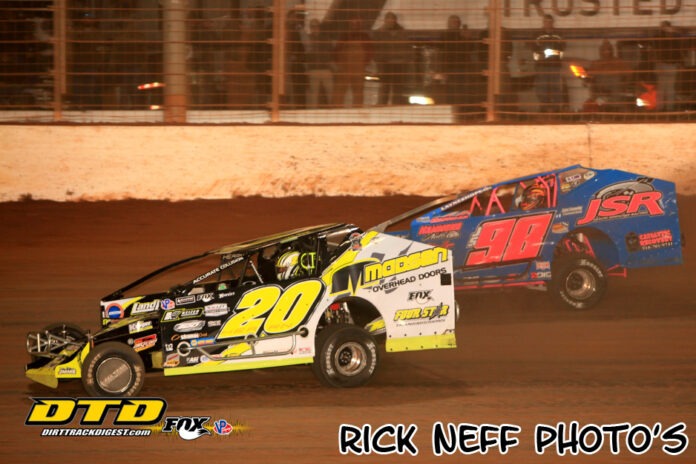 For Brett Hearn, and racing fans in general, Saturday will not soon be forgotten as he led the entire 30-laps for his 920th feature win and 450th DIRTcar sanctioned victory. It was the 129th Super DIRTcar Series win of his career.

It was Hearn’s sixth career win at The Dirt Track at Charlotte, the most all-time.  His first win iin Charlotte came way back on April 7, 2001, the first time the series visited the facility.

Hearn, at 63-years-old, bested a 37 car field on Saturday night after Brandon Walters, Danny Johnson and Kevin Root did not return to competition after Friday night.


Rocky Warner was closing in on Hearn but on the 13th lap the rear axle broke and also took out the rear end.  He’ll now head to Louisiana hoping for better results with the Jason Simmons owned teamed.

Larry Wight had pitted, returned to the track at the tail end of the field and as the field gets between turns three and four Duane Howard had the back-end of his car come around. The car slid up the track and collected Alex Payne along with Tim Sears Jr. before Larry, running the high-side, ran into the blockade and bent the front axle of his No. 99L.

Max McLaughlin started back in 30th, drove to fifth using the bottom lane and had a genuine chance for a top three when his right rear tire gave out.

Billy Decker and Pat Ward ended their runs with Gypsum Racing as decker came home tenth and Ward finish 16th on the final night of the 2021 season.

Modified heats provided some of the norm and a couple of surprises. Jimmy Phelps turned in quick time and ran away with the third heat while Mat Williamson, Peter Britten and Brett Hearn chalked up other heat wins.

Matt Sheppard and Tim Fuller had a heated fight for second with Fuller getting under on the final lap between one and two while the No 9s recovered off of turn two.

The first five starting cars finished all qualified in the first with Hearn being followed by Larry Wight, Justin Haers, Ronnie Davis III and Jack Lehner.

In the second it was similar to the first with the first five all getting to the main. Behind Britten were Demetrios Drellos, Alex Yankowski, Billy Decker and Mike Gular.

Drellos felt his car was the best he’s ever had here on Friday night and couldn’t get Wight for runner-up and the draw on opening night, but he made the draw this time.

Jeremiah Shingledecker had the third quickest time overall in the time trials, but got shuffled back on the start of heat three. Phelps ran away while Sheppard was second, Fuller third, Mike Mahaney fourth and Jordan McCreadie fifth

The greatest shuffling of the night came in heat four as Mat Williamson dominated, but on a restart after Jeff Taylor had stalled out in turn four, Tim McCreadie was passed by Rocky Warner contesting second.

As the race wore on there were some nail biting racing in the field. At the end Williamson, Warner and McCreadie were one-two-three. Sixth starting Pat Ward was fourth and seventh starting Duane Howard fifth. Howard was impressive early on Friday night, but fell back in the later stages of the main.

McLaughlin suffered a left rear flat dropping him out of the Last Chance Showdown.  He used a provisional to make the feature.

Chris Hile started near the rear of the field, but was awarded a provisional.

From the consi and provisionals were Pierson, Sears, McGannon, Shingledecker, Rudolph, Olden Dwyer (who was much improved over the night before), Michael Trautschold, Alex Payne, Rich Scagliotta, McLaughlin and Chris Hile.

Among the name drivers in the B were Billy Pauch Jr., Mike Trautschold, Shingledecker, Sears, Hile, Rudolph, McLaughlin along with seven others.  Pauch decided to not run the Last Chance Showdown and went home.  He ran Bridgeport on Sunday night and finished in the top five.

Thirty-one cars were set to take the green for the season finale.

Sprint cars had their moments in the prelims.

Paulie Cologiovanni finished fifth in his heat to gain a berth in the season finale. Despite smoking heavily, he held on to get in. Chasing him across the line was Donny Schatz.

Emotions had to be high as Jac Haudenschild ran the final WoO heat of his career in the third qualifier of the day. To fans delight, he came home third and earned a berth in the final feature of 2021 and the final one of his career.

Kyle Reinhardt started tenth in the final heat and put on a sensational run coming home in fourth. In one felled swoop he got Kraig Kinser and Jason Sides to go from sixth to fourth.

The B0Main was absolutely loaded as it appeared to be a feature line-up. Lyndon Jeffrey, Sheldon Haudenschild, Shane Stewart and Brian Brown got the four qualifying spots. Brown beat out Schatz for the final qualifying position.

Behind were Jacob Allen, Kasey Kahne, Sam Hafertepe Jr., Greg Wilson, Danny Dietrich, and Cole Macedo as 23 cars were scheduled to start and there were 21 taking the green.

Macedo did a 360 and kept going keeping the green out over the track.

Schatz, Kahne and Wayne Johnson were the provisionals for the 27 car feature field.

Daytime time-trials are interesting as though the cream rises to the top both days there are several drives who did well on Friday and just the reverse on Saturday in the sunlight.

Spencer Bayston was fastest in his group, came out and timed 10th on his first lap and ended up fifth with the second.

Saturday was a cold day with a strong winds. It definitely was a day for only die hard race fans.

The midway area was the biggest in recent years with several teams having trailers selling merchandise. The biggest crowds were around Jac Haudenschild, Scott Bloomquist and the ASI trailer with Lucas Oil Champion Tim McCreadie merchandise.

Bill did find a $3 World Finals t-shirt sale, he’s hoping it won’t give me a rash. (Update: he wore it home on the plane and turned out okay)

NOS Energy Drinks was giving out can after can of their product. Choice Original or Mango. Made the choice easier for these writers to.

There was a lot of talk about food prices.  For chicken tenders, fries and a Coke it cost $17.

The throwbacks schemes of Danny Dietrich in the Weikert 29 and Justin Peck’s 73 salute to Kramer Williamson were eye catching in the Sprint pits.

Lynton Jeffrey in the Glenn Styres No. 0 was a surprise entrant.

Sixteen-year-old Gray Ledbetter made her debut as a team mate of Shane Stewart. She took a wild ride between three and four on Friday night. The left rear wheel ended up in the front stretch. Not sure if tire came off before or after accident.  She missed the show on Saturday night as well.

Jac Haudenschild’s career ended with a flip in the feature event.  His son Sheldon had issue which collected Jac and a host of other cars.  Jac got upside down who collect Colagiovanni, who also got over on his lid.  No one was hurt in the crash.

Brock Zearfoss finished second in the A-Main.  It was his first top-five of the season with the World of Outlaws.

Schatz drove his ass off to finish third.  He came from the 25th starting position.  He ran the bottom throughout the race and made tracks all race long.

All of the features were cut short due to concerns about tire wear.  The Sprint Cars ran 25-laps, the Super DIRTcar Series Modfieds ran 30 while the World of Outlaw Late Models feature was cut to 40-laps.

Logan Schuchart had to be heartbroken after the weekend.  The Hanover, Pa., driver led both features only to get right rear flats.  On Saturday night he came up just four laps shy of winning the main-event.  He cut a tire in turns one and two which caused him the slam the wall to end his night.

Mike Mallett contributed to this story. 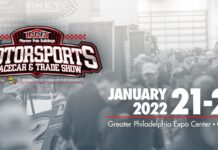 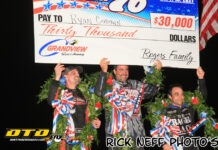 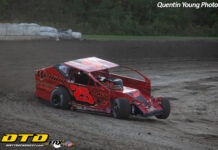 Rudolph Finally Wins At Mohawk In The DIRTcar 358 Modified Series