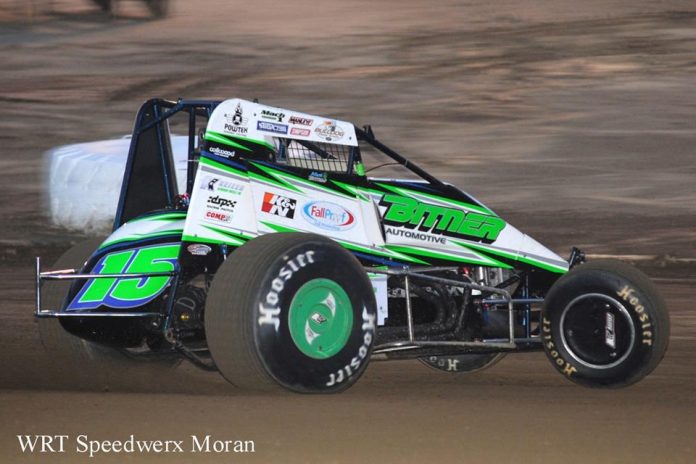 MINERSVILLE, PA – Mr. Twister Mark Bitner used a lap 2 slide job to propel his Bitner Automotive #15 to the $2,000 victory on Friday night’s Capitol Renegade Wingless United Racing Club event. This was the first wingless event for the United Racing Club since 1996 when the 360 club ran at Grandview Speedway.

A field of 15 cars entered the pits on Friday night for the 25-lap event paying $2,000 to win and two heat races were needed to set the stage for the nightly feature. Heat race wins went to Jimmy Stitzel Third Rail Bar and Restaurant #4 and the #21 of New York native Carmen Perigo.

Front row starters Perigo and Kevin Darling aboard the Ken Darling & Sons Sewer Contractors, Garrison Homes, Anderson Performance #9D lead the field of 15 cars to the green flag. The features only caution was thrown before the completion of lap #1 as a spinning Scott Flammer came to a stop in turn 1.

On the restart the crowd saw Kevin Darling jump out front with Bitner closely in tow. It didn’t take Bitner long before he made his move going into turn 3 on the 2nd lap. Bitner throw the #15 car sideways and low as he executed a perfect slide job past the 9D of Darling.

By lap 8, Bitner was navigating some lapped traffic with now the 1B of Joey Biasi running closely behind. Biasi continued to reel Bitner in and by lap 11, the 1B was just off the bumper of the leader. Just 3 laps later, saw the 21 of Carmen Perigo enter the picture and Carmen began pressing the 1B for the runner up position. With 7 laps to go, Perigo tried an outside move coming off turn 2, but Biasi shut the door going down the backstretch. With 5 to go, the 15 of Bitner was long gone benefiting of heavy lapped traffic that the 21 of Perigo and 1B of Biasi were having to deal with. With Bitner on cruise control, the 21 of Perigo finally got by the 1B of Biasi but Bitner was too far gone and cruised to his first URC win of 2017.


Nightly Tidbits: Kevin Darling was making his debut in a wingless sprint car. Curt Michael made his first appearance in a wingless car since 1996 (His Rookie Year in URC).

Lelands.com could be seen on the #74 of JR Berry, in addition Mike Heffner was in Berry’s pit area all night long. Former ARDC Champion Steven Drevicki was on hand, Steven experience a flat tire in a 1st lap contact during his heat race and started shotgun on the field. Drevicki finished in the 6th position.