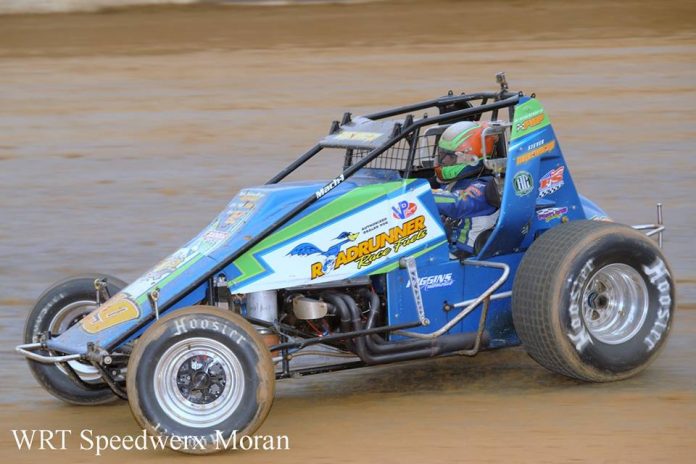 Steven Drevicki picked up his first Capitol Renegade United Racing Club win and his first win in a 360-sprint car. The multi time ARDC champion made the jump to a full-sized sprint car last year stepping into the 358 division but recently the team acquired a 360 motor so the team could run with the Capitol Renegade United Racing Club in both the winged and wingless division.

While Drevicki has taken some time to adjust to the wing on the car, Drevicki looked at home in the wingless car on Sunday night at the Path Valley Speedway. Drevicki has logged many laps around the small bull ring in a midget and used that knowledge to anticipate how the track out change for the feature event. With 25 wingless cars signed into the pit area for the nights racing action, 3 heat races were used to determine the feature line up. Heat races were won by Bill Unglert, Eric Jennings and Chandler Leiby.

The duo of Curt Michael aboard the Bill Gallagher owned GEI Enterprises, Valley Forge Inc 5G and Eric Jennings aboard the NPS Northeast Paving & Sealcoat, Superior Remodeling #14 lead the field of 24 strong to the green flag. Michael jumped out to the lead and by lap 4 lead over Chandler Leiby, Eric Jennings, Steven Drevicki and Chris Allen. It only took Drevicki 11 laps before the 19 was shown in P1 but Drevicki was being pressured by the 119 of Chandler Leiby, while Michael slipped to 3rd and Jennings was running 4th. By lap 25 Drevicki continued to strengthen his lead while Leiby, Michael, Jennings and Thomas Radivoy were all involved in an intense battle for positions 2 through 5. A lap 25 caution involving the 78 of Dale Schweikart, 131 Bobby Sandt, Jr. and the 7 of Trey Hivner brought the 119 of Leiby to the rear bumper of the 19 of Drevicki. Under caution you could see the right rear of Leiby’s going down and on lap 27 while the caution was being waived for a spin in turns 3-4, the 119 headed to the pits with a flat right rear.

On the restart the 19 of Drevicki drove away from the field again and by lap 30 Drevicki was clearly in command while the 5G of Michael, 9D of Kevin Darling, 8 of Kyle Lick and 14 of Jennings were all battling hard for position behind the 19 car. Drevicki lead the final 24 laps earning his first URC win along with the $2,000 top prize. Following Drevicki to the stripe were the 5G of Curt Michael, 9D of Kevin Darling, 14 of Eric Jennings and the 8 of Kyle Lick.