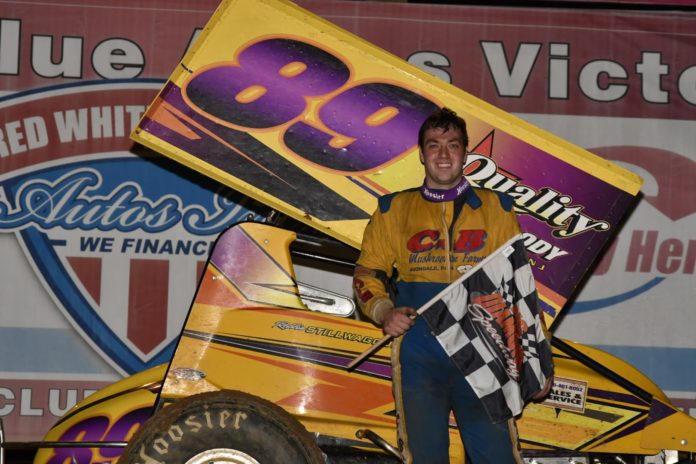 MINERSVILLE, PA – Robbie Stillwaggon picks up right where he left off in 2019, with the Fred Kennedy owned no. 89 in victory lane for the25-lap United Racing Club 2020 season opener at Big Diamond Speedway on Friday, June 19. Stillwaggon led wire to wire, holding off 10-time champion Curt Michael on the road to his 14th URC victory.

Twenty-six cars showed up to race on what initial looked like a questionable forecast but turned into a beautiful night for racing. This race marked the first race of the 2020 season, as COVID-19 has canceled all shows scheduled shows from April-June 19. Getting into the action from Friday night, Adam Carberry went quick time in hotlaps turning a lap time of 14.333, but Tyler Ross would top that time in his heat race laying down a 14.286 capturing the quick time of the night. The heat races were full of action including a hard crash and flip in heat 2 by Jake Hummel – all drivers from that incident walked away under their own power.

After the redraw, Curt Michael would lead the field to the green with Stillwaggon to his outside. Twenty-two cars took the green as Stillwaggon took the lead coming off of turn two and pulled away from Michael, Dallas Schott, and Troy Betts. Stillwaggon had just started to hit lapped traffic when the caution waved for two cars in turn 3. On the restart, Stillwaggon chose the outside, rocketing around Michael and putting some distance between himself and the racers behind him. Many other battles were taking place throughout the field, including Anthony Macri charging through the field after early contact. Macri made a last minute decision to race with the United Racing Club after his initial plans to race a 410 at William’s Grove Speedway succumbed to mother nature.

A few late race cautions, one with 2 to go, and one with 1 to go, tested Stillwaggon and gave Michael the opportunity to capitalize. Michael got the jump on one of the final restarts, passing Stillwaggon in turns 1 and 2, only to have it called back as the leader must start the race. “Curt is one of the best,” Stillwaggon said, “and the car was going away at the end, I was looking to find a good line in 1 and 2 and hoped we stayed ahead of him.” However, the car seemed to hold on as Stillwaggon chose the top side for the final two restarts and went untouched to score the win on opening night in 2020, the 14th win of his URC career.

“It was nice being somewhere that felt normal for a change,” Robbie said in victory lane as he thanked the fans for coming out to support the show, “it doesn’t really feel like the first race of the season.” After Robbie and his wife, Danielle welcomed their first child last September he had said he didn’t know what his 2020 plans were, now, the 2012 URC Champion says “we will take it one day at a time. We always have the car ready to go and I am thankful enough to have a great crew guy in Mikey who understands and is always willing to go.” Robbie would like to thank his dad, mom, wife Danielle and his daughter Riley, as well as his Uncle Fred, Mikey, Dilhole Dad, and brother Ryan for helping him get into victory lane.

The KSE hard charger for Friday night went to Joe Kata who started from the 19th position and worked his way to an eleventh-place finish. Dallas Schott, Troy Betts, and Brian Carber were the winners of the three heat races.

The United Racing Club returns to action for night two of the double header opening weekend on Saturday, June 20, 2020 at Delaware International Speedway in Delmar, DE. Last year, Ed Aikin scored a win at the only race at the Delaware facility in 2019. Gates open at 5 p.m. with hotlaps beginning at 6:45 p.m. 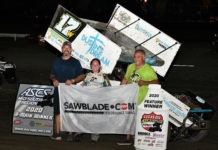 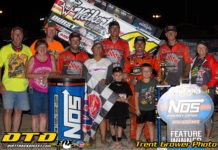 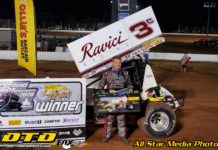