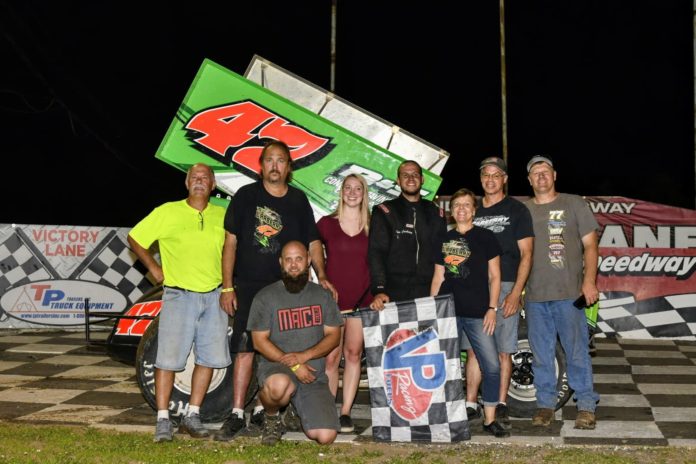 The United Racing Club saw its highest car count of the season with 30 cars all making the trip to Grandview to compete for the chance at winning $2,000. Many states were represented in the field as other states track closures are bringing more cars to the traveling series. As hot-laps completed, Josh Weller of Mertztown, PA topped the speed charts at his home track. The heat races would go off without a hitch with Davie Franek, Matt Tanner, and Troy Betts all cruising to victory.

During the redraw, the pole position was left for Weller who was the last driver to draw, with Derek Locke to his outside. Carberry had a large hill to climb as he would be starting from the eighth position. As the green flag dropped, Weller shot out to the lead however, the green was short lived as on lap 1, Dallas Schott spun and collected Jason Cherry who ended up on his side. Cherry would retire to the pit area, and Schott would rejoin the field for the restart after the red was lifted.

On the restart – Weller once again jumped out to the lead and started to put a considerable distance between himself and the rest of the field. Lapped traffic came into play early, and while Weller seemed to get through the lapped cars relatively easily – second place competitor, Paulie Colagiovanni made contact with a lap car, doing a 360 spin in turn 4 and continuing without a yellow. Colagiovanni dropped to fourth position after his spin, but the young driver would soon find himself with a chance to get back up on the podium. Carberry, who started eighth had now made his way up to second and set his sights on Weller for the top spot.

Carberry got a much needed caution on lap 10 when Ryan Stillwaggon blew a right rear tire in turns 1 and 2 while he was battling for position further back in the field. While stopped, Carberry made contact with the 11 machine sending him bicycling into the air – luckily the 47 car was not damaged and would continue. Stillwaggon, who seemed to have no luck on his side all night retired his car to the pit area. When the green flag came back out, Carberry started to the outside of Weller, “I knew I wanted to slide Weller; I thought that would be our best chance to get a clean pass on him before lapped traffic” said Carberry. The slide job happened in turns 1 and 2, and soon after Locke, and Colagiovanni followed suit by getting past Weller.

“I’m just relieved to get that first URC win,” said Carberry after his win, “I started URC in 2016 and I honestly thought I would have more wins by now but we just haven’t been able to finish races like we have this year, so that definitely helps.” Bad luck has seemed to plague the green and black number 47 over the years but he said “Grandview has been good to me and has always been one of my favorite tracks…feels pretty good to come from 8th starting spot too – lots of good cars to try and pass.” Before the race and after she picked him the 8 in the redraw, Adam’s wife said Adam asked himself “What would Kyle Larson do?” The answer to that question was clearly to win.

The KSE hard charger of the night went to Ryan Taylor who started from the fourteenth position and finished fourth. Davie Franek, Matt Tanner, and Troy Betts were credited with the three heat race wins.

The United Racing Club will be off for a few weeks before returning to action Saturday, August 15 at Delaware International Speedway. After the first appearance of 2020 was rained out, the club is anxious to get back to the Delmar oval. The championship battle is heating up between the 2018 champion, Josh Weller and Adam Carberry who is looking for his first URC Championship. Only 11 points separate the two drivers with only five races left in the season.