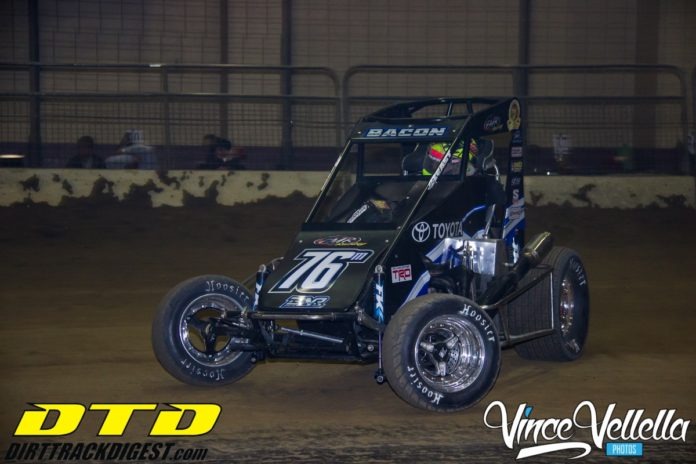 Du QUOIN, IL – Some of the biggest names in midget racing have begun to file their entries for the second running of the “Shamrock Classic” Saturday, March 18 at the Southern Illinois Center in Du Quoin. The $3900-to-win USAC Midget National Championship season opener brings the series indoors to showcase the intense open wheel action on the 1/6-mile indoor dirt track that has routinely provided some of the most memorable races each season.

The two most recent USAC Midget winners at the Southern Illinois Center have signed on to compete for the Clauson/Marshall Racing team at Du Quoin. Fremont, California’s Shane Golobic will attempt to defend his “Shamrock Classic” victory in the CMR/Matt Wood Racing No. 17w. Indianapolis, Indiana’s Tyler Courtney, a Southern Illinois Center winner in last December’s “Junior Knepper 55,” will pilot the CMR No. 7BC. Filling out the CMR stable is current USAC AMSOIL National Sprint Car point leader Justin Grant who won last Friday’s Sprint season opener in Ocala, Florida. The Ione, California native won his first ever start in the CMR No. 39BC in a Chili Bowl preliminary night feature in January.

In addition, Broken Arrow, Oklahoma’s Brady Bacon is back in the saddle of the FMR No. 76m for the 2017 USAC season. The two-time USAC AMSOIL National Sprint Car champ, won last season’s “Jason Leffler Memorial” in Wayne City, Ill. and finished third in series points.

Further early entries include Collinsville, Oklahoma’s Tyler Thomas who finished in the runner-up spot in last August’s “Tuesday Night Thunder” in Fairbury, Nebraska and is always an exciting one to watch. Herculaneum, Missouri’s Tony Roney finished fifth in the 2016 “Shamrock.” Up-and-coming Fairland, Indiana driver Gage Walker showed much improvement throughout last season and aims to be a contender on March 18.

Last year’s “Shamrock” brought 54 midgets to battle it out for the “Pot of Gold” trophy and many additional entries are expected to be filed within the next couple weeks leading up to raceday.


Free entry is available for all “Shamrock Classic” competitors courtesy of R.E. Griesemer at https://usacracing.ticketspice.com/shamrock-classic-at-du-quoin-entry. Use the code regriesemer. The deadline for pre-entry is Monday, March 13. Entries filed after March 13 are $40.