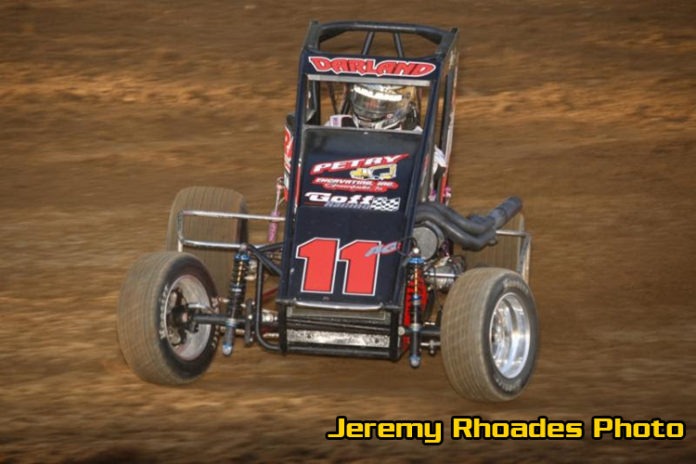 Darland is one of just six drivers to have claimed titles in USAC’s National Midget, National Sprint and Silver Crown divisions during his career. The Lincoln, Indiana veteran will be in the seat of Gray Racing No. 11 in which he aims to find victory lane in the series for the first time in three seasons. During his illustrious career in which he has amassed more than 100 USAC victories, 30 of those came in a USAC National Midget event, ranking him 11th all-time.

Boat picked up his first three career USAC National Midget victories in 2016, all within the span of a week in early August. The first of which came at the bullring of Jefferson County Speedway in Fairbury, Neb. before sweeping both nights at Belleville to close out the weekend. The Phoenix, Ariz. driver is a two-time Rookie of the Year in both the USAC National Midget and National Sprint divisions and is the son of 1995 USAC Western States Midget champ and 1998 Indianapolis 500 pole sitter Billy Boat.

Collegeville, Pennsylvania’s Bright is renowned for his success in a midget on a resume that is highlighted by a 2016 ARDC title as well as a preliminary night feature win at the “Chili Bowl Midget Nationals” in Tulsa, Oklahoma in January of 2016. Bright has made 40 career USAC National Midget feature starts, including a second-place finish at Lawrenceburg (Ind.) Speedway in 2012, but is still seeking his first trip to victory lane.


Christopher Bell, a USAC National Midget champion for KKM in 2013, will pilot the No. 21. The versatile Norman, Oklahoma native recently won the NASCAR Camping World Truck Series event at Atlanta Motor Speedway. Tucson, Arizona’s Jerry Coons, Jr. is one of just six drivers part of the exclusive USAC Triple Crown Club. A pair of first-time USAC AMSOIL National Sprint Car feature winners from 2016 have signed up to rumble at Du Quoin. Brent Beauchamp of Fairland, Ind., is entered in his own No. 11 while Kyle Cummins of Princeton, Ind. intends to make his USAC National Midget debut.

Entries continue to pour in for the $3900-to-win USAC Midget National Championship season opener which brings the series indoors for its only points race of the season. Last year’s “Shamrock” brought 54 midgets to battle it out for the “Pot of Gold” trophy and many additional entries are expected to be filed within the next couple weeks leading up to raceday.

Free entry is available for all “Shamrock Classic” competitors courtesy of R.E. Griesemer at https://usacracing.ticketspice.com/shamrock-classic-at-du-quoin-entry. Use the code regriesemer. The deadline for pre-entry is Monday, March 13. Entries filed after March 13 are $40.